Azkend 2: The World Beneath is a decent way to spend a few minutes or hours when you're in the mood for match-3 gameplay and you're sick of Bejeweled and its many clones. The game previously was released on a wide variety of platforms that includes iOS, Vita, Xbox One and even BlackBerry devices, so you know going in that there must be something to it. But is a good enough to stand apart from the crowd, nearly 6 years after its debut?

In Azkend 2, players are introduced to a heroine who is on board a ship when suddenly a swirling vortex drags the vessel beneath the ocean waves and deposits it in the incredible world that lies beneath the water resurface. When I say "incredible," I mean that in the literal sense. There's no way I can believe that a sprawling country and ancient civilization could exist in such a place. It's even less likely here than in the myths of Atlantis, or the Jules Verne novel about an expedition that heads to the center of the earth and finds a whole new realm instead of just a molten core. 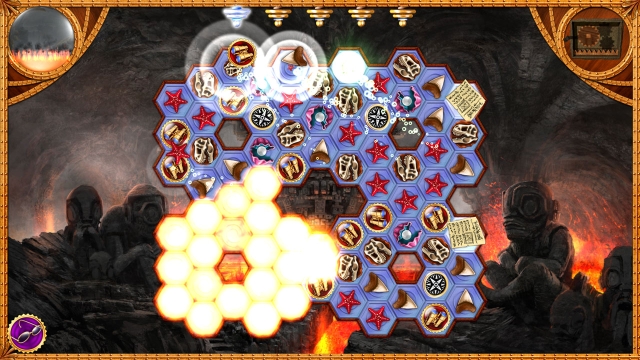 So the plot is ridiculous, but the game that builds upon that shaky foundation for the most part works quite well. As noted,Azkend 2 is a match-3 experience, but it actually has more in common with something like Puzzle & Dragons than it does Bejeweled. You select a piece from somewhere on the available playing space, then connect it to at least a couple of more pieces bearing the same design to clear them all in a sparkling combo that allows additional pieces to drop from above so you can continue making matches. It's a familiar design, made more complex by a variety of complications that are sometimes delightful but other times just frustrating.

Consider your typical match. At a minimum, it will score you some points and maybe drop more pieces in place that (if luck is on your side) give you the opportunity to string together a huge combo a few turns later. However, just because you can make a match--even an apparently very good one--doesn't mean you should. Tesla coils appear at the top of the screen, and you can power them up by making several matches in a row that change the color of underlying tiles from gray or beige to blue. When fully powered, the coils unleash a series of sparks that can clear difficult pieces from the board and give you a better chance of success. Often, then, the first combo you spy is a waste of time because it may prevent that charge from occurring... or reset the meter just before sweet success.

Special active and passive skills add another wrinkle to the proceedings. You gain access to them as you advance through the campaign, but can only equip one of each type of skill at a time. One might produce hammer pieces, which you can match to helpfully remove several pieces at random. Meanwhile, a passive skill might extend the timer or increase the likelihood that good pieces will drop as you remove the crummy ones from the board. Progressing through the campaign requires players to mix and match those power-ups, since no one pair is right for every scenario. After all, your goal isn't always simply to clear a board before time expires (though that is the most common objective). You might instead have to solve a puzzle level, where every move counts and you have as long to decide as you like. Or you might have to quench a spreading fire, snatch up flower petals or make quick matches to rid yourself of a growing insect infestation. 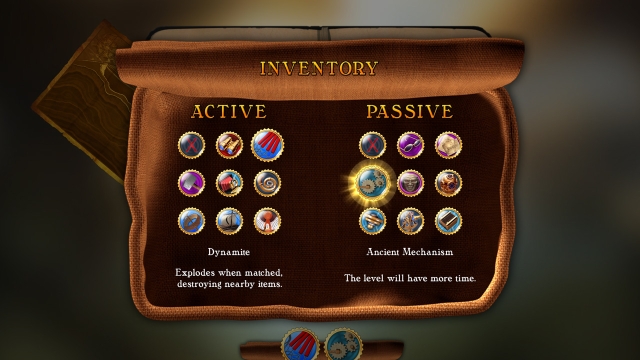 When I began the campaign, I found that the Pro Controller was quite capable of letting me make the matches I wanted to make. However, that changed by the time I reached the campaign's halfway point or thereabouts. Suddenly, the timer was so merciless that every fumble hurt my chances at scraping together even a meager victory. Fortunately, touchscreen controls are an option, and it's clear to me the game is meant to be played in that manner. However, even that method has issues. The one I run into is that my fingers hide what I'm trying to see as I attempt to trace out a chain of pieces that will form a nice combo. Some of the larger boards require quite a lot of precision, and it's difficult to see what you need to see when your finger is moving all over the place and blocking the view. Such a control scheme works in a lot of other games, where the playing space isn't so busy, but Azkend 2 sometimes demands a bit too much from all but probable puzzle fiends.

Luckily, the occasional break is built right into the progression. Every three or four stages, you get to look at a large mural with a circular space in the upper right side of the area that depicts part of that picture zoomed in a bit. Then you just need to tap on the appropriate portion of the screen to make a match. If you make enough quick matches before time expires, you gain an advantage in the ensuing handful of stages: your Tesla meter starts with a partial or even complete charge. The artwork in such instances can really be quite beautiful, and you have a better chance also to enjoy the game's surprisingly epic musical score. I actually wish there were more stages along those lines, since I found them quite enjoyable even though some of the later ones were also frustrating because the matches are so difficult to make. 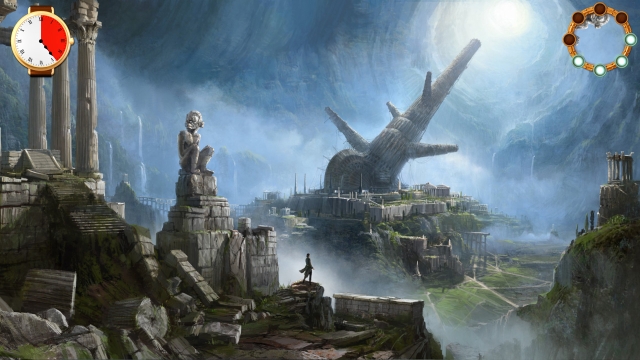 If you tire of the campaign, you can also try the "Extras" mode. It consists of menus that let you adjust the sound volume and so forth. I'm not sure why it's called "Extras" and not just "Options." The good news is that there really is alternate content. The "Challenges" mode, also accessible from the title screen, lets you either play against the clock as you try for a high score that will place you favorably on the leaderboard, or you can tackle familiar stages and try to clear them more quickly than usual in exchange for virtual medals. There also are a variety of achievements to try for, which you can view from the pause menu. They compliment you for playing the game in more inventive ways, but are easily missed and not particularly important within this edition of the game.

There are quite a few match-3 games available for consoles, handhelds, and PC. Hundreds and hundreds of them. Azkend 2: The World Beneath is different enough to be somewhat memorable, particularly at this early phase in the Switch's life cycle. You could certainly do much worse, but the overall experience is also not exciting enough or fresh enough to warrant an excited recommendation. It'll fill a few minutes or hours here and there, like I said. If you buy it expecting only that, you're unlikely to be disappointed. If you want the next Bejeweled or Puzzle & Dragons, though, keep searching.

If you enjoyed this Azkend 2: The World Beneath review, you're encouraged to discuss it with the author and with other members of the site's community. If you don't already have an HonestGamers account, you can sign up for one in a snap. Thank you for reading!

© 1998-2021 HonestGamers
None of the material contained within this site may be reproduced in any conceivable fashion without permission from the author(s) of said material. This site is not sponsored or endorsed by Nintendo, Sega, Sony, Microsoft, or any other such party. Azkend 2: The World Beneath is a registered trademark of its copyright holder. This site makes no claim to Azkend 2: The World Beneath, its characters, screenshots, artwork, music, or any intellectual property contained within. Opinions expressed on this site do not necessarily represent the opinion of site staff or sponsors. Staff and freelance reviews are typically written based on time spent with a retail review copy or review key for the game that is provided by its publisher.