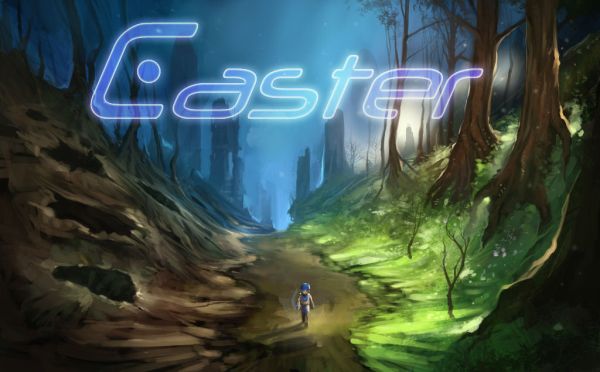 Something is happening. I'm not sure what it is, but it's grim. You see, the "flanx" have appeared and no one is safe. What are the flanx? I don't know. Most of them are tremendous bugs, but others are vicious plants, armored fish or pulsating bumps in the ground that pose no threat. Thankfully, though, you're a caster and you can smite these menaces like no other. What is a caster? I couldn't tell you.

Caster thrusts you into a world in peril, but doesn't offer you any details whatsoever. It only says that you're a type of warrior called a caster, and you kill flanx because they're pesky. For some reason, you're able to fire projectiles that not only obliterate flanx, but also heal withered trees. Again, the game doesn't address any "why" questions, so you're better off just running with any confusing devices it tosses your way.

Thankfully, Caster is a simple third-person shooter. You run around a small, open arena and complete one objective before moving on to the next map. That goal might involve collecting all energy balls from the area, slaying every flanx or healing a particular tree. Combat is intuitive if you've ever played a third-person shooter and works wonderfully with a mouse and keyboard. You might even find Caster strangely addictive at first because it's so fast-paced and smooth.

At least until you've fought your share of battles... 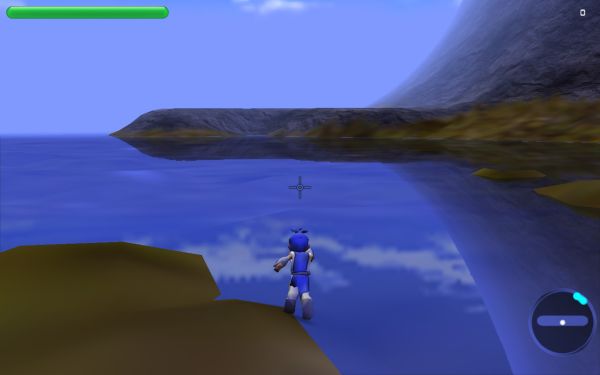 As you might have gleaned from this review's introduction, Caster's content screams "incomplete." For starters, its environments are basic and shallow, almost lifeless. You see miles of real estate filled with standard hills and simple grass and dirt textures, dotted by the occasional tree. Sometimes the ground is so nondescript that it looks like you're wading thorough gallons of feces. Outside of the area dwells an empty, soulless haze or dull cloud cover. Caster's stages couldn't be more disconnected from its world. Rather than lively levels, the game's missions are characterless slabs of terrain that bear few noteworthy features or standout qualities.

The foes that populate these slapdash locales don't improve the experience, either. For the most part, you trade shots with stock enemies, including scorpions, beetles, flies and crickets. However, each creature's AI routines are anything but standard, and range from strange to dumb. In one stage, you blast crickets while negotiating pools of acid that damage both you and your enemies. When you nail a cricket, it leaps into the air and showers you with bullets. When it lands, it sits still until you shoot it again. More often than not, these insects jump into the acid and remain there until they die. Other adversaries, upon receiving damage, pull one-eighties and run away, leaving themselves susceptible to repeated blasts. For the first three-quarters of the campaign, you deal with flanx that ostensibly have death wishes.

Later on, though, you'll wish for the suicidal ones. A few areas pit you against tiny, incredibly fast flies that pulverize you with dozens of bullets. Their intense speed and diminutive size render them difficult to kill. These guys are so fast that not even your homing attack, called "seeker," can reach them. If you're lucky, you might be able to stun them before unleashing a full wave of seeker discharges. Sadly, the paralysis wears off before most of your seeker shots even reach their targets. Worse than that, these guys are one of only a few "challenging" enemies that crop up in the latter portion of Caster's campaign, having appeared in new missions that popped up after the game's initial release. It's as if the developers knew its original bestiary were pushovers and decided to make up for that by adding a bunch of cheap, annoying adversaries to the mix. 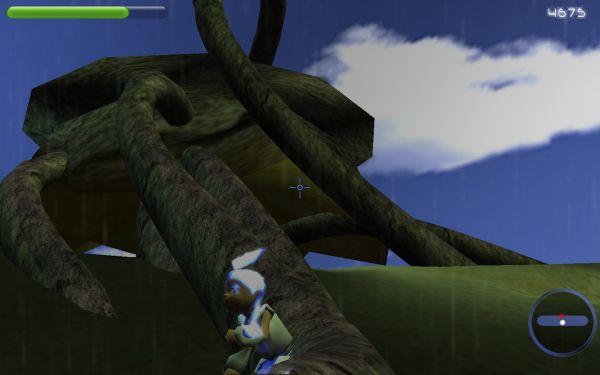 I do have to commend Caster on couple of factors, though. For one, it sports a variety of blasters with different abilities. For instance, a couple of them either raise or lower the ground level. You obtain the former of those two in a stage surrounded by lava, crawling with critters that are immune to your weaponry. Luckily (and perhaps illogically), they are injured by fire, so you can annihilate them by creating holes full of lava and luring the pests into the resultant pools.

Terrain alteration plays a huge role in Caster. Although you receive two arms specifically built to warp the land, the rest of your arsenal also reshapes it. Any time your standard attack connects with the floor, it leaves a tiny crater. After upgrading that weapon enough times, it'll fire so powerfully and rapidly that you can easily tunnel down into the earth. Thankfully, the protagonist is capable of running up sheer mountainsides, so you typically won't get stuck.

I say "typically" because the truth is you can get stuck fairly often, especially at the worst moments. I'm not sure what causes this phenomenon, but it appears to be linked to any altered ground. During one mission, I ran afoul of a swarm of the aforementioned flies. We fought furiously, leaving so many pockmarks in the ground that I got trapped a few dozen times before emerging victorious. Bear in mind that I died once on the road to victory, and contemplated snapping my keyboard in half. During another excursion, I had to guide a transport across an acidic lake. To accomplish this, I had to constantly use my ground-raising shot to create a road for the vessel. The only problem is I kept getting stuck in the environment, and the vessel would mosey ahead of me into the acid and perish. 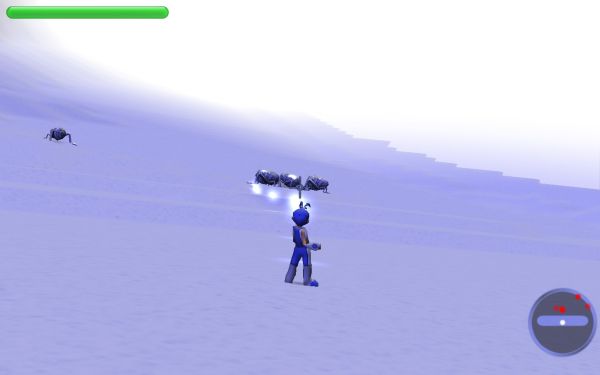 All of the flaws I've listed smack of "Early Access." Unfortunately, that program hadn't launched at the time of Caster's release, so it's likely the game went forward in an incomplete form. Remember, the developers added several new missions a year after the game's initial release. These aren't DLC quests, either, but a whole chunk of the campaign. If you need any further convincing that Caster isn't a done deal, then consider the game's three closing words: TO BE CONTINUED. You then receive a message telling you to check the game's official website for further developments.

I'm not saying Caster couldn't eventually be a good action title, given an overhaul and loads of patches. However, the game is eight years old as of this review. There's only been one significant addition since 2010, and that was a cel-shading feature tacked on in 2015. Due to its incompleteness, banal stage designs and unbalanced enemies, I can't give Caster my stamp of approval. Rather than waiting for a slew of fixes to flesh out this lifeless shooter, you're better off skipping it and nabbing superior products.

If you enjoyed this Caster review, you're encouraged to discuss it with the author and with other members of the site's community. If you don't already have an HonestGamers account, you can sign up for one in a snap. Thank you for reading!

© 1998-2021 HonestGamers
None of the material contained within this site may be reproduced in any conceivable fashion without permission from the author(s) of said material. This site is not sponsored or endorsed by Nintendo, Sega, Sony, Microsoft, or any other such party. Caster is a registered trademark of its copyright holder. This site makes no claim to Caster, its characters, screenshots, artwork, music, or any intellectual property contained within. Opinions expressed on this site do not necessarily represent the opinion of site staff or sponsors. Staff and freelance reviews are typically written based on time spent with a retail review copy or review key for the game that is provided by its publisher.