Worcle Worlds is a new puzzle title from Lightwood Games that asks players to save ten worlds from a nightmarish existence without words. If you knew some of the people I know, you might not feel inspired to enact such a change. Me, though, I'm a glutton for punishment. I also happen to like word games quite a bit, so I expected to have a great time with this one.

Play begins as you access the first world, which only asks that you form 3-letter words or better (longer ones yield more points). Later stages produce other restrictions, by preventing certain useful letters from appearing, by requiring 4-letter words or something similar. Most of the stages aren't very difficult, and they all end once you form 50 suitable words. 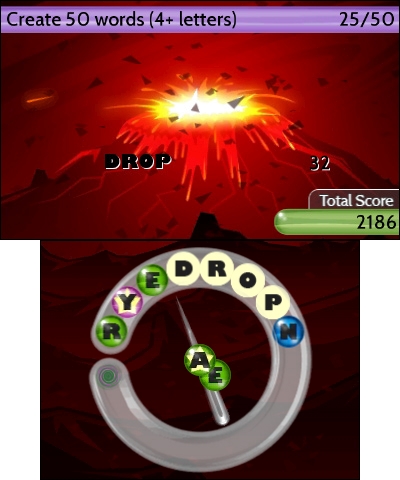 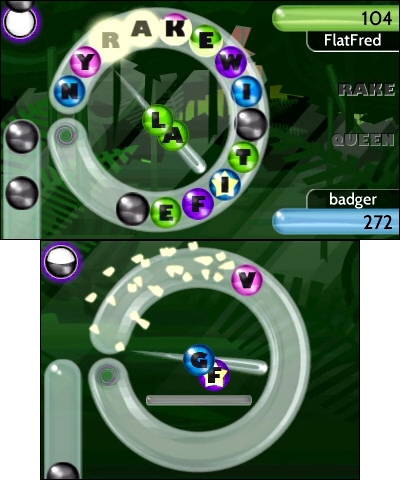 Forming those words requires you to place letters on a circular field that resembles a wheel (a "word circle," if you will). A round starts with several letters already in place, and you aim a dial using either touchscreen controls, or the face buttons and d-pad or analog stick. Then you fire and the current letter joins the motley crew already waiting, hopefully forming a word in the process. There's no timer in the default mode, so you can take as long as you like to decide where to insert a letter. The next one you will place, along with the one that will follow, is always displayed. This allows you to strategize somewhat, but not necessarily enough to persevere once the going gets tough. As long as you don't fill up the wheel with unused letters, which immediately ends your run, you'll generally be in good shape.

When I playedWorcle Worlds, I believe I failed a stage only once while clearing the first nine. That was just because I got careless and impatient, since the game wasn't really challenging me and 50 started to feel like a bloated number. Then I hit the tenth stage and spent several unsuccessful hours--and many, many attempts--trying to clear it. I came within a word or two a couple of times, which was demoralizing when everything fell apart at the last minute. Aside from that last stage, though, the game was actually quite pleasant and very manageable. Its simple but effective visuals, combined with soothing background music, provided a nice way to relax after an exhausting day.

Worcle Worlds does feature additional modes, including a Time Attack mode that allots you three minutes to form as many words as possible while adhering to the rules of the particular world you select. This is a nice challenge if you like to add a little stress to the experience, and to test yourself to see if you can do better, but its replay value is somewhat diminished by the random nature of the game. You might perform really, really well if the right letters materialize, or you might put forth similar effort and secure a miserable score because none of the right vowels or consonants decided to appear. This is the same issue that made that last conventional stage such a chore for me. I don't see how the developers could have gotten around it, really, but it is an issue. 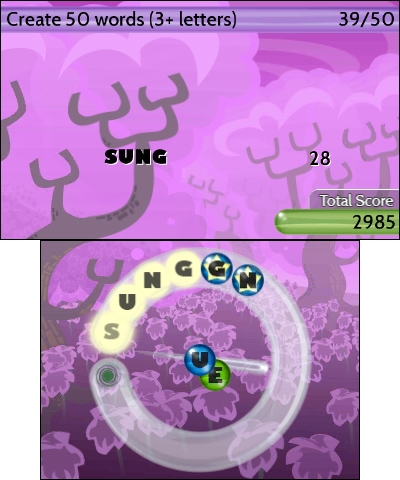 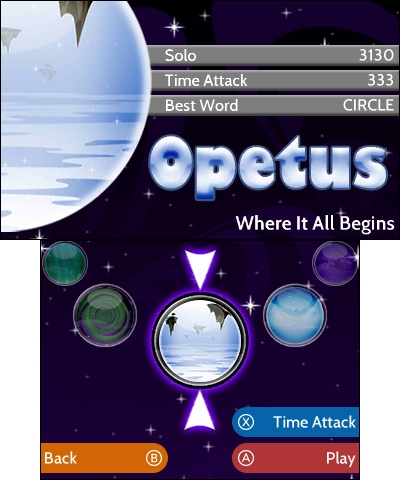 Multiplayer options also exist, along with online leaderboards, but there doesn't seem to be a large audience anywhere in the world forWorcle Worlds. I placed in the top ten globally on several stages, more than two weeks after launch. This feat I managed even on the last stage, despite not successfully clearing it. When I tried looking for an online opponent, it perhaps goes without saying that I was unable to find one. Local play is also offered, so you can set up a lobby and challenge your friends, but I don't have a lot of nearby friends who are into this type of challenge.

Worcle Worlds is a solid experience throughout most of its brief duration, if you're the sort who enjoys word games. I consider it a good way to fill a few solitary minutes or hours in my day, when I just want to relax with words and my 3DS, but the rather hefty $9.99 MSRP and somewhat limited replay value mean you might want to wait to download your own copy until you catch it on a half-price sale. Outside such a scenario, only true logophiles need apply.
3/5

If you enjoyed this Worcle Worlds review, you're encouraged to discuss it with the author and with other members of the site's community. If you don't already have an HonestGamers account, you can sign up for one in a snap. Thank you for reading!

© 1998-2021 HonestGamers
None of the material contained within this site may be reproduced in any conceivable fashion without permission from the author(s) of said material. This site is not sponsored or endorsed by Nintendo, Sega, Sony, Microsoft, or any other such party. Worcle Worlds is a registered trademark of its copyright holder. This site makes no claim to Worcle Worlds, its characters, screenshots, artwork, music, or any intellectual property contained within. Opinions expressed on this site do not necessarily represent the opinion of site staff or sponsors. Staff and freelance reviews are typically written based on time spent with a retail review copy or review key for the game that is provided by its publisher.