Arguably, the worst part of my love for Kirby's Adventure  a game I've reviewed not once but twice  is that I've spent a lot of years waiting for a new entry in the series that could exceed that one in my mind. I've wound up being disappointed with each and every one I've played, though. They're not bad games; they just haven't been able to recapture the magic I found in that glorious NES cartridge. 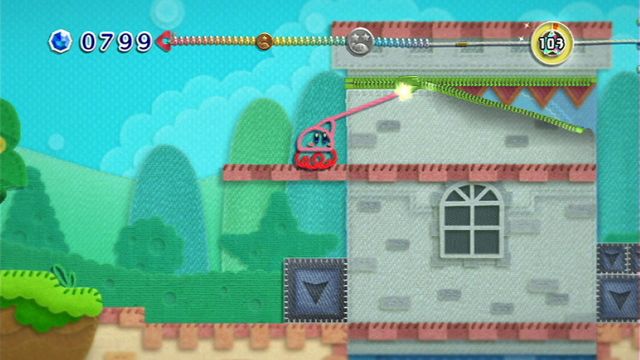 To its credit, Kirby's Epic Yarn comes close enough that instead of feeling disappointment, I just want to pat the people from HAL Laboratory on the back and tell them they're almost there. Released for the Wii in 2010, it wasn't originally designed to be a Kirby game at all. Instead, it was supposed to feature someone named Prince Fluff, who would play through several lands in a world made of yarn while searching for his lost mother. Apparently, someone decided this game needed an established character people would actually spend money to control. And so, Prince Fluff got demoted to sidekick and Kirby took center stage.

As was to be expected, the plot is simple. A wizard named Yin-Yarn encounters Kirby and banishes him to Patch Land. Upon gaining his bearings, Kirby realizes he's now made of yarn and, in fact, the entire world around him consists of various sorts of fabric. After Kirby meets Prince Patch, the duo work to unite the many regions of Patch Land, which have been separated. Meanwhile, Yin-Yarn decides that with Kirby trapped in Patch Land, he might as well take over Dream Land. And let's face it: with King Dedede running the show, his success in that task is a foregone conclusion.

In some respects, it's obvious Kirby wasn't to be the original star of this game, as his moves are different than usual. Being made of yarn, he's incapable of gulping down enemies to steal their skills, which takes away his most reliable form of attack. Instead, he uses his new body to whip at foes, either dismantling the yarn composing their bodies or grabbing it and rolling it up to serve as his own projectile to send at other baddies or obstacles. To add some variety, he'll also regularly find little vortexes that transform him into one of a variety of vehicles ranging from a tank to a car to a U.F.O. 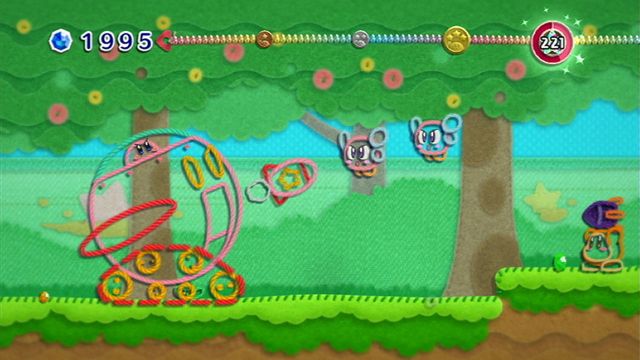 For the most part, these vehicles add a lot to the game. Each has its own control scheme. If you're in a tank, you'll slowly move from left to right, firing missiles at foes. In the car, you'll be racing against other characters, attempting to grab turbo boosts while avoiding hazards. Get the fire truck and you'll be using its jet of water to put out fires on your path, while the U.F.O. will fly through the air, sucking up enemies in order to power up an electrical discharge capable of destroying obstacles.

Really, the only vehicle I found annoying was the train. For the most part, this game completely ignores the Wii's motion controls, allowing you to simply turn the Wii Remote on its side and treat it like a regular control pad. However, whenever you're burdened with the train, you're placed in motion control hell where you have to use it to create tracks for your train to clear obstacles, as well as grab the many items suspended in mid-air. Making these parts more annoying is the lack of enemies; you simply have to fiddle with the controls to get your train past a handful of screens where the only challenge is keeping a steady enough hand on the controls to get your engine where it needs to go.

But that's a minor annoyance (only rearing its head in three or so levels) in a game full of goodness. The game's art style works wonders and creates a lighthearted, whimsical vibe, as everything from characters to backgrounds looks like it was knit together. There is an impressive amount of variety throughout the stages, as well. You'll ride dinosaurs, swing over chasms, sprint through cottages and travel underwater. When you think about it, most of these locations are similar to those found in other 2D platformers, but the art style makes them feel fresh again. 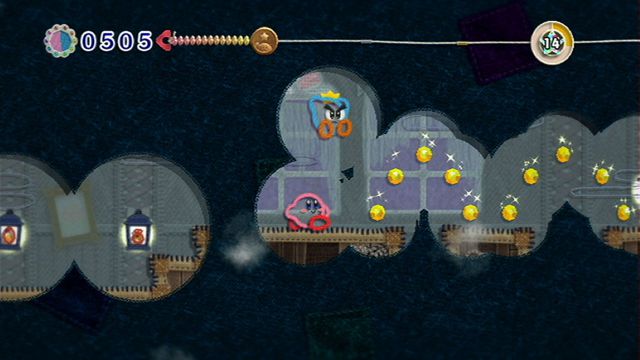 And, much like Kirby's Adventure did, Epic Yarn serves as a great example of stress-free gaming. Not only are its levels generally easy to clear, but it's actually impossible to die. Throughout each stage, you'll spend a lot of time collecting beads and the only cost for getting hit by foes or falling into pits is the loss of some of those items. Unless you're in an auto-scrolling region, losing them via getting hit isn't necessarily "losing" them, since you'll have a decent amount of time to regain them before they actually disappear for good. The pits can be a different story, as whenever you plummet off the screen, a guardian rescues Kirby and carries him to the nearest safe land, while you drop currency the entire time. On some levels, one such miscue can prevent a player from obtaining a gold medal, as it'll be difficult (or even impossible) to wind up with enough beads.

If the bulk of this game has any sort of actual challenge factor, it lies in getting the best medal possible on each stage, although that's only really necessary in the case of boss fights. If you exceed the gold medal requirement by enough in these confrontations, you'll get a patch allowing you to access that world's bonus levels. Many of those simply deliver trickier challenges for fans of Kirby's vehicles, but others are a good bit tougher than anything you'll see in the mandatory stages (in particular, an auto-scrolling level where a barrage of bombs threatens to not only steal your beads, but eliminate platforms so you can't reach the largest caches of them, as well as other collectibles such as furniture and CDs).

Grabbing CDs throughout the adventure gives you alternate musical selections, but the items also have a different purpose. At the beginning of the game, Kirby is given a dwelling in the small town near Prince Patch's castle and can choose to collect furniture and decorations for it, both by purchasing them at local stores and by finding them in stages. More importantly, Kirby's apartment complex grows to eventually contain five other tenants, assuming he can find the right decorations for each of their apartments and induce them to be his neighbors. In return for Kirby's efforts to furnish their homes, each neighbor provides Kirby with a mini-game, with new challenges being unlocked as you complete more and more levels. The first guy you meet plays hide-and-seek, so you'll get to play through decent-sized chunks of previously-cleared stages to find five clones of him within a time limit. The next tenant will have you collecting a certain number of beads (also within a time limit), while other guys will challenge you in monster-slaying, carrying them to a specific location and simply racing them to a destination. 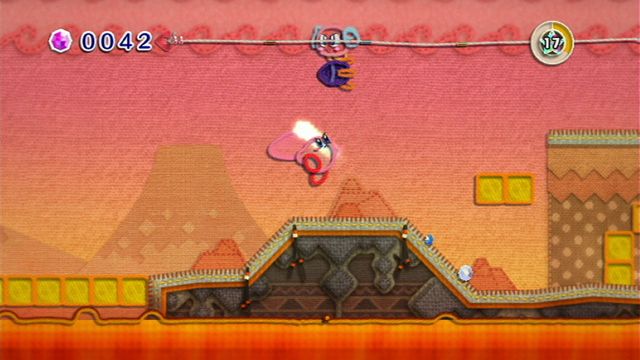 On one hand, the bonus games have a purpose, since they can provide some extra challenge for players who feel that the game itself is too easy. Take the tenant whom you have to carry through parts of stages, for example. While you are holding something, you can't do things such as swing from place to place, so you'll have to drop or throw your partner regularly in order to advance past obstacles. With a running clock and tougher enemies working against you, it's easier to make little mistakes that result in you losing a few precious seconds. With the clock often being fairly strict, that is definitely not a good thing. It'll take a while to get through these challenges, too, as each tenant has about 20 for you to undergo if you want to get all the wallpaper designs that constitute their prizes.

That last sentence also sums up my issue with this stuff. Several older Kirby games also kept track of what percent had been completed, with progress leading up to a potential confrontation with the true final boss. If you didn't hit all the hidden switches in Kirby's Dream Land or do each level's "side quest" in Kirby's Dream Land 3, the game would end after you defeated Dedede. However, if you'd done everything, you'd find out the king had gotten himself possessed by a malevolent force and you'd get to take on the actual evil-doer behind Dream Land's problems. Not so here. You collect furniture to gain tenants. You gain tenants to do challenges. You do challenges to get wallpaper designs. You collect those to reach 100 percent. And that's that. Yin-Yarn is the final boss and there are no challenges beyond him, other than the two levels you get for collecting enough gems during his fight (just like with every other boss in the game). A true final boss or frivolous prizes: which would you prefer? I know my answer.

I liked Kirby's Epic Yarn a lot, but didn't find it to be as satisfying as Kirby's Adventure when all was said and done. The yarn-themed graphical style was a nice touch, and the ability to transform into a variety of vehicles was a nice trade-off for not being able to inhale foes to steal their powers. The fact the game was super-easy didn't bother me, as it was enjoyable to simply master stages to see how many beads I could collect. But making it necessary to endure a lengthy and tedious collection of mini-games to get 100 percent completion and then giving no legitimate payoff for doing so somewhat mars the overall experience, leaving this to exist as a really good game that falls a bit short of being a true classic.

If you enjoyed this Kirby's Epic Yarn review, you're encouraged to discuss it with the author and with other members of the site's community. If you don't already have an HonestGamers account, you can sign up for one in a snap. Thank you for reading!

© 1998 - 2022 HonestGamers
None of the material contained within this site may be reproduced in any conceivable fashion without permission from the author(s) of said material. This site is not sponsored or endorsed by Nintendo, Sega, Sony, Microsoft, or any other such party. Kirby's Epic Yarn is a registered trademark of its copyright holder. This site makes no claim to Kirby's Epic Yarn, its characters, screenshots, artwork, music, or any intellectual property contained within. Opinions expressed on this site do not necessarily represent the opinion of site staff or sponsors. Staff and freelance reviews are typically written based on time spent with a retail review copy or review key for the game that is provided by its publisher.