Remember when console generations were measured by bits? The graphics in those classic games weren't always great, but they were the best anyone had seen up to that point and besides, the gameplay mostly made up for any technical shortcomings. There's a reason so many fledgling developers keep trying to mimic their style even now, some 30 years later. Those developers know that if they can offer experiences akin to the ones gamers enjoyed during their youth, those gamers may very well respond by reaching for their wallets.

Tiny Barbarian DX, a new release from StarQuail Games, seems to have been designed specifically to trigger just such a sequence of events. It features four extended episodes of platforming action, complete with swordplay, spectacular leaps, fearsome boss battles, rousing musical compositions, and graphics that would fit right in with some of the greats from the PlayStation era. It's clear the developers played and enjoyed some great games from yesteryear, and the project that history inspired is a competent--sometimes even exemplary--throwback to a simpler time. Unfortunately, sometimes it's also just a big pain in the butt. 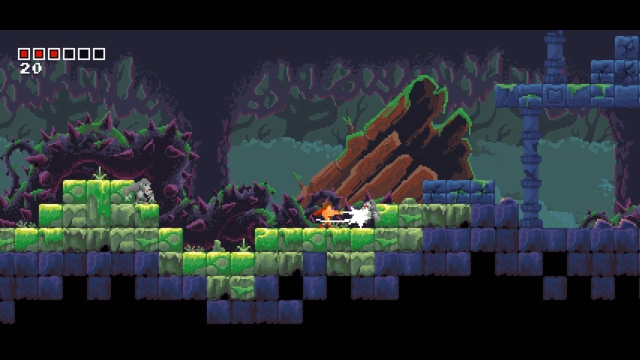 In each episode, the player assumes the role of the eponymous barbarian, who for one reason or another must navigate a series of challenging stages linked by a Castlevania-style map. The selection of enemies he encounters on his way through a new episode is different each time. The environmental hazards also change, and the type of feats the hero must perform to reach the end of each stage in one piece. This was a smart design decision, as it allowed the developers to keep the experience fresh for longer than might otherwise have been possible. It does mean there are occasional dips in difficulty level, but for the most part the game gets more difficult as you progress from stage to stage and from episode to episode.

The barbarian has a limited number of moves at his disposal. He can swing his sword straight ahead at short range, and swinging several times in rapid succession unleashes a longer strike that seems to do more damage if it connects. He also can jump into the air and sometimes produce a whirling attack that does a good job of clearing away any local resistance. His movements are generally responsive. When the situation calls for it, he can hang from ledges and pull himself to safety (like Ryu Hayabusa of Ninja Gaiden fame), or hold a vine and use it to swing across wide gaps, among other things. Sometimes an enemy will bump him, knocking him back toward spikes or a pit, and occasionally he might elect to drop from a high perch when that wasn't what you had in mind. Otherwise, the controls are more than proficient.

You'll need to take advantage of the hero's precise movements because Tiny Barbarian DX rather quickly gives up any pretense of being accessible to newcomers. Most of the first episode is quite manageable, except for a few irritating boss encounters, but from there the game becomes a harrowing gauntlet that throws players from one demanding sequence to another. New mechanics are quickly introduced, and the player is expected to put them to skillful use almost immediately. If you grew up playing the likes of Castlevania and Battletoads (among numerous others of their ilk), you shouldn't need much time to experiment before you're ready to rock; you will have encountered most of it in adventures you had decades ago. But if you let your skills grow rusty over time (or you never had them in the first place), you're in for a world of hurt. 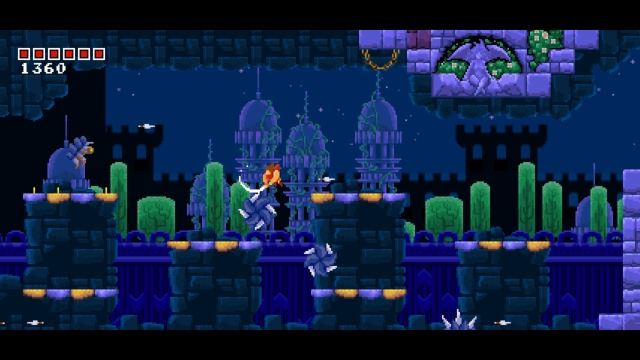 Perhaps the game's third episode demonstrates its general flow most readily. That episode begins with the barbarian standing outside a menacing tower. The front gate is locked, so he must look around until he realizes he can jump up onto a fence and from there drop into the background. As he progresses, he will need to follow the strategy regularly. Some ledges and enemies are in the foreground, but others are not. Eventually, the hero meets an armored boar, and must switch rapidly between planes to avoid being gored by the beast. In another sequence, he runs along large blocks that rise toward the ceiling the minute he sets foot on them, potentially crushing him in an instant if he is caught unawares. At multiple points, he will also circle around the tower he has been tasked with ascending, leaping from ledge to ledge while birds, spiked orbs and other obstacles try to ruin his day. If you still have nightmares of the last level in the original Battletoads, this is your chance to relive them.

Some of the challenging sequences wouldn't be so bad, if only they didn't last so long and demand near-perfection throughout their duration. There are checkpoints, so you can tackle a troublesome area as often as proves necessary. However, a number of segments simply go on too long for their own good. There is too little margin for error, and your only reward for overcoming a particularly irritating challenge is that doing so allows you to reach another one that might be even worse. 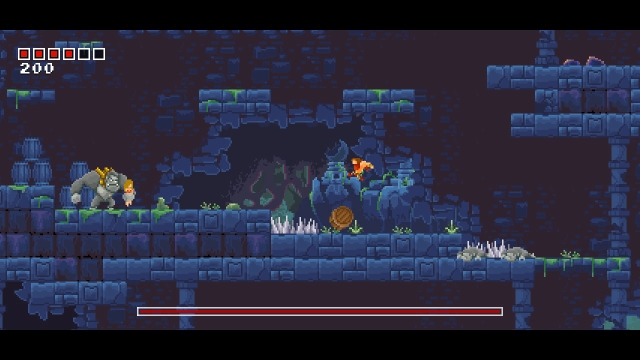 That, or you might get the chance to face off against an absurdly difficult boss. The nastiest of the enemies you encounter throughout the game make better roadblocks than walls of cement ever could. They often employ reasonably predictable patterns, but even knowing what you're supposed to do provides little reassurance that you can actually do it. Getting close enough to strike a foe often means you take damage, so you have to make the most out of every exchange and hope that you come away unscathed just often enough to outlast your rival and his over-sized life meter. It's difficult to appreciate any design creativity that's on display when it is so busy creatively grinding you into dust.

Naturally, there is a certain type of gamer who will adore the experience Tiny Barbarian DX provides. The game certainly isn't for everyone, despite offering one of the better representations of its genre in recent memory, but it knows its audience and caters to it at every turn. That sort of single-minded devotion counts for a lot, even though it's not always easy to love in the moment. Compelling elements that might attract a less skillful gamer--the kicking soundtrack, the charming retro visuals and even an occasional sense of humor--are mere distractions that do a poor job of making you forget how hard you have to fight for every bit of progress. If that's the sort of adventure you're (rather masochistically) looking for, definitely give it a shot. If you're the sort who liked a game such as Battletoads for everything but its difficulty, however, you'll probably have more fun with something more forgiving.

If you enjoyed this Tiny Barbarian DX review, you're encouraged to discuss it with the author and with other members of the site's community. If you don't already have an HonestGamers account, you can sign up for one in a snap. Thank you for reading!

© 1998-2021 HonestGamers
None of the material contained within this site may be reproduced in any conceivable fashion without permission from the author(s) of said material. This site is not sponsored or endorsed by Nintendo, Sega, Sony, Microsoft, or any other such party. Tiny Barbarian DX is a registered trademark of its copyright holder. This site makes no claim to Tiny Barbarian DX, its characters, screenshots, artwork, music, or any intellectual property contained within. Opinions expressed on this site do not necessarily represent the opinion of site staff or sponsors. Staff and freelance reviews are typically written based on time spent with a retail review copy or review key for the game that is provided by its publisher.