When I was a small child, I used to pretend I was Storm Shadow, the villainous ninja that appeared in the old G.I. Joe cartoons. He mostly wore white and so did I, aided by long underwear and socks. It sometimes gets quite cold in Oregon, so I had all of that stuff readily available. Once I was properly dressed, I stealthily sneaked through the house, flattening up against walls and peering around corners as I searched for potential victims.

In 2017, I no longer dress up as Storm Shadow (or as any other ninja, I swear!). But I still think ninja warriors are pretty cool, what with their stealthy moves and slicing and stuff. I also like LEGO blocks, an interest that predates even my Storm Shadow infatuation. And obviously, I like video games. So you would perhaps think The LEGO Ninjago Movie Videogame would delight me immensely. As it turns out, though, you would be wrong. It actually delighted me only slightly.

Based on a movie that someone in marketing clearly thought was going to be huge (and maybe it even will), the video game introduces a fellow named Lloyd. His nemesis is an older guy known as Lord Garmadon, a four-armed warlord who hopes to take over Ninjago City with an army of soldiers and mechs. Alongside his friends, fellow students of the mystical Master Wu, Lloyd will battle to ensure that good wins the day, mostly by running and jumping through a variety of stages located primarily in crowded city and comparatively empty jungle environments. When it suits the plot, Lloyd will also jump into a vehicle and blast things for a while, but mostly he's all about wall climbing and such. 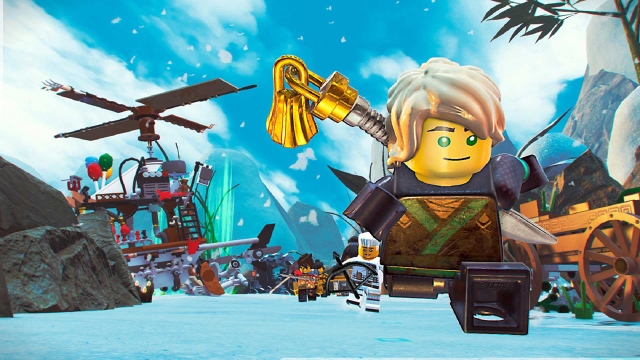 By now, you may have already played one or many games in the overall LEGO franchise. This new game feels like a lot of the ones that came before it, but with a few differences in presentation. Violence is always kept minimal, because about the worst that can happen to any of the plastic figurines is that they'll fall apart. They don't have a heart to pump blood through their veins, so decapitations needn't be a messy affair. The story progresses in humorous scenes that I assume were lifted directly from the animated feature. A lot of prior LEGO games would take famous scenes from well-known source material and then inject new humor, but in this case the jokes were already there. I'm not sure, but perhaps that's why they feel a bit tired, like a parody of a parody.

In terms of tension, there isn't much to go around because the game doesn't produce situations where the stakes feel high. As far as I can tell, you can't fail a level no matter how badly things go, just as long as you keep trying. When your characters are defeated in battle or fall in a pit, they materialize again after a short delay, minus a few studs from their total. But studs don't seem to actually accomplish much, other than that they gradually raise your ninja level... which awards you with mostly useless gold bricks but not much else. One thing I liked about some of the previous LEGO games was their sense of genuine progression. You could unlock multipliers and new loot, so deaths set you back a bit even if they didn't ruin your party.

Characters do progress, at least, but their memorable changes are tied to plot developments over which you have no control. At appointed times, they unlock their inner strength, which manifests as a spinning cyclone of magical energy that activates certain switches. But that feels redundant, because a cyclone made of fire doesn't feel a lot different from one made of earth. As you clear story-based objectives, you also get special coins you can use to unlock new abilities from a skill tree of sorts, but it's never clear what enhancement lies at the end of a given branch and that ambiguity takes away most of the potential thrill. By the time you tackle the last scenes, you are guaranteed to have every modification. Frankly, I didn't feel like my character really was much more effective at the end of the adventure than he was as it commenced. He simply had to expend less energy to gain studs. 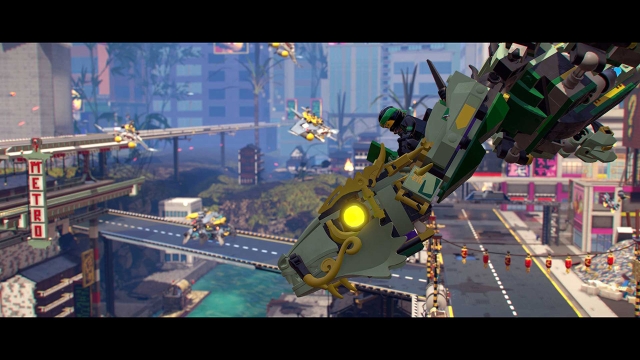 The developers did try to make combat interesting, but the characters are too overpowered right out of the gate. Which makes sense, I suppose. They are ninja warriors! Even so, it's a little too easy to dash around an area, chain combos together, and slice foes to bits. Some of your adversaries do try to guard, but you can just launch into the air and then ground pound them to make them drop their guard. Combos are also offered, but basically you just circle until you can press the A button, and then you mash Y to get in a few kicks. It all looks nice, but you'll do little better with a careful strategy than you will if you just move the analog stick around and mash a single button.

As I mentioned, the environments are mostly confined to the city and jungle scenes. They are fairly busy, with some nice sight gags in the urban areas in particular, but I would have liked a little more variety. A lot of the city scenes felt a bit cramped, and the camera didn't follow the action as naturally as I would have liked. It seemed like most of the time when I took damage, it was because I thought I'd swept the area of foes but one had somehow evaded me. He would weave his way through my meandering group of friends, who would ignore him, and I wouldn't necessarily notice his malicious intent until he was hacking at me with a weapon. Another problem I ran into is that dashes are hard to control. When I was fighting on narrow ledges or whatever, a dash could easily drop me into an abyss. 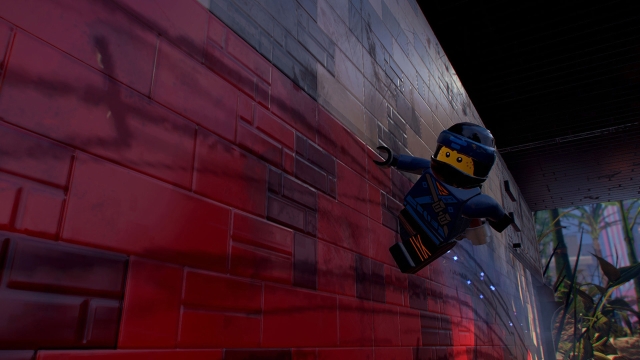 Fortunately, there are some areas where the game does the expected good job (and I think it's important to state for the record that in general, any LEGO game I've played has been mediocre at worst). Your characters run up walls and along them, swing from hanging chains, and interact with levers and such, which makes possible a variety of environmental puzzles. The simple puzzle designs don't feel particularly inventive at this point, but younger gamers should still feel smart when they figure out some of the solutions. To dig up every gold brick (even though there's not much reason to do so, except that you like collecting stuff), you'll have to search all over the sprawling stages and level hubs, getting more creative than is otherwise necessary. I didn't find even half the blocks by the time I made it to the closing credits (though I did come close), and I hadn't discovered even a quarter of the hidden characters. I also didn't spend a lot of time with the side mini-games, though they do exist do should extend the title's longevity a bit.

Overall, The LEGO Ninjago Movie Videogame feels like its developer is just going through the motions, or perhaps had to rush to meet the logical deadline. Level design is proficient but unremarkable. Character progression has a few wrinkles but stops short of being genuinely satisfying. Combat looks flashy but is empty at its core. Jokes fall flat because they lack the setup I would imagine they have if you watch the actual film on which the game is based. Oh, and load times between stages are atrocious, often taking a minute or more to put everything in place so you can tackle the next challenge. Mostly, though, the game avoids any serious blunders as it wanders from one point to the next. Its greatest weakness is that it feels equal parts competent and uninspired. I think I'll just stick with Storm Shadow for now.

If you enjoyed this The LEGO Ninjago Movie Videogame review, you're encouraged to discuss it with the author and with other members of the site's community. If you don't already have an HonestGamers account, you can sign up for one in a snap. Thank you for reading!

© 1998 - 2023 HonestGamers
None of the material contained within this site may be reproduced in any conceivable fashion without permission from the author(s) of said material. This site is not sponsored or endorsed by Nintendo, Sega, Sony, Microsoft, or any other such party. The LEGO Ninjago Movie Videogame is a registered trademark of its copyright holder. This site makes no claim to The LEGO Ninjago Movie Videogame, its characters, screenshots, artwork, music, or any intellectual property contained within. Opinions expressed on this site do not necessarily represent the opinion of site staff or sponsors. Staff and freelance reviews are typically written based on time spent with a retail review copy or review key for the game that is provided by its publisher.