As near as I can tell, years later, the date was April 7, 1990. It was my birthday. Following the usual church service, my family went to celebrate my big day in the park. I think it was a park in Madras, but that notion is at odds with a vague memory of it being The Dalles. In any event, we were in Oregon and there was water nearby and we were eating picnic food. Then I got to open my present, which I discovered was the Game & Watch edition of Donkey Kong Jr. my mom had bought at the local Radio Shack.

I didn't get to play the game right away, of course. It was a Saturday, and mine was a devout Seventh-Day Adventist family. But I got to look at it, all sleek and exciting, pressed against the cardboard square with protective plastic wrapped around its face. I got to imagine the many hours of enjoyment the little handheld device would bring me, once Sabbath passed. I know I should have been thinking about more spiritual things until sundown, as dictated by my faith. But I was just a kid. Games were pretty much all I thought about, 24/7. 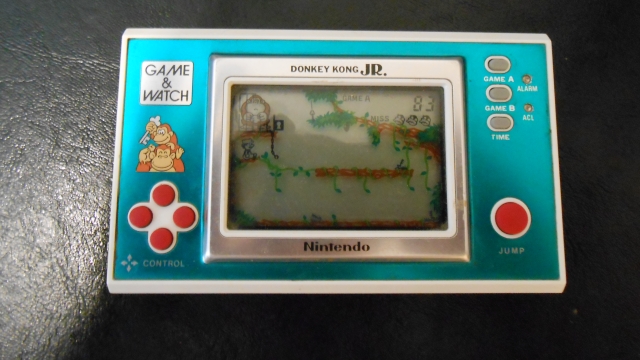 Donkey Kong Jr. in arcades and on the NES is a reasonably exciting experience, with four separate stages included. None of them look quite like the single screen the Game & Watch is capable of displaying, but the first stage comes closest. In that stage, Donkey Kong Jr. hops along some islands, climbing up vines and steering clear of traps Mario sends his way. If he can reach the top, he might just free his caged father, Donkey Kong Senior.

On the Game & Watch, artwork depicting static tree limbs and vegetation is presented on the front screen, which is transparent, while an LCD back screen is used to display simple images that change depending on circumstances. Those images depict the hero in the various available positions, with the appropriate frames of not-quite animation. When you first insert batteries, the device shows them all in a single panorama. Thereafter, you'll see only the one frame at a time, along with frames devoted to the various hazards (birds and traps) and such things.

The effect is charming and gives the illusion of actual depth. And the device had nice form factor. You could use it as a proper clock, complete with an alarm (there's even a kickstand, so you can prop it up), or shove it in your pocket and carry it with you to school. And of course, you could play the featured game on it using circular buttons that approximate a classic Nintendo d-pad, along with a single action button for jumping. It takes some getting used to, and there's a slight delay that you have to learn to utilize in order to excel at the game, but it's a neat piece of technology. Nintendo actually released a number of Game & Watch devices in the 80s, but I only owned the one. 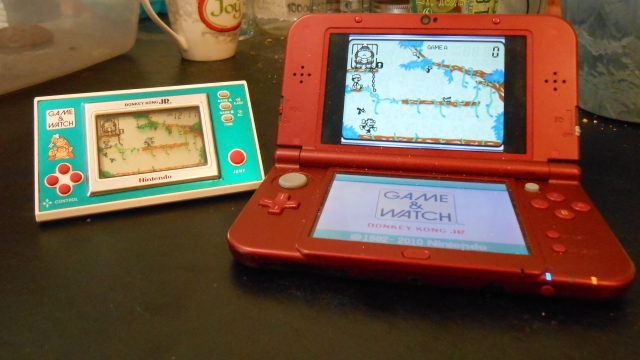 Which brings us to the DS. Nintendo decided it was time to look back on that history of classic Game & Watch releases, so it produced a number of games that attempt to capture the original feeling on the much newer DSi hardware. I recently purchased a few of them, because they're ridiculously cheap (and still available, at the time I write this review, though I'm not sure how much longer that will remain the case). Since I own the real thing, I was curious to see for myself how the emulated version of Donkey Kong Jr. would perform. Now I have my answer: it performs beautifully!

When you first load up the game, you are deposited on a title screen with a tune that loops in the background. This is all-new music, and not particularly noteworthy. You can choose from Game A or Game B, and you can also select the Time option to let your top screen serve as a clock, much like the original unit would. An attract mode displays, with Donkey Kong Jr. going through the motions and potentially enticing you to play for yourself.

The Help menu notes that some controls have been changed "to better suit the DSi system," and also mourns the lack of an alarm clock. The omission of an alarm is no big deal, since I can't imagine people using the handheld for that purpose on the regular, and the control differences don't feel substantial. I'm not sure they amount to anything more than the ability to use either the A or B button to jump. Leaping for the final goal also feels slightly more user-friendly, though that could be my imagination. The timing otherwise feels exactly the same to me, or at least close enough that I couldn't tell the difference even when playing both versions back-to-back. 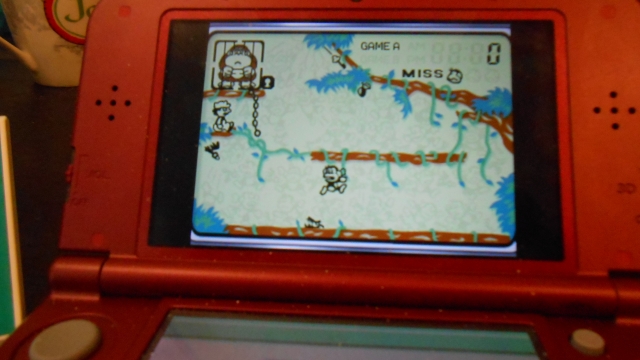 The other option on the main screen is Data Reset, in case you want to delete the high scores the game automatically records on your behalf. Which is a nice touch, I guess, but hardly something I'm likely to do. I want the world to marvel at my 261 points until the end of time.

So anyway, that leaves just the actual game to discuss. It is, as you might have gathered, quite limited. You can try to line things up so that you cause fruit to drop and it hits two traps and a bird for big points, but otherwise your only goal is to survive while you keep running through the same stage and it gets faster and more densely populated. I'm not sure why Nintendo and my mom thought a single stage would keep me occupied for long, given that Donkey Kong Jr. on the NES barely kept me enthralled for the length of a short rental, but whatever. There's just not a lot of depth here, since you can only move to a few positions on the screen while avoiding birds and traps and jumping for a swinging key near the top left side of the screen.

But it looks quite authentic, and I like that a lot. The faint image of available animations is available as a realistic backdrop, albeit one that doesn't seem to present on my actual unit's screen when I play. And the urgent ticking sound is reproduced, plus all of the beeps and buzzers sound the same. The emulation is quite solid, in other words.

Which brings us to the obvious question: should you buy it? If you played the original as a kid or if you want a reasonably faithful reproduction of that experience, you should at least be tempted. For the purposes of this review, I had to go buy some LR44-sized batteries (357 batteries from Energizer work just as well, the salesperson accurately told me) and those cost me just under $10. If memory serves, they won't power the unit for very much gameplay at all before they are entirely drained. Meanwhile, Game & Watch: Donkey Kong Jr. on the eShop costs a measly $1.99 and runs on a variety of DS and 3DS systems that come with rechargeable batteries. There's some clear value there, if you ask me. My advice to you is to get it while you still can.
4/5

If you enjoyed this Game & Watch: Donkey Kong Jr. review, you're encouraged to discuss it with the author and with other members of the site's community. If you don't already have an HonestGamers account, you can sign up for one in a snap. Thank you for reading!

© 1998-2021 HonestGamers
None of the material contained within this site may be reproduced in any conceivable fashion without permission from the author(s) of said material. This site is not sponsored or endorsed by Nintendo, Sega, Sony, Microsoft, or any other such party. Game & Watch: Donkey Kong Jr. is a registered trademark of its copyright holder. This site makes no claim to Game & Watch: Donkey Kong Jr., its characters, screenshots, artwork, music, or any intellectual property contained within. Opinions expressed on this site do not necessarily represent the opinion of site staff or sponsors. Staff and freelance reviews are typically written based on time spent with a retail review copy or review key for the game that is provided by its publisher.