If nothing else, it can be said that Bastion is a charming and engaging game. Released by Supergiant Games in 2011 and currently available on multiple platforms, it is an action-adventure that could be considered a more openly linear take on The Secret of Mana, as you control a hero capable of utilizing a wide variety of weapons as he travels through one region after another in search of mysterious MacGuffins potentially capable of setting right something that went horribly wrong.

The Calamity struck and the vast majority of the world's population has disappeared. Your youthful character, known only as The Kid, wakes up alone and sets off to reach the Bastion -- a safe haven for people to find refuge in troubled times. He'll quickly get his first melee and ranged weapons, as well as a shield, as he travels through this tutorial region. Weak enemies will serve as opposition as The Kid learns to smash everything he can in order to claim fragments (the game's currency). 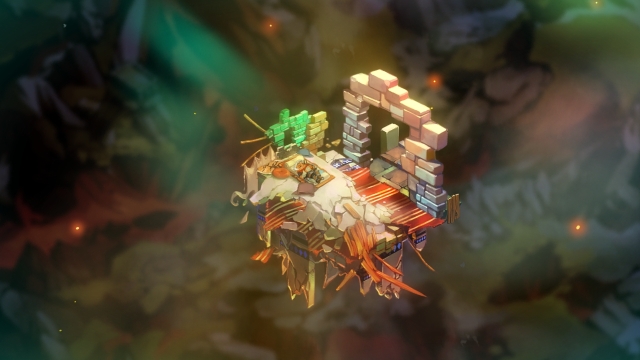 After a lengthy trip, he'll finally reach the Bastion. Only to find out there's only one other person there -- an elderly man named Rucks whom you might be familiar with, as he has been narrating the game to this point and will continue to prove dialogue throughout all your adventures. Fortunately, Rucks has an idea: collect a bunch of cores to power up the Bastion, allowing the construction of useful buildings and allowing The Kid to travel farther and farther. As he progresses, gaining new weapons and earning the opportunity to master their usage in special training grounds in order to win useful gifts, he'll meet two more survivors. Unfortunately, he'll also find objects that get to the bottom of just how the Calamity came to be, which deliver revelations that shatter the friendship built up amongst the small collection of survivors, leading to a final, frenzied race to simply salvage something.

There's a lot to like about this game. Its bright colors create a cheerful ambiance that is totally different from the dark nature of the story. It feels like you're taking part in any old fun-and-epic journey to save the kingdom, but the subtext is far darker with its themes of warfare, destruction and old enemies unable to let grudges go. You'll start levels on isolated islands, only to watch lands appear before your eyes as you walk in different directions. With your weapons, you not only can destroy enemies, but also boxes, weeds and even the walls that form around you. And you'll always have Rucks' dialogue accompanying you, whether he be talking about the current area you're visiting, admonishing you for wasting too much time destroying random bits of scenery or ribbing you for falling off a platform and suffering the resulting hit to your health.

While none of the areas you visit are particularly long, there are a good number of them, with over 15 places to visit as part of the main adventure, as well as three optional arenas where you fight off many waves of monsters while getting exposition about the origins of key characters delivered by Rucks after each confrontation. Those arenas also can be used to effectively break the game, as you can do them as many times as you wish, in comparison to the actual plot regions, which may only be visited once. This gives an infinite supply of fragments, allowing you to buy as many weapon upgrades and other goods as you desire, while also giving out extra experience towards gaining levels. 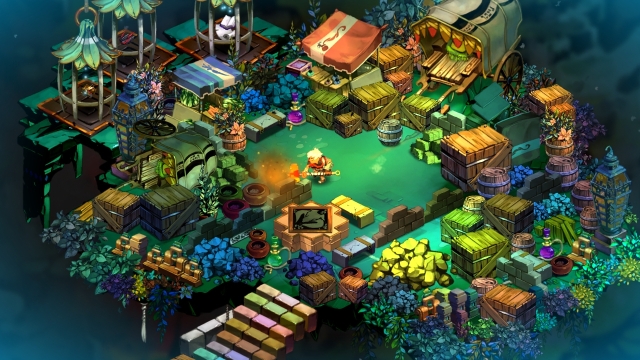 Overall, gaining experience isn't as important as you might expect from a game of this sort. By the time, I'd finished it, I was only at about level six and it often took clearing multiple stages to gain one level. However, there is a very useful benefit to getting that experience. Every time you gain a level, you'll be allowed to equip a new beverage to The Kid to give him an extra passive buff. Leechade, which I bought late in the game, was a godsend, allowing me to recoup life every time I damaged an enemy at the expense of health potions not being quite as effective. Earlier in the game, it was Werewhiskey. Under the effects of that drink, whenever my health got low, all my attacks would be critical hits. I might not be able to last much longer, but I'd be able to wipe out most of the foes in the area, so my next life would have little opposition, at least for the moment. Speaking of lives, another beverage gave me an extra one; while others let me hold more potions, both for healing and for accessing special attacks. The more I could equip, the more advantages I had.

The best advantages simply came from getting the good weapons. I'm not trying to discount the ones you get earlier in the game, especially since the Fang Repeater proved to be my favorite ranged weapon, despite being obtained in the opening stage, but some of the stuff you get later on is just awesome. Around the mid-point of Bastion, I started encountering enemies called Lunkheads -- large, armored creatures that leap into the air and land on The Kid for a good bit of damage. Making things worse, they were only vulnerable to back attacks, making killing even one an ordeal that would take all my life potions and, often, multiple lives. And then I gained the Fire Bellows and realized its jet of fire seemed capable of penetrating its armor, making those encounters far easier, as I could either dodge or simply tank an attack, engulf it in flames and finish it off before it could make a second jump. Adding Leechade to the mix made things even better, as I'd regain most (if not all) the life I'd lost from that first jump if it connected.

The neat thing is that, after finishing this game, I get the idea I could talk to any number of players and learn they found different weapons to be superior, as Bastion not only has a wide variety of them, but they tend to handle differently. The early-game War Machete is a great speed weapon, capable of dealing multiple hits in a brief time, but also has very little range and each individual hit doesn't cause that much damage. The Battering Ram, received very late in the game, is the exact opposite: it's slow and awkward as hell, but will obliterate everything it contacts quickly, including some walls that can't be destroyed by other means. 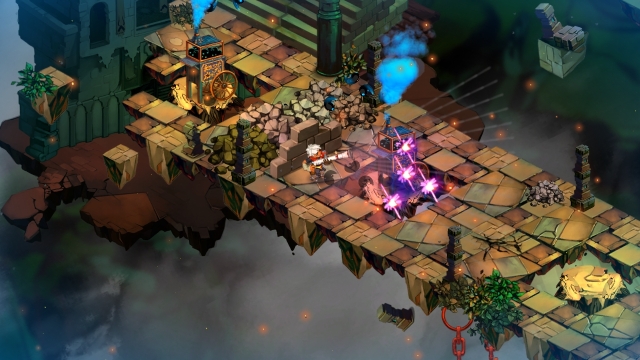 The neat diversity of weapons ties in with one of Bastion's two noteworthy flaws. You get a ton of cool stuff, but probably won't get the chance to really work with most of it because this is a short game. I purchased my version through my XBox 360's Live Arcade and it probably took a bit under 10 hours to finish it. The love I felt for the Fire Bellows never truly got satisfied, as after obtaining it, I only had five or six more stages to complete. Other weapons got picked up and used in the level they were obtained, only to be replaced as soon as I reached an arsenal. Maybe, with a bit of practice, they would have been as valuable to me as those bellows, but I simply didn't have the time and opportunity to get accustomed to them. Sure, there is a New Game Plus mode where you get access to all your weapons after the tutorial, but there's just something anti-climactic about mowing down outclassed early-game foes with a juggernaut who's already proved capable of beating the toughest foes this game possesses. And, therefore, I finished this game wishing I didn't have to wait so long to get some of those weapons, as I just didn't feel I got enough time with some of the neater ones.

That complaint might be one of those "flaws" that only exist in my own head, though. The game's excessive linearity is a bit more concrete. When I play a game of this sort, it's hard not to compare it to one like Secret of Mana or The Legend of Zelda. While you had a certain order you were expected to do things and often were led from one place to the next in those game, there was at least the illusion of an open world consisting of varied lands. You just had to get the right items from one place in order to access the next. In Bastion, nothing is truly connected to anything else. Whenever you leave the Bastion, you'll be taken to a map to pick your next destination. There is no backtracking -- once you've completed a zone, you won't be allowed back there until your next play-through. You're essentially just progressing in a straight line with very little to divert you; something that also holds true in virtually every level, as almost every side path is a dead end where you can pick up potions or extra fragments.

While this game could have been better, it was still really enjoyable. I liked the variety of weaponry and found a number of them to be fun to use. There was a decent variety of enemies and, while I wouldn't call Bastion particularly difficult, I did have to exercise a certain amount of caution in battle while also putting a fair amount of thought into what beverage buffs I wanted to have equipped. Besides, if I wanted a tougher challenge, it would be simplicity itself to visit the game's shrine and activate various idols existing solely to boost enemy strength or impose handicaps on The Kid. While I would have preferred the game to be longer or at least hand out some of the weapons earlier, I have to admit that all of the possible customization possible gives it more replay value than most titles I've recently played -- something I see me taking advantage of down the road.

If you enjoyed this Bastion review, you're encouraged to discuss it with the author and with other members of the site's community. If you don't already have an HonestGamers account, you can sign up for one in a snap. Thank you for reading!

© 1998-2021 HonestGamers
None of the material contained within this site may be reproduced in any conceivable fashion without permission from the author(s) of said material. This site is not sponsored or endorsed by Nintendo, Sega, Sony, Microsoft, or any other such party. Bastion is a registered trademark of its copyright holder. This site makes no claim to Bastion, its characters, screenshots, artwork, music, or any intellectual property contained within. Opinions expressed on this site do not necessarily represent the opinion of site staff or sponsors. Staff and freelance reviews are typically written based on time spent with a retail review copy or review key for the game that is provided by its publisher.