Once upon a time, I remember being super-excited after discovering just how many retro RPGs never made it to America back in the day. I played most that did cross the ocean, so I was thrilled to find out how many additional options awaited me. Live A Live, a 1994 release from Square, seemed like one of the most original and intriguing of the lot. Players start by advancing through seven scenarios, each featuring a different character. Then they visit a different world to work with an eighth protagonist before finishing the game in that same world, with help from an all-star team comprised of the previous heroes. Each scenario is dramatically different, despite the battle system they all share (unlike Saga Frontier on the PlayStation, where you find yourself clearing the same few dungeons with every single character, simply to acquire the best spells and equipment).

The battle system itself also differs from the norm. Players and enemies are portrayed on a grid, where they move around to set up attacks. As you gain levels, your guys pick up new battle skills that have wildly varying areas of effect. Many are only good in close-quarter melee situations, but several can strike foes along a long diagonal line or on specific squares scattered around the field. Enemies possess similar abilities, so your best character can easily get himself fried because he moved to the wrong place and landed directly in the range of a foe's most brutal attack. There are plenty of healing items and a few characters learn life-saving techs, but most of these battles find your party remaining on the offensive from beginning to end. You're fully recharged after every battle, too. The key is to pulverize foes before they do the same to you, which makes battling in this game really fun. 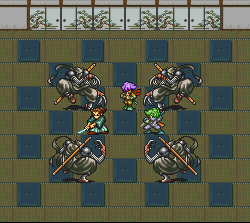 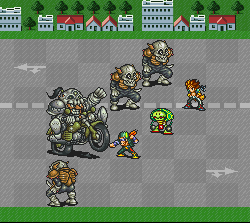 Unfortunately, "really fun" wasn't something I was thinking throughout most of my experience. A designer can create a neat premise and attach a fun battle system to it, but if the disparate elements don't come together to produce an enjoyable game, the effort is for naught. That's the problem with Live A Live: some of the scenarios fall completely flat, while others are marred because you'll need to reference a guide just to make more than a modicrum of progress.

So, let's have some fun! Read on as I briefly discuss each of the game's nine chapters, and the job they did at providing fun and entertainment, starting with the first character I selected and continuing to the bitter end.

AKIRA: This one should have been awesome. It takes place in a slightly futuristic world that wouldn't have felt out of place in an anime. The villains seek to power a giant idol with the essence of thousands of liquified humans, and you'll wind up riding a giant robot into battle to handle the final challenges. Unfortunately, the scenario sucked. There's an intricate barter system you'll need a guide to follow, plus your attempts at crafting may fail multiple times before they succeed. There's also a lot of tedious busywork going on, with a particularly egregious sequence where Akira tries to activate the robot. You have to do all sorts of things around a shop, including taking about 10 sets of stairs down to the robot's holding pen multiple times. Live A Live, we are not off to a good start

THE MASTER: This was a fairly fun homage to kung fu movies. You control an elderly master who realizes it's time to train a successor. You gather three wayward youth and teach them the arts. However, this draws the ire of a much less scrupulous master, which leads to the murder of two of your apprentices. Now, along with the survivor, you must travel to the rival's dojo and exact your revenge. The scenario starts out slow, with the training serving as a low point. It consists of a seemingly nonstop barrage of short fights where you kick the crap out of one apprentice or another. However, when it's time to storm the other dojo, things do get fun. You take out a ton of grunts before moving on the evil master's top students and finally their leader. While I wouldn't call this chapter great, it was fun and helped wash away the bad taste of Akira's tedious busywork.

POGO: It's time to go back to prehistoric days for a tale of a caveman, his ape pet/comrade and the strange girl he meets and immediately falls for. There's just one tiny problem: that girl is meant to be sacrificed to a big dinosaur by a rival tribe. Poor Pogo winds up kicked out of his clan and having to take on the other one in order to save his new beau. The chapter is pretty whimsical, since no one has learned actual speech, a point that lends itself to slapstick humor. Pogo also has a strong sense of smell, allowing you to find enemies and sometimes key items. There's even a brutally tough secret boss guarding an accessory that might come in helpful in the final chapter, if you feel like grinding a few hours to have a chance in hell of earning it. The "guess what two items combine into something useful" bartering system sadly returns here, although you at least don't have to deal with a moron shopkeeper who requires multiple attempts to actually pull off said item crafting. Two fun scenarios in a row! 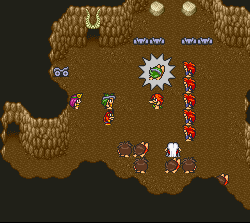 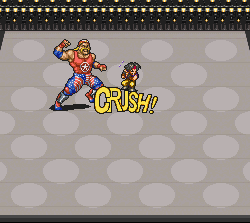 MASARU: This scenario feels like the most original. Live A Live presents Street Fighter: The RPG! You control a guy who is determined to be known as the world's strongest fighter, and so must take on six other guys in one-on-one fights. After that task is completed, the final boss appears and gloats that he straight-up murdered your vanquished opponents to prove his superiority, which leads to the final battle of the chapter. Yep, this thing consists of a total of seven fights, with barely any story between them. On the other hand, these are fun fights where a large part of the challenge is simply allowing your opponents to connect with their various skills, so Masaru can learn them in a manner akin to Final Fantasy's Blue Magic. It's filler, but it's also an entertaining diversion.

OBORO: Here is a lengthy chapter that perfectly encapsulates the overall game's pros and cons. As a ninja sent to infiltrate a compound and take out an evil guy, you can either play to kill everyone or use stealth to avoid combat, with a special reward bestowed if you kill enemies during only a tiny handful of mandatory encounters. The problem is that if you want to do anything particularly impressive, you'd better have a guide handy. Finishing without dealing more than the maximum of 100 kills requires you to take non-intuitive actions, including not fighting any of the compound's women until a specific point extremely late in the scenario. Things aren't any easier for pacifists, either. There are two brutally-powerful optional bosses, one of whom is so well-hidden, I'd be surprised if anyone could find it on their own. While this is a fun chapter, it's very complex and it's unlikely a player will come close to accomplishing anything besides simple completion without outside help.

CUBE: Take out all the fun stuff from Oboro's chapter, but maintain its confusing nature and you have this dud. Cube is a robot on board a spaceship transporting a Final Fantasy Behemoth somewhere. There is a grand total of one mandatory battle in this scenario, with the bulk of your work involving walking around, talking to people and interacting with various computers and machines. It's essentially an extended, dull puzzle that seemingly takes an eternity to complete, even if only about an hour or so actually passed.

SUNDOWN: In the Wild West, you control a gunslinger who visits a small town just before a gang of bandits decides to storm it. The bulk of the chapter consists of you running around the town, trying to find items to give the townspeople so they can set traps. If you do well at this, you'll only have to fight a tiny group of foes. If not, you'll be forced to confront the entire gang all at once. A guide could prove useful yet again. I searched all over the town, but only found sufficient materials to set a couple traps and wound up stuck in a huge battle at the end. Other than that, there's not much to say about this one other than that it's short and inoffensive. 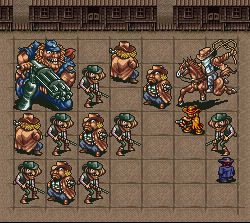 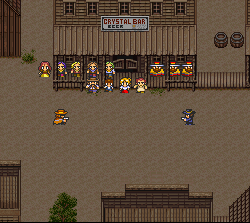 OERSTED: After completing the first seven chapters, you head to a standard medieval RPG land to embark on a standard medieval RPG quest. A brave knight seeks to rescue the princess he's betrothed to, as she has been abducted by a demon. The hero enlists the help of a wizard who serves as his friendly rival, as well as two elderly heroes with their own history of fighting demons. Everything is one big ol' generic tropewell, except for the ending, which is the greatest moment in this game. Seriously, I would only recommend Live A Live to ardent RPG fans, but the final moments of Oersted's scenario are worth digging up online.

FINAL CHAPTER: So, after clearing those first eight chapters, you pick a hero to serve as your main dude and find yourself deposited once more in the medieval world. Here, you seek out the other protagonists, go through a bunch of new dungeons to find their ultimate weapons and confront the ultimate evil. Some aspects of this chapter are fun, others are tedious and, as was true throughout much of the game, you'll probably need to consult a guide in order to find everything. A dungeon can only be reached if a specific character is in your party and you choose to escape battle? Sure. An optional boss holding awesome equipment that only can be fought if you're holding a certain item found in a different dungeon? Of course. Pray you aren't as completely fatigued with things as I was by this point, as you'll likely want to do virtually everything before tackling the extremely tough final boss.

Live A Live is neither bad nor good. It's simply an uneven game featuring some interesting and enjoyable parts that are weighed down by tedious and annoying sections. At its best, this is a legitimately fun RPG. Unfortunately, it's not often at its best. Two scenarios have horribly exasperating bartering systems, three others could politely be described as pure filler and even some of the game's shining moments are marred by unclear design that seems to have been developed as a way to keep guide writers in business. This is a very ambitious game for the 16-bit era. It just isn't particularly polished or enjoyable.

If you enjoyed this Live A Live review, you're encouraged to discuss it with the author and with other members of the site's community. If you don't already have an HonestGamers account, you can sign up for one in a snap. Thank you for reading!

© 1998-2021 HonestGamers
None of the material contained within this site may be reproduced in any conceivable fashion without permission from the author(s) of said material. This site is not sponsored or endorsed by Nintendo, Sega, Sony, Microsoft, or any other such party. Live A Live is a registered trademark of its copyright holder. This site makes no claim to Live A Live, its characters, screenshots, artwork, music, or any intellectual property contained within. Opinions expressed on this site do not necessarily represent the opinion of site staff or sponsors. Staff and freelance reviews are typically written based on time spent with a retail review copy or review key for the game that is provided by its publisher.