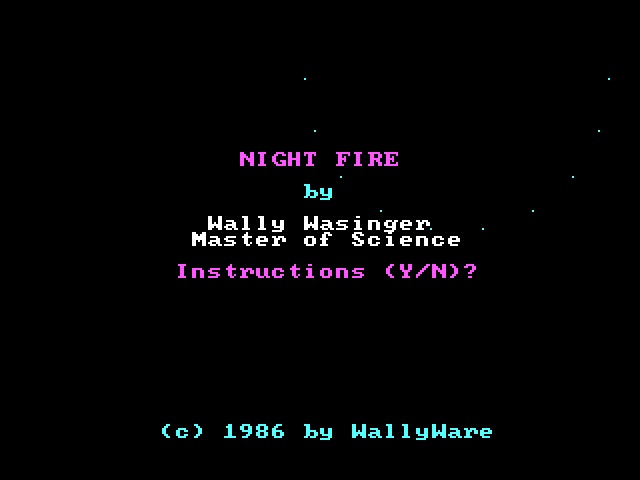 The only reason Im reviewing this game is because I needed a game that started with N for AlphaOlympics 2017. While browsing through some abandonware sites, I found this little title and just couldn't resist. Not only does it share my username, but it's also a rusty, retro PC title that I had never heard of, nor played before (and trust me, I played a lot of PC games back in the 80s). Chances are you have never heard of it either, but there are probably reasons for that.

Night Fire is an artillery game. It is probably not the first one ever made, but it damn well might be. If Scorched Earth was the Mother of All Games as its tagline implied, then Night Fire might be the doddering granddaddy of such. The year was 1986; PC gaming was still in its infancy, and dedicated hobbyists could easily cook up a game in their free time if they wanted to. Im going to guess that Night Fire was one of those games. Its title screen proudly displays the name of its sole author, a man named Wally Wasinger, along with his university credentials. One gets the feeling that this mightve been a project for one of his computer science classes.

Anyway, the rules of Night Fire are simple  destroy all enemy tanks by lobbing shells at them. You adjust the power and angle of your shots, adjusting for wind resistance and direction (as indicated by a little compass in the upper right corner of the screen), then rain death from the sky. Or, you can move your tank into a new position, which might provide better cover. Whether you choose to shoot or move, your turn will end, then the enemies take their turns. If you are the last tank standing at the end of the game, you win! Then you are treated to a little pixellated fireworks display. Thats basically all there is to it. 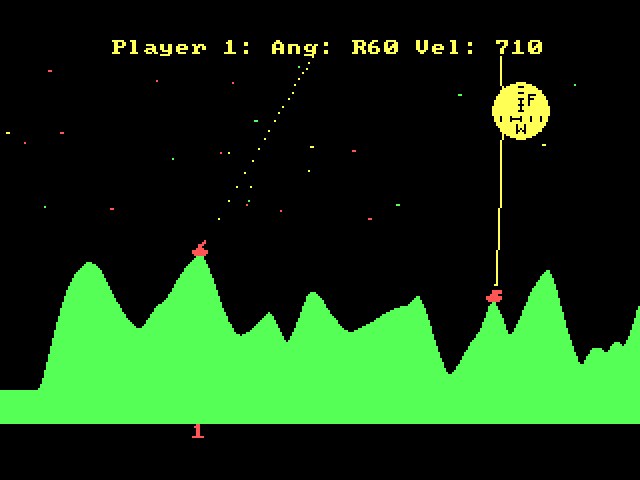 Except... Mr. Wasinger actually wrote a little story for this game. Nothing groundbreaking here, just a few paragraphs that describe how youre a doomed tank pilot and how your crappy tank can only take one shot before its destroyed. All of this is displayed in gaudy system ANSI and doubles as your instructions for the controls. Basically, you are are told that the arrow keys adjust the speed and angle of your shots, while the spacebar is used to shoot. This, for some reason, required two pages of notes and exposition.

In all honesty, there's nothing wrong with what Night Fire does, it's just that it does so little. Once you've killed a few tanks and seen those fireworks a few times, you've seen all the game has to offer. The game also has absolutely no AI to speak of. Up to 8 players can supposedly play, but they would all have to take their turns on the same keyboard (there is no joystick support). I cannot imagine that this would be a lot of fun, but with the right friends and enough alcohol, perhaps anything is possible.

Sigh. Im gonna go out on a limb and say that Night Fire is not the best game. Im trying to keep things in context here. I get feeling that Mr. Wasinger was proud of his project, and perhaps he should've been. Coding a game from scratch was a lot more difficult back in those days than it is now, and doing it all by yourself was certainly an achievement. However, Night Fire was also released in the same year as hard-hitting releases such as Ultima IV: Quest of the Avatar, Kings Quest III, and Starflight. Then, on the console side of things, immortal classics such as Super Mario Bros. and Metroid had just made their way onto the market. A little pet project like Night Fire could not possibly hope to compete with those releases, even as freeware.

I will say that its cool Night Fire has been preserved through the ages, likely being passed around on floppy discs and BBS systems before eventually making its way onto the internet. It is still available for download today and is an interesting little piece of gaming history. However, there is absolutely no reason to play it over Scorched Earth, Worms, or any of the other, better artillery games out there.

If you enjoyed this Night Fire review, you're encouraged to discuss it with the author and with other members of the site's community. If you don't already have an HonestGamers account, you can sign up for one in a snap. Thank you for reading!

© 1998 - 2022 HonestGamers
None of the material contained within this site may be reproduced in any conceivable fashion without permission from the author(s) of said material. This site is not sponsored or endorsed by Nintendo, Sega, Sony, Microsoft, or any other such party. Night Fire is a registered trademark of its copyright holder. This site makes no claim to Night Fire, its characters, screenshots, artwork, music, or any intellectual property contained within. Opinions expressed on this site do not necessarily represent the opinion of site staff or sponsors. Staff and freelance reviews are typically written based on time spent with a retail review copy or review key for the game that is provided by its publisher.