Saying that Titan's Tower is the best RCMADIAX game I've yet played is easy enough, because it's absolutely true, but that faint praise doesn't amount to much. It's a bit like saying Brunhilda is the least awful of the wicked stepsisters some poor nobleman once must have gotten stuck dating instead of Cinderella.

Released on Wii U in late 2016, Titan's Tower automatically trumps the developer's other output because it actually features more than a single sound effect, because the graphics are reasonably detailed and complement the gameplay, because the controls are quite tight in general, because the concept hasn't been done to death (comparatively speaking) and because I didn't come away feeling like I was just fleeced. Of course, part of my not-quite-satisfaction comes from the knowledge that I got the game on sale. I spent only $0.99 instead of the usual $1.49. If you were looking for a bargain hunter, you just found him!

In Titan's Tower, you play a little character (a titan, maybe?) who lives in a mostly black world. The walls that rise to either side are completely black. Balconies extend from them, periodically, as do spikes (for some reason) and bits of foliage. Occasionally, there are large gashes in the walls, as if someone took a bite out of them. In the backdrop, you see the faint outline of other towers, with a dark blue sky that gives the impression of night sky. Oh, and there are ambient noises. Yes, in an RCMADIAX game. Birds are chirping, like on one of those relaxing sounds CDs you might find playing at an in-store display, next to the greeting cards. 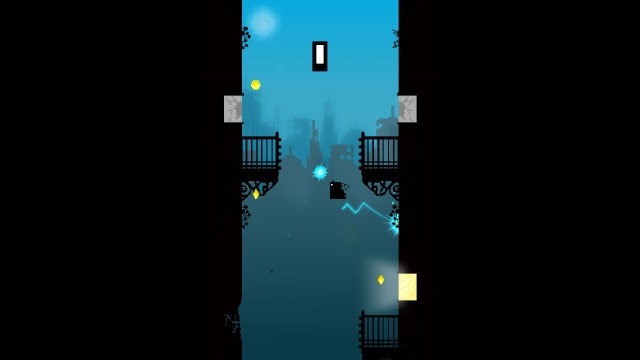 So your job in the game is to run up the two walls, alternating between them as you steadily ascend. If you fall into one of the recesses, that ends your run. If you leap against the side of a balcony, that often also ends your run... but not if you first catch hold of a ladder that might be dangling from one. Then you can just keep going, unless you jumped at it from the wrong side. Also, you need to avoid the aforementioned spikes, and your ultimate goal while you do all of this is to snag as many coins as possible. A single coin improves your score by five, while a glowing one nets you a cool 5 points.

Jumping back and forth is risky, because you can only see so far ahead of--err, above--your character's current position. It's not really possible to do much planning, so you have to rely on twitch reactions and best practices. These tend to come most naturally with practice, as you get used to the various hazards and start to understand what traps to watch for as you ascend. There's never really enough time to think, so in a sense Titan's Tower represents gaming in its purest form while serving as a reminder to someone like me that my reflexes probably aren't quite what they used to be.

Fortunately, mysterious blue orbs hang in the air. When you pass over one of these, you get jolted by lightning and can briefly ignore dangerous hazards or crash through balconies. The effect doesn't last long, but it's glorious while it does. 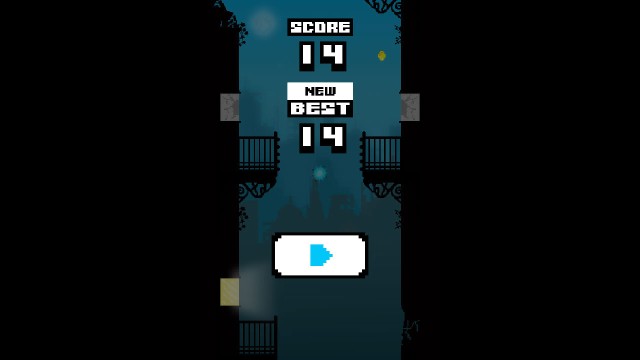 Less glorious are those uncommon but still unacceptable moments when you can't possibly proceed because the random placement of the various hazards threw an impossible obstacle your way. If you're running up a wall and there's a balcony you can't scale to your right and an indentation in the wall to the left and no blue orb hanging between them, well... thus ends your run. You can't do anything about it, which is regrettable in an action game that one might reasonably call a "score chaser."

Score quickly becomes the best reason to keep playing, of course, because first you want to see if you can get past 10, then 20 and so forth. My first few runs were really quite bad, and it was my misfortune to have my wife watching as I tried to develop a feel for it all. She began laughing so hard she could hardly compose herself, because it does look a little bit comical when you're the person watching someone else struggle to come to terms with everything all at once. Of course, she had no interest in trying for herself... probably because she remembered how hard she had laughed at me and was leery that I would have responded in kind (and maybe I would have). 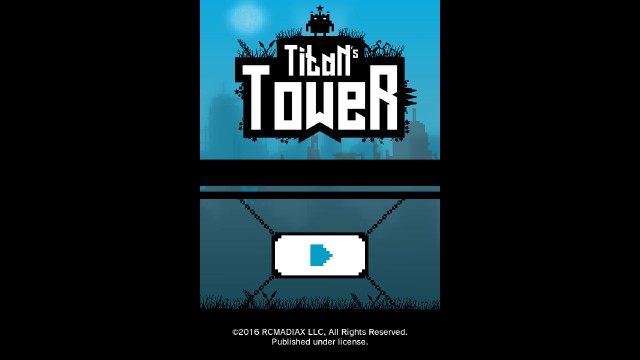 The game really could have stood to do some things better. You can't start a new run without tapping an icon located on a specific part of the gamepad screen, but the rest of it is played by pressing the A button to jump whenever you wish (tapping doesn't work). This means that although you can play on the television, you have to accommodate the game's design in order to enjoy yourself, since you will probably die a lot and have to keep tapping that icon to try again. Also, the game doesn't save your top performance when you exit out of it, and there are no leaderboards of any sort. I expected that to be the case, having played other titles from the developer, but it still seems like an oversight in a game where your score is basically the entire point.

By now, I've learned that I probably shouldn't expect much from RCMADIAX. There's a reason the developer's games are so affordable, after all. But just because you can often purchase them for less than a couple of bucks doesn't mean that you actually should. Titan's Tower occupies a gray area, where it's not quite a good game, but might still offer enough potential for enjoyment to justify its price tag. You know, for those times when you're feeling noble and Cinderella is otherwise occupied.

If you enjoyed this Titan's Tower review, you're encouraged to discuss it with the author and with other members of the site's community. If you don't already have an HonestGamers account, you can sign up for one in a snap. Thank you for reading!

© 1998-2021 HonestGamers
None of the material contained within this site may be reproduced in any conceivable fashion without permission from the author(s) of said material. This site is not sponsored or endorsed by Nintendo, Sega, Sony, Microsoft, or any other such party. Titan's Tower is a registered trademark of its copyright holder. This site makes no claim to Titan's Tower, its characters, screenshots, artwork, music, or any intellectual property contained within. Opinions expressed on this site do not necessarily represent the opinion of site staff or sponsors. Staff and freelance reviews are typically written based on time spent with a retail review copy or review key for the game that is provided by its publisher.