The "hell" part is obvious for the town of Etria. Having a massive labyrinth loaded with all manner of hostile creatures situated right outside the city limits can't be ideal. But enterprising people rule the town and have turned the deadly nature of the surroundings into a tourist attraction. Explorers, would-be heroes and others come from afar to try their skills at mapping out the maze and clearing out the monsters that make it so hellish. Items dropped by fallen foes or snagged from collection points are sold to the local store and converted into weapons and items. People looking for a special possession, but unwilling to put their lives on the line to acquire it, can submit requests for more courageous souls to undertake. No, for Etria, the maze might be salvation -- at least for its economy. 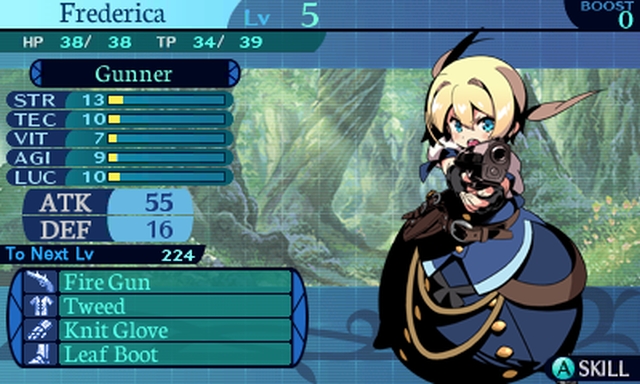 Such is life in the 3DS' Etrian Odyssey Untold: Millennium Girl, a remake of the DS' Etrian Odyssey. Created by Atlus, so gamers know they're getting a tough challenge, this is essentially a refurbished version of the original game with some new content addedif players want it. At the beginning of the game, you get the choice of Classic or Story mode. Classic mode is, more or less, a pure remake. You devise a five-man party out of a large number of character classes and start exploring the maze in an attempt to reach its bottom. Story mode, which I chose, gives you a character of a specific class who quickly meets four other characters (also with their own classes) after learning the ropes from a pair of veteran explorers. To make up for not having the option to customize your party from scratch, an additional multi-part dungeon, Gladsheim, can be accessed every time you complete a handful of floors as part of a sub-plot involving one sidekick's amnesia.

So, "explore a big dungeon" combined with a generic "get to the bottom of someone's amnesia" questperhaps true hell comes from the minds of unimaginative writers. Fortunately, this game is a throwback to classic computer RPGs like Wizardry. It's hard to care about one lackluster plot element or another when you have over 30 levels loaded with secrets to map. And, even better, no need to run down to the store to snag a pad of graph paper, a pack of pencils and a couple extra erasers for when you've worn those on the pencils down to nothing. The top screen of the 3DS has the first-person-view maze and its never-ending stream of monster encounters, the lower takes full advantage of its touchscreen capabilities to be your map. Use the stylus to draw walls and drag icons over to represent points of interest, whether they be mundane things such as scripted encounters or health-damaging floors, fiendish tricks like one-way passageways and teleportation devices all-too-willing to whisk you halfway across a floor to parts unknownor truly dangerous things such as FOEs.

If you're going to make a game in a genre that's been around for a good 30 years, you need to have your own hook and that's where the FOEs come into play. While most non-boss battles are randomly encountered, these guys are all-too-visible as icons on the bottom screen and in living color on the top. You can call them "tougher-than-usual" monsters or "mini-bosses", but all you need to know is that they are notably more difficult than anything you'd normally encounter on whatever floor you're currently exploring. They'll be your hell, but their visibility can be your salvation, as you'll be able to watch their movements and devise your strategy for confronting or avoiding them.

And in the early going, avoiding them is the only sane solution. A low-level character simply doesn't bring much to the table. They'll be lacking in health and magic and without enough purchasing power to load up with sufficient items to withstand any truly prolonged assault. Whenever someone gains a level, they get a point to either make skills more powerful (unlocking new ones in the process) or improving attributes such as health or attack power. When you reach the second level of the maze, you'll have gained a handful of levels, giving you a scant few skills and improvements. When you reach the second level, the FOEs make their first appearances. When I reached the second level, I had my first encounter with the "Game Over" screen. 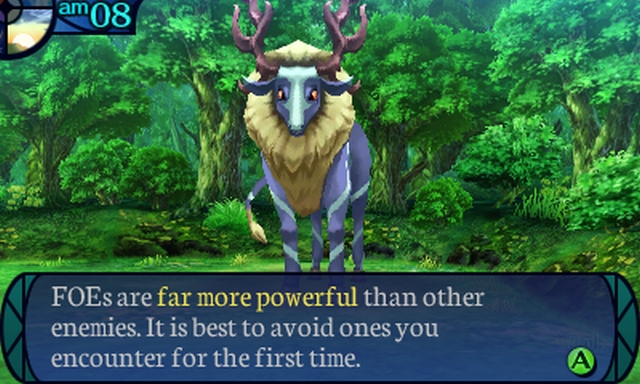 Let's start with the Ragelopes. By FOE standards, they're weak. By the standards of anything you've fought previously, including the boss of the introductory section of Gladsheim, they're brutally powerful. Your saving grace? They're not particularly aggressive, preferring to simply walk back-and-forth along a set path. If you don't want to fight them, simply wait for them to pass and scamper by them. Of course, since this is a turn-based game, FOEs move on the map when you do, so you'll have to gauge your actions so you don't inadvertently blunder into one of them, but like I said, this is an Atlus game. Nothing comes easy.

That's something that will be POUNDED into your head when you've made it from the western half of the second level into the eastern. Throughout this floor, you've likely seen a number of large rocks serving as obstacles for you to get around. Turns out that some of them weren't actually rocks, but slumbering Boulder Boars! Get in front of them and they'll immediately wake up. At this point, you have two options: get out of their path or watch them explode into motion, covering their entire travel path in one turn. If you're in that path, you're in for a battle with a powerful and durable foe that happens to be quite resistant to physical attacks. The Story mode party has one pure mage and one gun-wielding character who can access elemental attacks to go with three people whose attacks are purely physical in nature. Let it suffice to say that it will be some time after you first visit this floor that you'll feel remotely comfortable engaging in confrontations with these beasts.

As you progress, you'll find that FOEs have all sorts of tricks up their sleeves. While you're stuck in random battles, they can still move. When I reached the third five-level stratum of floors, I noticed these large crabs submerged in water. No matter how many times I paced directly in front of where they rested, they ignored me, making me think they were merely background decoration. And then I triggered a random battle and noticed, to my immediate panic, this caused them to wake up and home in on my location. If I killed the small fries accosting me quickly enough, the FOE would retreat to its underwater abode. If not, it'd casually enter the fray and give me something a lot more deadly to worry about than what I'd been assaulting.

Those dirty tricks aside, after I'd gotten through a few floors and built up my party a bit, I didn't find individual FOEs to be overly imposing. I might have retreated back to town after fighting two or three of them, simply to rest at the inn and regain my magic, but I didn't enter into confrontations with them wondering if I had it in me to simply survive -- they were just tougher fights that gave better rewards. Instead, it was the boss fights that posed the harshest challenges, in part because they tended to use those FOEs as bodyguards and cannon fodder. Challenge Fenrir, the boss of the fifth floor, and a collection of the area's wolf FOEs will suddenly advance upon you, ready to defend their leader. Watch your party get overwhelmed by sheer numbers. Realize that you'll need to devise far better strategies. Then play through 15 more floors and confront a massive boss living in an even more massive chamber that's cluttered with somewhere between 15 and 20 FOEs, many of which will be triggered to attack if you enter the main adversary's line of sight. Gradually whittle down the FOEs and attack the boss when he's out of helpers? Good idea, but if he sees you, those guys will be respawned and you'll be back to square one with no salvation in sight. 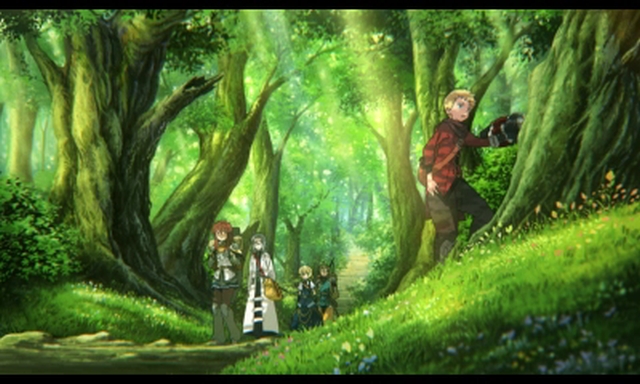 The longer you play The Millennium Girl, the more potential pitfalls you'll unearth. By selling items to the store, you'll get access to superior healing items. But if you don't keep selling the specific items that go into crafting those items, the store will quickly run out, leaving you on late-game floors with devastatingly powerful foes and unable to replenish magic or bring your healer back to life. Or there's the minor tidbit that a late-game optional boss happens to be located right in the middle of the eighth level, serving as a very lethal obstacle. While it won't move, it will breath fire whenever you get in its line of sight, making getting around it to reach the stairs to the next floor quite the ordeal, especially since fighting it is out of the question when you first make its acquaintance.

But that's the nature of the maze. A hellish landscape strewn with powerful monsters you must farm for meager rewards in order to scratch together the dough to keep your party equipped with at least some of the newest stuff. Don't' get me wrong; you'll never truly be optimally equipped because as soon as you're able to buy a few nice things at the store, you'll sell some enemy drops and find out they allowed the shopkeeper to craft something nicer and more expensive, leading you back out to earn more and more money. A seemingly never-ending cycle that won't come to a close until you've beaten the game, accessed the final levels of the maze and overcame the true final boss.

I could complain a bit about this game, since I do wish I could have chosen the classes for the Story mode characters. It seems a bit weak to make players choose between accessing all the content or having full control over what party they create. To help players diversify their party, there also is a Grimoire system where you combine stones to get skills that I didn't remotely get into or even understand. But I can't complain too much. My house has a few pads of graph paper from one attempt or another to get through one maze-filled RPG or another, but I didn't have to dig one of them up to painstakingly etch out clumsy maps since this game gave me all the tools I needed. I initially looked at the 3DS' touchscreen to be a lame gimmick, but when it's applied in this manner, it's practically a godsend. The maze may be hell, but this game is salvation -- an excellent modern rendition of those Wizardry or Gold Box games I was immersed in throughout much of my youth.

If you enjoyed this Etrian Odyssey Untold: The Millenium Girl review, you're encouraged to discuss it with the author and with other members of the site's community. If you don't already have an HonestGamers account, you can sign up for one in a snap. Thank you for reading!

© 1998-2021 HonestGamers
None of the material contained within this site may be reproduced in any conceivable fashion without permission from the author(s) of said material. This site is not sponsored or endorsed by Nintendo, Sega, Sony, Microsoft, or any other such party. Etrian Odyssey Untold: The Millenium Girl is a registered trademark of its copyright holder. This site makes no claim to Etrian Odyssey Untold: The Millenium Girl, its characters, screenshots, artwork, music, or any intellectual property contained within. Opinions expressed on this site do not necessarily represent the opinion of site staff or sponsors. Staff and freelance reviews are typically written based on time spent with a retail review copy or review key for the game that is provided by its publisher.