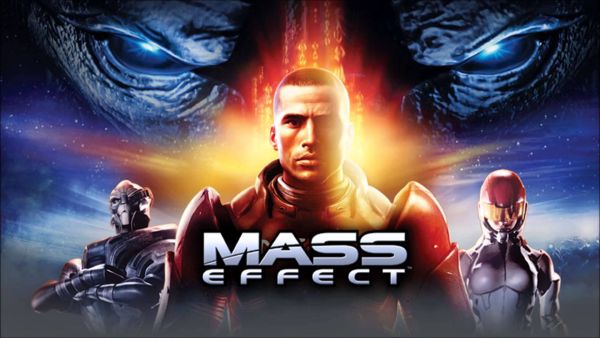 There are two sides to the Mass Effect experience. You will remember one of them, and probably cherish those memories for years to come. The other piece will slip into the black, vacant part of your mind where unimportant information goes to die. The former is loaded with action and spins a satisfying sci-fi yarn. The latter has a greater potential to occupy most of your play time, but is more chore-like and repetitive.

You'll recall creating Commander Shepard, fleshing out both a character model and a history. Each option helps you to form a clear image of the kind of protagonist you desire. In my own playthrough, I created a Shepard who survived a massive battle that left him scarred. Not that the guy was much of a looker in the first place. I sought to make a male Shepard who wasn't particularly attractive, and thus crafted a rough, ugly SOB. But this man had a heart of gold, perhaps even to a fault. He followed all of the rules and made decisions like your standard goody two-shoes. Truth be told, even I cringed at some of the choices I made just to keep the guy in character.

Honestly, that's one thing I dig about Mass Effect. Its dialogue sequences allow you to select from a variety of responses. Some of them are the typical "good guy" lines, while others are more sinister or harsh. For instance, the game features a reporter who interviews you late in the campaign. You can either take the high road and make her look like a lunatic, or flat out deck her. Mass Effect also offers special replies that appear if you possess a healthy enough charm or intimidate talent. High charm could be the difference between, say, peacefully resolving a hostage situation or needing to execute the assailant. 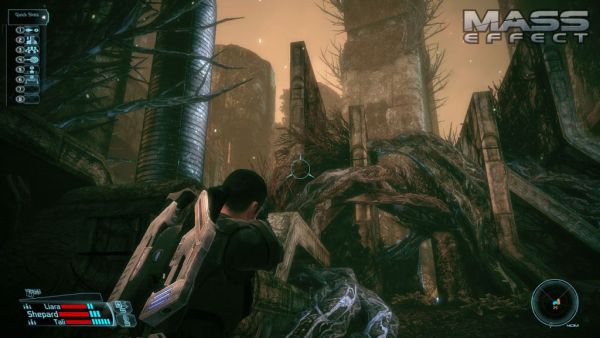 Chitchat plays an integral role in Mass Effect. Although you might sigh at the prospect gabbing with every soul you meet, you stand only to gain by sitting through each piece of dialogue. Speaking with your crew allows you to establish rapport with them, and even woo certain party members. A female Shepard, for instance, might sweep the extraterrestrial Liara off her feet or melt Kaiden's human heart. Also, your ceaseless blather with the Citadel's locals nets you access to side quests, which often require further chatter to complete. Side quests also lead you to...

Full of mountains as far as the eye can see.

Outside of the Citadel lie numerous star systems. Each system provides you with several planets, moons, asteroids and/or space stations to scan, but typically one location to visit. Your vessel, the Normandy, drops you off in a high tech, combat ready buggy called the Mako. From there, you either head towards points of interest on your map or roam around the world until you grow tired of seeing the same environment for miles.

Unfortunately, planetary exploration loses its appeal after about your fifth landing. All of the planets bear the same type of environs, so they pretty much run together. On top of that, the Mako is a pain in the ass to drive because it can't make up its mind if it wants to handle like a Warthog from Halo or utilize more standard controls (Up moves upward, Left drives left, etc.). On top of that, many locales require you to drive over tremendous hills. In order to accomplish that, you need to approach each slope at varying angles until you find one that doesn't involve you sliding backwards. For some of the map's points of interest, that might require several minutes of zooming up an incline, reversing, coming at it from a different direction entirely, and so on for several minutes at a time. Even then, you might ascend 80% of the mountain only to stop dead and slowly reverse. 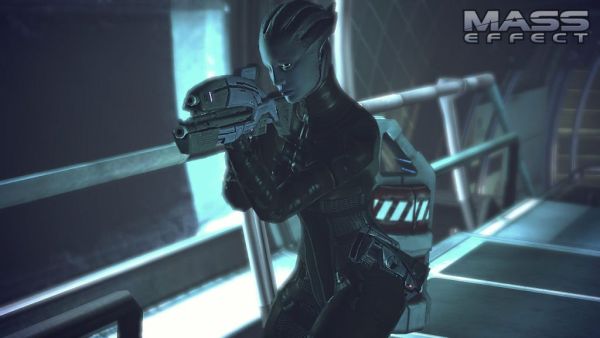 And why do you endure all of this nonsense? So you can scan a downed probe and receive a handful of ordinary items. Or so you can survey a mineral deposit and gain a tiny shred of experience. Or so you can stumble upon one of Mass Effect's side "dungeons," of which there are about three variant designs.

Logging hours into exploration isn't necessary, but it helps graciously. In my playthrough, I attempted every side quest I could before moving on to the main quest line. I invested over nearly thirty hours into this venture alone. By the time I finished incessantly collecting, defusing hostile situations and blowing up as many Geth--evil AI droids who serve as one of the story's main threats--strongholds as I could, my level was mid-thirties. Needless to say, I had my character's build pretty well figured out and powered up before tackling the canon missions. My Shepard could snipe like no other and take out heavy armored opponents with his handgun, while Ashley and Garrus provided either shotgun or assault rifle support. Now and then I might throw out a resurrection "spell" or overload the opposition's shields, making them easier prey.

As you may have gathered from the previous paragraph, Mass Effect strikes a wonderful balance between third-person shooter mechanics and RPG rule systems. You perform familiar commands from the former, including lobbing grenades, taking cover and standard aiming. However, the game takes your statistics into account when you fire and not just your shooter skills. Superior guns, leveling up and weapon upgrades provide not only increased damage, but improved accuracy and swifter cooling times. In place of action points or turns, Mass Effect limits your actions via weapon heating. With each squeeze of the trigger, your arms grow hotter and eventually become unusable after so many blasts. 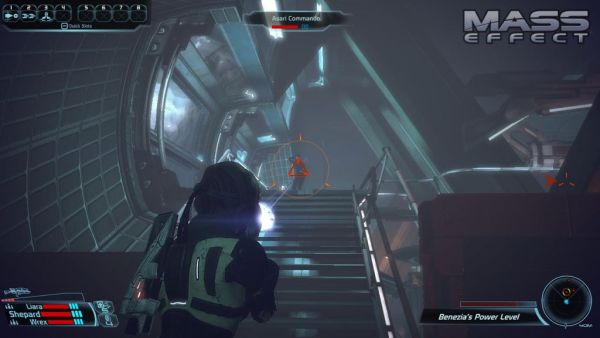 It's odd when I think back on Mass Effect's innumerable battles, because I can't recall any that stood out. Yeah, I remember traveling to one planet to rescue embattled workers from a Geth invasion, or stomping out creatures called Rachni in a research facility, or puzzling my way through dingy old ruins crawling with foes. But I couldn't tell you many hair-raising situations or specific moments where battle was particularly furious. Honestly, although I had fun shooting and watching Shepard mature from your average soldier to a seasoned gunslinger, I can't piece together a single defining fight.

If you put all of Mass Effect's ups and downs on a scale, the former outweighs the latter. Yeah, those negatives are a bummer, but even when you're traversing desolate landscapes or engaged in forgettable fights or cussing at the Mako's confusing play control, the experience is thrilling and still far more entertaining than your average RPG. Toss in Mass Effect's awesome dialogue choices, and it's not hard to see why this franchise remains alive today.

If you enjoyed this Mass Effect review, you're encouraged to discuss it with the author and with other members of the site's community. If you don't already have an HonestGamers account, you can sign up for one in a snap. Thank you for reading!

© 1998-2021 HonestGamers
None of the material contained within this site may be reproduced in any conceivable fashion without permission from the author(s) of said material. This site is not sponsored or endorsed by Nintendo, Sega, Sony, Microsoft, or any other such party. Mass Effect is a registered trademark of its copyright holder. This site makes no claim to Mass Effect, its characters, screenshots, artwork, music, or any intellectual property contained within. Opinions expressed on this site do not necessarily represent the opinion of site staff or sponsors. Staff and freelance reviews are typically written based on time spent with a retail review copy or review key for the game that is provided by its publisher.