TumbleSeed, a brand new game from an indie studio known as aeiowu, has numerous pleasing qualities: colorful and effective visuals, a kooky soundtrack, a unique premise, and enough charm to power several other games.

I don't like playing TumbleSeed, though. One might even say I hate playing it, for reasons that may not bother you in the slightest.

In TumbleSeed, you assume the role of a small little seed that lives in a village populated by older, wiser seeds. An ancient prophecy foretells brave deeds on your part, because you possess the unusual ability to plant yourself in patches of soil on a nearby mountainside. If you die, you can always just plant yourself and try again from that mountain's base, as often as you might like. You're a pretty useful hero, in that one respect. Alas, you don't have much else going for you. 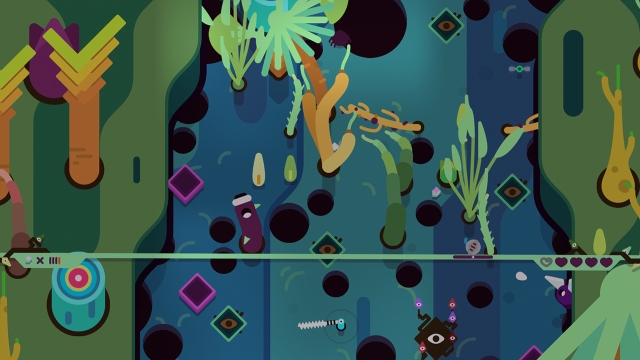 Remember how a moment ago I said the game has a unique premise? I wasn't just talking about the idea of playing as a seed, which is fresh all on its own. The controls are unusual, as well. Rather than moving the seed directly, you manipulate a green bar. It stretches the width of the screen, and the analog sticks allow you to raise or lower its left and right ends. When you catch up to the seed, it rests on the bar and then rolls left or right, depending on elevation and slope.

Using that unconventional control scheme, you must precisely move your seed through areas filled with hazards. These include large and small holes, as well as roaming slugs, birds, over-sized spiders and so forth. A lot of those nuisances move fairly quickly in specific patterns. Others rush you when they see you. And there are some other threats, like spike traps and glowing cores that emerge unexpectedly from the aforementioned holes and fire waves of energy. 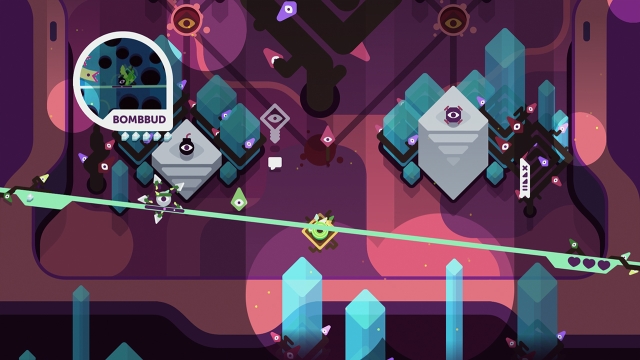 Initially, you're defenseless against such threats. However, that condition changes if you survive long enough and play your cards right. As you roll through the stage, you can press the action button to equip a different one of your available forms. Then, when you roll over a patch of dirt, you can enhance the equipped form a bit. Early on, for instance, you might choose to develop a thorn for each patch of soil you cross. A thorn takes out a slug or worm... if you approach it at the right time, when the constantly rotating thorn is in the proper position. Otherwise, you just take damage you can't afford.

I took a lot of damage as I played TumbleSeed, because it's a monumental pain the butt to develop the multiple thorns you need in order to stand a better shot at survival. Not only do you need to cross over patches of soil to produce your thorns, but you also must maintain a supply of white crystals. For each thorn you grow, you need a corresponding crystal. You can find some of them lying about, near treacherous pits, but others are obtained only by rolling over several patches of soil while in your crystal form. Every third patch of soil that you cross produces an extra two crystals. 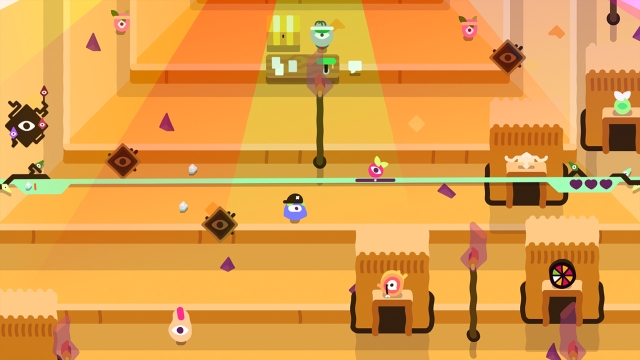 At the start of this review, I gave you a list of the things TumbleSeed does right. Now, here are a few things I feel it does wrong: the controls are sometimes far too touchy, the stages have too many hazards that often require prompt responses you can't always manage in a hurry (thanks to those fickle controls), and the randomly-generated areas frequently produce scenarios only the most skillful players can possibly hope to consistently negotiate. And if you're a skillful player who likes a challenge, that's where our specific tastes are most likely to diverge. You might even love the game for the reasons I couldn't enjoy it.

TumbleSeed is a "roguelike," which in this case means that when you die, you are sent back to the first proper area. Although you can progress slowly up the mountain, planting flags that function as checkpoints, you're still dead if you lose (initially) three hearts. Sometimes, you bump into a slug or something. It sends you flying, and you either have to wait for the seed to slowly drift back down, or you can move the bar up into place. Then, the seed might fall into a hole just as you reconnect with it. Or it might become lost behind part of the scenery and vanish from sight, soon falling into a pit you couldn't even see. Or a glowing core might materialize and blast it. A lot of times, everything happens in a rush that seems to unfold in a few short seconds. I've had runs that last a couple of minutes. I've had more runs that lasted a quarter that long. 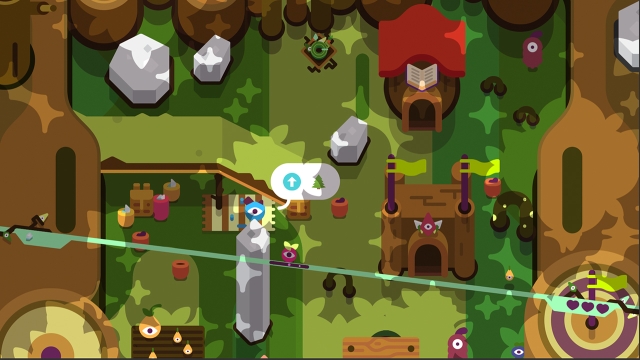 Simply put, TumbleSeed is too demanding for its own good. There's a neat system that adds some depth by allowing you to purchase additional upgrades (such as missiles you can fire and traps for the spiders), but even getting to the caves where they are located takes a lot of effort and can't be done reliably. You don't get to keep your acquired gear when you die, either. You don't keep anything, as far as I could tell, except a tally of how many dozens of times you've died without having anything to show for it.

Kids will likely be drawn to TumbleSeed at first, thanks to its attractive visual design. Adults might find that sort of thing appealing, as well. To me, though, the game feels like a missed opportunity. It's charming, fun to look at and interesting, sure. But in my view, its controls are too touchy, its hazards are too numerous and any sense of progression is ruined by the strictly implemented roguelike elements. The developers got nearly everything right except for the stuff that's most important to me. I wish the team members at aeiowu the very best. I'm legitimately excited to see what they produce next, because it's clear they have talent and the potential to someday do great things. Unfortunately, I can't say this particular game worked for me...

If you enjoyed this TumbleSeed review, you're encouraged to discuss it with the author and with other members of the site's community. If you don't already have an HonestGamers account, you can sign up for one in a snap. Thank you for reading!

© 1998-2021 HonestGamers
None of the material contained within this site may be reproduced in any conceivable fashion without permission from the author(s) of said material. This site is not sponsored or endorsed by Nintendo, Sega, Sony, Microsoft, or any other such party. TumbleSeed is a registered trademark of its copyright holder. This site makes no claim to TumbleSeed, its characters, screenshots, artwork, music, or any intellectual property contained within. Opinions expressed on this site do not necessarily represent the opinion of site staff or sponsors. Staff and freelance reviews are typically written based on time spent with a retail review copy or review key for the game that is provided by its publisher.