A secure tower must be infiltrated, so that powerful technology can be stolen before corrupt individuals put it to horrific use. You, a fellow with the useful ability to shift through walls like Nightcrawler (the X-Men character, not the Jake Gyllenhaal one), are the only person potentially capable of pulling off the daring heist. Such is the premise of Mr. Shifty, one of the most recent additions to the Nintendo Switch's rapidly growing library of digital titles. It sounds pretty cool on paper, but the execution doesn't always live up to the idea.

Presented from a top-down perspective that looks like something out of Hotline Miami (or its rather disappointing clone, L.A. Cops), the action in Mr. Shifty is at times extremely intense. That's mostly due to your weak offensive capabilities, unfortunately. You might be able to warp through a wall like it's made of air, but your fists are considerably less useful and they also happen to be your primary weapon. You utilize them against a seemingly endless stream of goons who pack heat and know to expect you. If a single bullet grazes you, or a thug hits you with his ham-sized fists, you die. Also, there are pesky lasers and explosives, which have the unsurprising tendency to leave you similarly dead. 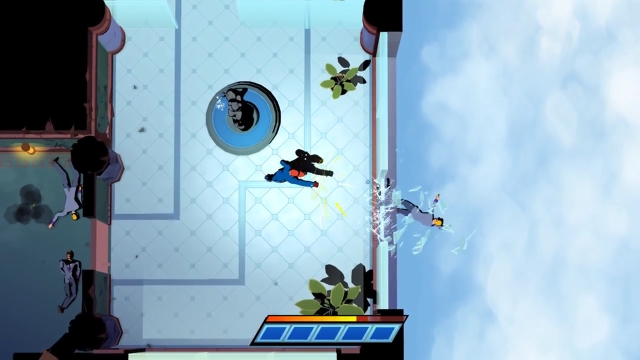 Your short life expectancy in the event of a frontal assault means you're going to have to shift through walls and along corridors quite regularly. However, you can only shift up to five times in rapid succession before you must stand to face the music. This means you need to use your noggin, not just mash a button that on the face of things makes you invincible. For example, you might rap on a wall and prompt several goons to investigate. Then you can beat them to a pulp, one at a time. Or you might zig-zag along a corridor with adjoining chambers, passing through walls and delivering a beatdown from an unsuspecting gunman's back side. You could even pick up a handy weapon, such as a broom or an oar (why there are oars in this office setting is anyone's guess), just so long as it's not one of the many guns your foes drop when send them to the great beyond. For some reason, Shifty isn't interested in shooting anyone.

I'm not sure what the hero's aversion to guns is, not when swarms of guards are all too happy to use them. It's not like stealth is a serious consideration. All too often, you're pointed toward a mostly open area, with gunmen positioned all around it, weapons pointed at the door they expect you to enter. So you warp through it, then warp quickly again and maybe again. Now you're standing behind one of them as everyone else pivots to your location, and you have time only to deliver a quick punch or two before it's prudent to warp again. Fortunately, your meter refills quickly. That makes the hectic combat slightly easier. But you're just one man, going up against a whole army of goons, and they also might keep pouring in from side passages while alarms sound. You can't stand still for long and deliver a satisfying flurry of hits because then someone will just shoot you from the sidelines. No one in the tower has a sense of fair play. 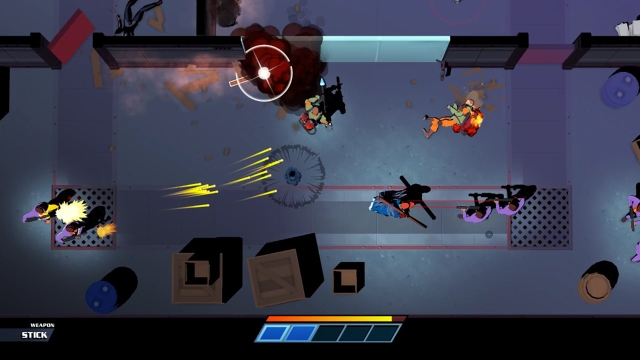 I really wish there were more ways to play through some of the areas. Early on, it's easy to warp through walls, or to create distractions. I enjoyed those moments quite a bit. But as the campaign progresses, the initial hour or so becomes a distant memory and you're expected to accomplish more with your time spent between checkpoints. There's less room for creativity and error, as well, which is disappointing for a few reasons. There's nothing quite like reaching a corridor where you take out something like 50 goons without a break, make it almost to safety and then have to start over again from the beginning due to a silly mistake, or because the game froze for a split second and your button press didn't register. Some players might enjoy such gauntlets, but I would prefer a more methodical approach.

Something else I like is a campaign that knows when to end, which Mr. Shifty doesn't possess. The game feels fairly fresh and interesting for its first half or so, but from there it keeps going without doing a lot to justify the longevity. New mechanics are introduced along the way, and you'll need to solve a few interesting puzzles and work around various limitations in order to get past some robust security systems. None of that distracts you from the fact that otherwise you're completing the same few chores on a loop, all as the resistance grows increasingly cheap. 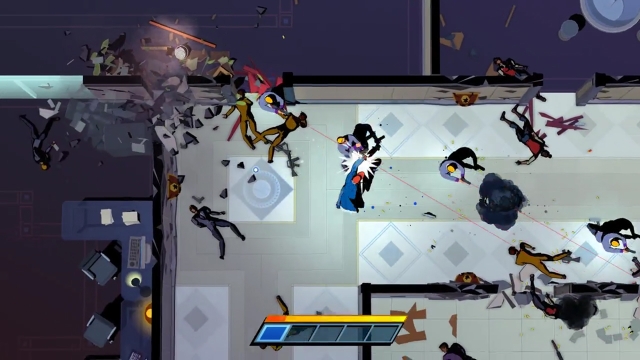 At least the story is decent. Or, more precisely, your interactions with the woman who directs you through the building. Nyx has more personality than the rest of the game put together, and her thoughts on the different developments are amusing. The music is another highlight. It keeps the adrenaline flowing, even when it turns out you were wandering through an empty corridor with nothing to fear. I wouldn't expect any of the audio to stick with you when you turn off the power, but it does a good job of accompanying the action that takes place. Sometimes it almost made me feel invincible, like Jason Statham in "The Transporter." Then I died--a lot--and remembered that actually, I'm more like Jack Black's ill-fated character in everyone's favorite slasher film, "I Still Know What You Did Last Summer."

Mr. Shifty isn't a particularly memorable game, despite the neat premise and the hero's slick moves, because too much of the experience feels the same even when you're prepared to forgive the repetitive mechanics. Your entire adventure plays out in a single tower, which means there's very little in the way of unique furnishings. You see a lot of small tables, desks, bookcases and statues, along with sterile corridors and crates. There are only a few varieties of thug, and the character models aren't particularly detailed or interesting. The presentation has a minimalist style that works well enough for it at first, but that eventually wears thin and becomes part of the grind.

If you're looking for something a little different from the norm--and decidedly more violent--to keep you busy for a few hours, Mr. Shifty is worth some consideration thanks to its sub-$20 price tag. It doesn't offer any highlights that will likely linger on your mind for long, but it's a decent enough way to pass the time until something better comes along.

If you enjoyed this Mr. Shifty review, you're encouraged to discuss it with the author and with other members of the site's community. If you don't already have an HonestGamers account, you can sign up for one in a snap. Thank you for reading!

© 1998 - 2023 HonestGamers
None of the material contained within this site may be reproduced in any conceivable fashion without permission from the author(s) of said material. This site is not sponsored or endorsed by Nintendo, Sega, Sony, Microsoft, or any other such party. Mr. Shifty is a registered trademark of its copyright holder. This site makes no claim to Mr. Shifty, its characters, screenshots, artwork, music, or any intellectual property contained within. Opinions expressed on this site do not necessarily represent the opinion of site staff or sponsors. Staff and freelance reviews are typically written based on time spent with a retail review copy or review key for the game that is provided by its publisher.