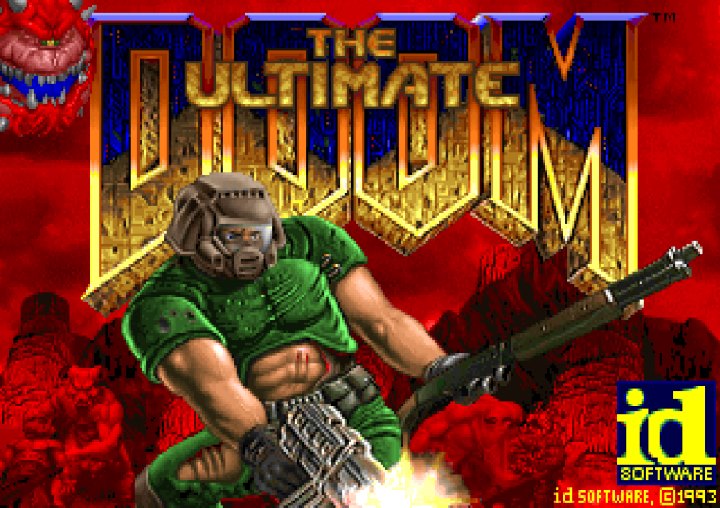 Doom was one of those games that changed the standards of the video game industry forever. Some might say it was the first 3D shooter ever, which of course is not true, Wolfenstein 3D came before it, but that was also an Id title and they still hold all the credit. It did, however, set the standards for every first-person shooter made going forward.

The word 3D is actually a misnomer when applied to Doom, though, as its engine did not actually render things in true 3D, though it did a damn fine job of providing the illusion of it. Case in point: You cant actually look up or down in the original build of the game, because doing so would result in weird distortions. Also, none of the maps in Doom featured overlapping sectors; that is, there are absolutely no rooms placed above or below other rooms. In fact, there was no actual 3D modeling anywhere in the entire game. It was all vectors, sectors and sprites, but since John Carmack is a coding genius, he managed to give us the closest possible thing to true 3D while packaging it within an exceptionally enjoyable game. The side bonus was that Doom had very reasonable system requirements, making it accessible to everyone. And by everyone, I mean everyone who owned a PC played Doom at some point. There was no escaping it, because there were no alternatives. Alternatives eventually did come, but most paled in comparison.

It could be argued that Doom was not a perfect game; it was not terribly complex and could be highly repetitive at times. All you did was shoot one demon after another throughout all three of its lengthy episodes, with some light puzzle solving and key-finding in between. However, theres a lot to be said about augmenting substance with style. Dooms graphics, music, sound effects and atmosphere were so chillingly effective that they provided an immersive experience the likes of which had never been seen before. Monsters would groan and hiss in the distance as they relentlessly hunted you. Your weapons would light up dark corridors as you fired, revealing the sneering faces of angry monsters lurking in the shadows. It was all smoke and mirrors, but thats what games are about. Were all here to experience a convincing illusion, and thats what Doom did best of all. 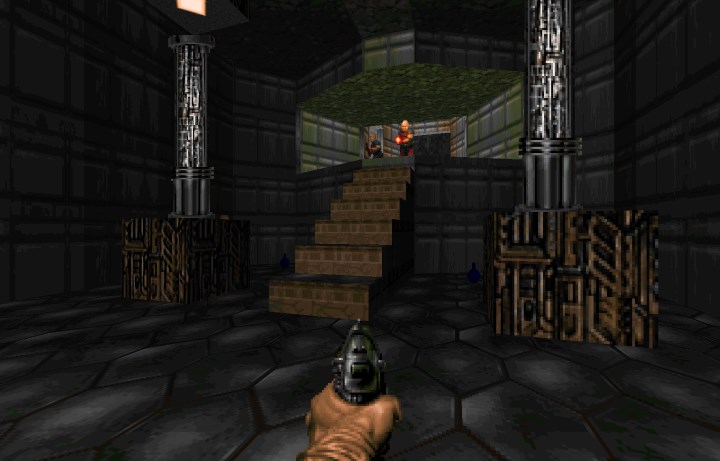 Doom was also bolstered by its level design. The campaign starts off light as you explore the Deimos base, which is not yet heavily infected by Hells corrupting influence. There are plenty of monsters to kill, but each part of the facility simply looks like a typical sci-fi moonbase. The horror has not yet ramped up yet; you are still firmly in the grips of an action game, having fun and kicking ass.

Then in episode two, things start to get a bit creepier. You migrate over to the Phobos base, where the hellspawn have been busy prettying up the place with their trademark Satanic architecture. Still, most of the structures look more or less intact in their gritty sci-fi glory.

Then, when you reach episode three, you descend to the Martian surface and realize that the powers of Hell are in full force. All of the markers of conventional reality are gone. The floors and walls are now made up of twisting snakes, skin and entrails. Demonic shrines and the corpses of sinners are everywhere. The difficulty also ramps up exponentially, adding to the fright and horror. You are constantly low on health and ammo. The big bosses of the first episode, the Barons of Hell, are now a commonly-encountered enemy. Everything you went through in the previous episodes is peanuts compared to this, and getting out alive is an achievement all its own.

Aesthetically, Doom was also very inspired. It was fascinating to see Ids take on what Hell looked like. Each location was distinctly unique. The House of Pain was clearly a site for torture. The Unholy Cathedral was perhaps where the demons would congregate to worship Satan. The Limbo level was a dark subterranean maze of inscrutable purposes. Mount Erebus was a fortress nestled in a lake of lava. Some of Dooms environments had incredible presence to them, and the amazing texture work by Adrian Carmack and Kevin Cloud helped bring them to life. 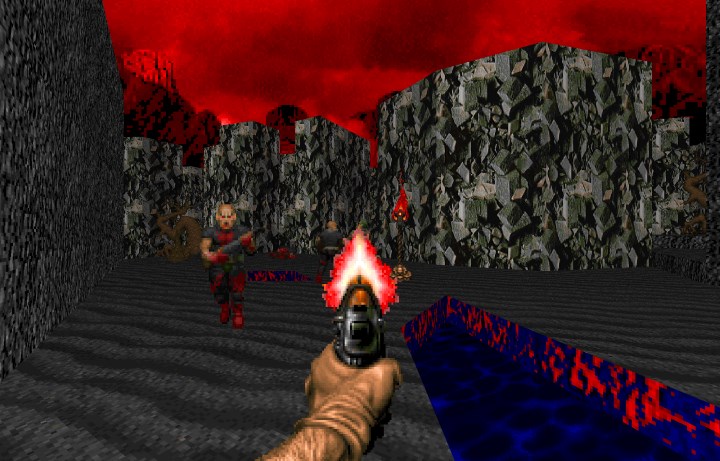 Then, after defeating the Spider Mastermind, the final boss of episode three, you travel through a portal that leads to Earth and you realize that the demons have already invaded there. They have also not been very nice to Earths flora and fauna, particularly of the lagomorphic variety. So, you grit your teeth, load your gun, and set stage for Doom 2: Hell on Earth.

But then, like a beautiful symphony ending with a loud, smelly fart, you get to the Ultimate part of The Ultimate Doom, which is a curious fourth episode called Thy Flesh Consumed. It somehow takes place in Hell, even though you supposedly just left there. Wait, what? Why are you back here? Why is the level design suddenly so shitty? Why do the levels have nondescript edgelord titles such as Perfect Hatred and Sever The Wicked? Why is there a fucking Nine Inch Nails logo on the ground? Were your parents warnings about heavy metal being the work of the Devil actually true? Cue eyeroll.

In actuality, Thy Flesh Consumed was simply a tack-on feature designed to provide extra incentive to buy the retail edition of the game. It was also largely a piece of shit. When injected into the continuum of the storyline, it made absolutely no sense whatsoever. The levels lacked the artistic vision and tension-building of the previous episodes, tended to vary widely in difficulty, and just felt kind of random. They also brought absolutely nothing new brought to the table. There were no new weapons, no new monsters, no new textures, no new music, nothing. It was like Id wasnt even trying. 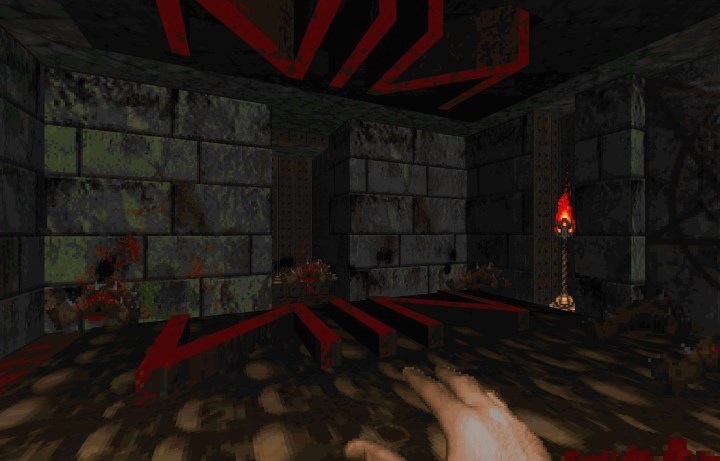 So, in the end, after you kill the Spider Mastermind again (despite the fact that he is supposed to already be dead), you are treated to a poorly-drawn graphic of the Doom Guy holding the decapitated head of the bunny that we saw in the ending sequence of episode three. Apparently, the bunny was actually the Doom Guys pet or something, and his entire reason for going back into Hell was to avenge her. Cue eyeroll again.

Honestly, we could have done without this. I understand that Id's original shareware model of distribution did not allow the full version of Doom to reach the same audience that a boxed retail copy would, and I do not begrudge them for wanting to boost the sales of their game, but its just a shame that The Ultimate Doom was packaged with such an errant turd of an episode that only ended up tarnishing such a masterpiece.

That aside, the Ultimate edition still provides the untouched classic Doom experience within its first three episodes, complete with all of the patches and bug fixes that were not included in the original mail-order release. Any way you slice it, those first three episodes are still amazing to play even today, particularly when utilizing ports like Zdoom that streamline the experience and bring it into the modern era.

With that said, I would really recommend not playing the fourth episode at all. Youre really not missing much.

If you enjoyed this Ultimate Doom review, you're encouraged to discuss it with the author and with other members of the site's community. If you don't already have an HonestGamers account, you can sign up for one in a snap. Thank you for reading!

© 1998 - 2022 HonestGamers
None of the material contained within this site may be reproduced in any conceivable fashion without permission from the author(s) of said material. This site is not sponsored or endorsed by Nintendo, Sega, Sony, Microsoft, or any other such party. Ultimate Doom is a registered trademark of its copyright holder. This site makes no claim to Ultimate Doom, its characters, screenshots, artwork, music, or any intellectual property contained within. Opinions expressed on this site do not necessarily represent the opinion of site staff or sponsors. Staff and freelance reviews are typically written based on time spent with a retail review copy or review key for the game that is provided by its publisher.