While playing through Twilight Princess, it was hard for me to not wax nostalgic about the games in The Legend of Zelda series I'd played in my younger years. I remembered how much of their appeal was centered around you immediately taking control of your character and leaping into action; of exploring a vast world to find its dungeons, let alone the items necessary to survive exploring those places. It was a glorious time for me and probably played a very large role in the simple fact I'm still playing games whenever I have free time, as well as writing about them.

Why was I nostalgic? Because while playing Twilight Princess, I simply couldn't shake this little voice inside my head telling me that Zelda was now just another video game series. A very good series that deserves better than to be compared to a lot of the stuff that gets released on a regular basis, but definitely not the divine creation I loved during my teens and 20s.

Don't get me wrong -- at its best, Twilight Princess delivers. For the most part, I loved the dungeons in this game. They were vast structures that were a blast to explore. No two could even be described as remotely similar, so I felt a certain thrill as I approached each one, not knowing what challenges would confront me. Midway through the game, I entered Arbiter's Grounds and found myself in a former prison that could have fit into a Silent Hill game. Swarms of insects threatened to weigh me down as I tried to cross rivers of sand before being dragged under. Undead creatures roam its halls and chambers, including powerful beings able to paralyze Link with their screams before cleaving him with their swords.

From there, I found myself at Snowpeak Ruins -- a large, somewhat dilapidated mansion housing a pair of yeti, one of whom is afflicted by a mysterious malady. While her husband tries to brew medicine in the kitchen, she'll send you through the building in search of the artifact you traveled there to obtain. If you think that sounds easy, well, her illness seems to be affecting her memory, so rest assured, you will cover every inch of this building before reaching your objective! The Lakebed Temple gives off every impression of being a gigantic underwater structure that's been abandoned and fallen into ruin over untold years, with nearly every action you take altering the water flow in order to open massive multi-floor chambers up for exploration. I could spend a lot of time talking about these places, how massive they could get and how much fun it was to puzzle my way through, making the best use of the many tools I'd obtained in order to get through challenge after challenge on my way to the inevitable boss fights.

Speaking of those tools, I could spend a lot of time talking about those, as well. While the City in the Sky would be an impressive floating metropolis on its own, being able to wield two clawshots and zip through the air, hooking yourself to anything offering a grip, just takes things to a whole new level of awesome. The Goron Mines bestow a pair of magnetic boots, allowing you to defy gravity as long as the proper surface exists to walk upon; while the Spinner essentially turns Link into a roller coaster car, as he can connect it to rails situated along certain walls and speed along them. If nothing else, its presence made the giant skeletal boss of Arbiter's Grounds one of the game's more memorable opponents, as I found myself zipping along rails, jumping from one to another in order to avoid both obstacles and its attacks while attempting to get close enough to launch my offensive.

And there were a lot of other positives. Twilight Princess' world is pretty beautiful, making this a fun game to look at, as well as play. Also, while I've had my share of complaints about the Wii's motion controls since I bought the system, I do have to admit I enjoyed them here. Part of that was because I finally moved things around a bit in my living room, so it felt less awkward for me to hit that sweet spot between my control and the sensor bar. And part of that was because it's pretty damn fun to engage in sword fights against giant armored knights capable of blocking any attack you make unless you're able to outmaneuver them. Too bad those knights are really rare opponents, only appearing in a couple select locations, because a lot of your opposition tends to prefer the strategy of running directly into your swinging blade as opposed to anything actually effective. 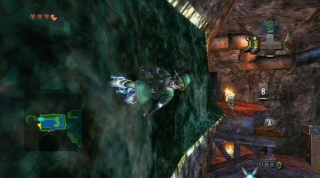 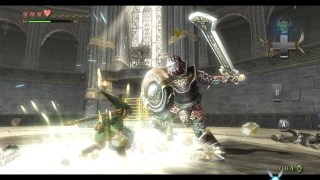 So, by now I imagine you're wondering what my issues with this game were, since I just spent four paragraphs praising many of its aspects. Simply put, what I loved most about the old Zelda games was how you could pick them up and, within moments, be doing something fun like exploring a dungeon.

Let's take a brief look at how some of the classic Zeldas began. With The Legend of Zelda, you immediately grab your first sword and set out into the world. You can run around to grab a couple heart containers and even the first sword upgradeor you can immediately dive into the first dungeon by only moving a few screens. In A Link to the Past, you'll wake up during a stormy night, quickly find your mortally-wounded uncle and set out to rescue Zelda from Hyrule Castle in what serves as a tutorial dungeon. From there, the game's world opens up substantially as you attempt to reach the first of several larger dungeons, giving you plenty of nooks and crannies to explore. Finally, Ocarina of Time quickly sends Link to the great tree serving as its first dungeon, with him just needing to complete a tiny handful of small quests that serve to equip him for that trial. All three games eschew time-wasting activities to place you directly into the action. In comparison, Twilight Princess

2. An event happens and Link springs into action! In fact, you'll get to fight through a number of foes in order to rescue a missing child. You'll explore all the way up to the door of the first dungeon, but won't actually enter it. However, you'll pick up a lantern to add to your growing list of items. Things are picking up!

4. And a domestic situation. While you were out fighting stuff, apparently beloved horse Epona got lightly scratched, causing potential love interest Ilia to become incensed. While in the process of making up with her, a much more important event happens. Namely, a big portal appears, monsters attack and you'll find yourself imprisoned in a strange land. Oh, you've also been transformed into a wolf.

5. This is the game's big gimmick. You're now in the Realm of Twilight, accompanied by Midna, an incredibly bossy imp who tells you to do whatever she says if you want to have any chance of either getting home or returning to normal. As far as storyline purposes, important stuff happens. You're introduced to Midna and to Princess Zelda, who is held captive in this realm. You're also told of Zant, who usurped the power of Twilight, took control of that world and plans to add your world to his conquests. In reality, this is another tutorial, as you'll learn to use the wolf's senses to find various secrets, to dig holes and to use Midna to leap places you wouldn't be able to reach naturally.

6. Eventually, you get back to your village; however, Twilight has taken hold. In order to dispel it so the local guardian spirit can reassert itself and you can become human, you'll have to use your wolf senses to find a LOT of Twilight Bugs. Destroy them all and you'll be teleported back to the village's spring, with Twilight dispelled from the area. Now, after back-tracking all the way through the bug-killing grounds, you'll !FINALLY! be able to enter the game's first dungeon! 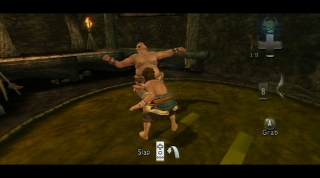 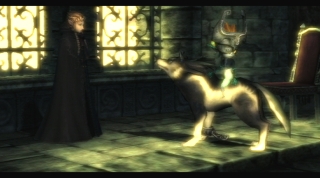 Later on, to reach both of the next two dungeons, you'll have to go back into Twilight, get turned back into a wolf and hunt down many more bugs. You'll also sumo wrestle a Goron, escort a carriage through hostile territory and partake in other activities that are most definitely not dungeon exploration. After beating Lakebed Temple, at least the bug hunts are in your rearview mirror, which gives the game a better flow, but it felt like it took an eternity to get to that point. If not for the dungeons, I doubt I'd have had the patience or desire to endure the rest. This game takes place in a vast world where interesting and/or useful things are placed really far apart, so I just didn't have the same desire to explore as I've had in those past, cozier Zelda games. I found myself using an online guide whenever I had to go places in the main world in order to get all the heart containers, golden bugs and other collectibles as quickly as possible and then turning off the computer and actually "playing" after accessing the next dungeon.

Still, those dungeons were fun enough that I'd recommend Twilight Princess -- just not as whole-heartedly as I've endorsed past Zelda games. There's just too much busy-work and padding in this one for my tastes. I want to talk about how the final couple bosses were awesome battles that made me use virtually every skill I'd obtained throughout the course of my adventure, not about scouring a village for those final couple bugs. I want to describe just how awesome a particular dungeon was, not talk about the hours of busywork I endured before I could finally enter the place. While this is still a good game and Zelda is still a good series, it's a shame I have to talk about those things instead of simply gushing about how fun the good stuff is.

If you enjoyed this The Legend of Zelda: Twilight Princess review, you're encouraged to discuss it with the author and with other members of the site's community. If you don't already have an HonestGamers account, you can sign up for one in a snap. Thank you for reading!

© 1998-2021 HonestGamers
None of the material contained within this site may be reproduced in any conceivable fashion without permission from the author(s) of said material. This site is not sponsored or endorsed by Nintendo, Sega, Sony, Microsoft, or any other such party. The Legend of Zelda: Twilight Princess is a registered trademark of its copyright holder. This site makes no claim to The Legend of Zelda: Twilight Princess, its characters, screenshots, artwork, music, or any intellectual property contained within. Opinions expressed on this site do not necessarily represent the opinion of site staff or sponsors. Staff and freelance reviews are typically written based on time spent with a retail review copy or review key for the game that is provided by its publisher.