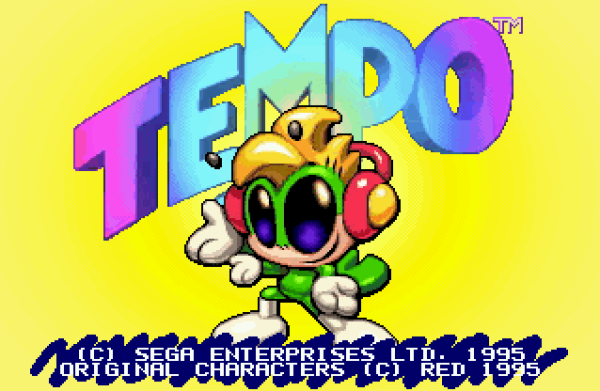 Do you remember the early-to-mid '90s and its assortment of cartoons? There were some great ones then, and a handful that even hold up today. However, if you scour that category thoroughly, you'll dig up some embarrassing examples that folks like myself are afraid to acknowledge. Mainly, there was a plethora of programs that tried too hard to appeal to young viewers by throwing out as much "hip" content as possible. Everyone wore sunglasses, danced to hip hop and had an attitude. It was all cringe-worthy, like listening to your parents try to speak to you in modern slang.

There are plenty of video game equivalents out there, too. The 32X platformer Tempo springs to mind...

At first glance, Tempo appears innocent enough. It sports a colorful art style and an adorable protagonist who can't sit still. He dances to the rhythm of the BGM whenever you're idle, and you can't help but melt. I don't blame him for bopping around, honestly. The main theme and other cuts from the soundtrack are catchy, albeit cheesy. They all possess a lively groove that befits the genre whilst accentuating the game's urban vibe. 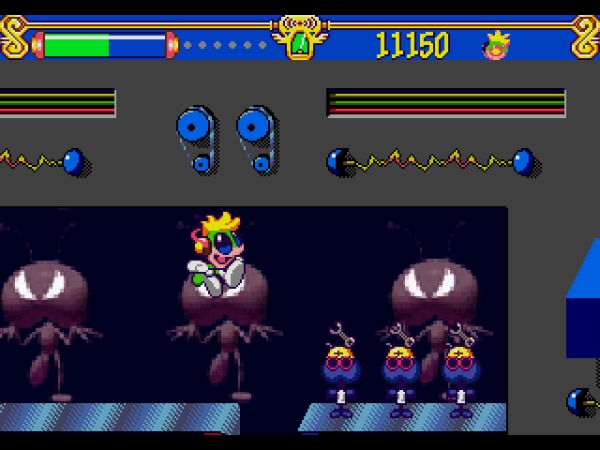 Out of the gate, Tempo places you in front of a studio audience with three levels from which to select. Once you've settled on one, the madness begins. The presentation that once reminded you of a neglected cartoon of yore transforms into a visual assault. Random objects fly about or dance in the background. One stage that transpires inside an enormous monster's belly features huge red blood cells floating in the distance. That might sound innocuous, but most titles use variant shades on their background images so you can differentiate them from your layer's environment. However, the blood cells aren't shaded any differently than the objects around you and seem like they might pose a threat. I attempted to dodge them when I initially encountered them, only to discover they were harmless. Sadly, I ended up bumping into numerous legit hazards after that, because I thought they also were part of the scenery.

My inability to distinguish friend from foe didn't stop there, either. Malevolent golden pillars turned out to be warps that transferred me to secret regions. Disembodied hands were actually shot upgrades. Televisions that looked collectible electrocuted me. Massive, hungry frogs served as platforms. One scene paid homage to Atari 2600, complete with retro-style ships displayed on a screen, a la Space Invaders. As I stopped to admire them, they shot me. It doesn't help that, like the aforementioned early '90s cartoons, Tempo is wacky as can be. The game utilizes peculiar items as enemies and even stranger things as platforms. By far, the oddest phenomenon was a cluster of crystals that appear to be power-ups, but actually harm you. If you touch a nearby crystalline mound, it transforms into a flower and changes the crystals into healing music notes. I have a feeling drugs were involved in the making of this adventure. 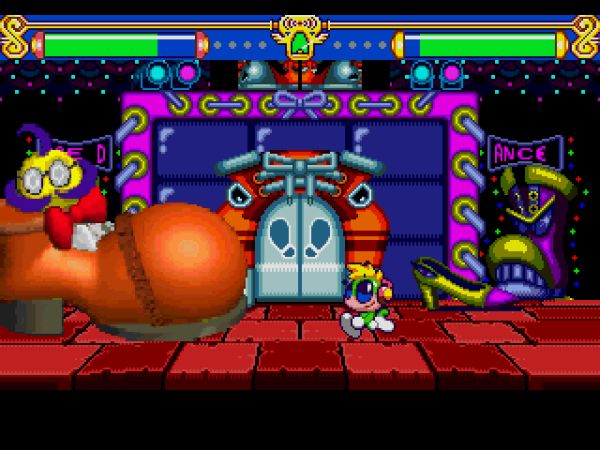 Tempo breaks from platformer tradition by crafting convoluted stages that offer branching paths and hidden troves. It's neat to see fully fleshed out levels, but they suffer from the above flaws. For instance, a steel structure sits in the background of one segment. It appears you can walk on it, but you learn otherwise when you fall past it after executing a floating jump. Later on, decorative leaves wait for you to leap onto them. However, you might mistake them for ornamentation at first glance and not realize that you have to leap onto them to advance farther.

Combat further hinders the Tempo experience by pitting you against enemies you can't kill easily enough. Most of them perish after you hop on them, but there are some you need to kick or nail with projectiles. The former ability is unreliable, because your foot's hit detection is faulty. I've kicked numerous adversaries to no avail, and thus believed they were immune to my boot. Later on, I managed to accidentally kill one by kicking it. That, my friends, is the definition of betrayal.

Honestly, you don't realize how inadequate Tempo's battle system is until you face off against a boss. It isn't bad enough that the game's rogues gallery is lazily designed. I mean, the first few bosses are inanimate objects, such as a boxing glove or a shoe (I'm not making this up; you fight a frickin' shoe), with evil eyes attached to them. Most of the bosses wander aimlessly, occasionally launching easily avoidable assaults. There are a couple, though, who have impenetrable defenses and only fall with luck. The most aggravating altercation of them all involves a clown armed with a cane. He uses the device to block your jumps and projectiles, but occasionally leaves himself open. When he's vulnerable, however, your bullets arbitrarily pass through him. And hopping on him randomly damages you instead of him. 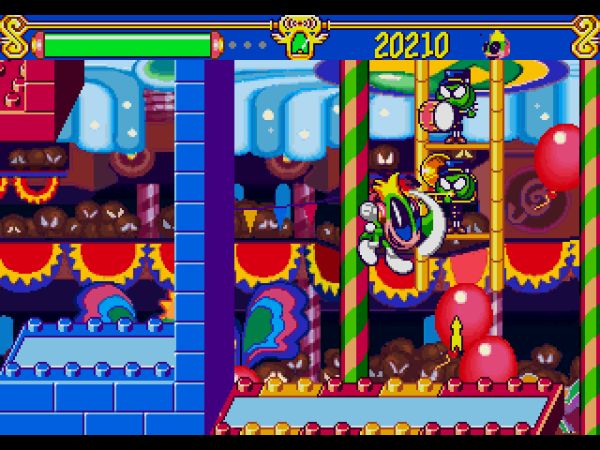 The insanity doesn't stop there. You might notice from the get-go that Tempo is sluggish. Walking is laborious and tiresome, though the hero's jittery jaunt belies a fast-paced title. The good news is you can run by double-pressing left or right. Sadly, Tempo takes off at break-neck speed when sprinting, rendering him difficult to control. No matter which speed you select, you can't win.

Most of Tempo's content comes off as an attempt to appeal to children. It's overstuffed with contemporary dance music, urban themes and balls-out weirdness. It's as if the developers tried to shotgun cool material, figuring something in the blast would resonate with '90s youths. Sadly, all they managed to do in the end was overthink a simple, adorable platformer, by cramming in unnecessary touches and neglecting the game's unstable mechanics. Had they stuck to devising a functional, fast-paced sidescroller, they might have actually programmed a winning adventure.

If you enjoyed this Tempo review, you're encouraged to discuss it with the author and with other members of the site's community. If you don't already have an HonestGamers account, you can sign up for one in a snap. Thank you for reading!

© 1998-2021 HonestGamers
None of the material contained within this site may be reproduced in any conceivable fashion without permission from the author(s) of said material. This site is not sponsored or endorsed by Nintendo, Sega, Sony, Microsoft, or any other such party. Tempo is a registered trademark of its copyright holder. This site makes no claim to Tempo, its characters, screenshots, artwork, music, or any intellectual property contained within. Opinions expressed on this site do not necessarily represent the opinion of site staff or sponsors. Staff and freelance reviews are typically written based on time spent with a retail review copy or review key for the game that is provided by its publisher.