Alwa's Awakening is a sidescrolling platformer that introduces Zoe, a normal girl who was summoned to the magical kingdom of Alwa to save it from an evil menace known as the Vicar. The game looks, sounds and often plays like a first-rate adventure from the final days of the 8-bit era, which makes it just about perfect for a very specific audience.

I've gotten to the end of many a review and realized that I didn't say anything about the soundtrack, but Alwa's Awakening wasn't about to let me do that. I started my time with the game by heading to the Settings screen to see what all I could tweak. As I turned on windowed mode, an awesome tune assailed me. I couldn't help but stop to listen to it for a bit. Then I started the proper adventure, and immediately there was more good music. The game is full of the stuff, I discovered. Each new area features a different composition, and I genuinely love most of them. That's not a compliment I offer lightly, either; a lot of games from all eras inspire me to mute the volume after an hour or two. 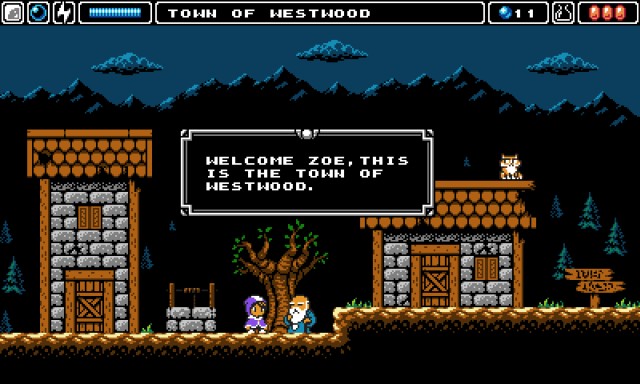 Visually, the game is also delightful. Environments and characters feel like something out of an old Capcom or Taito title, produced back when those companies were making some of the prettiest games for the available hardware. I'm not quite sure if all of this could have run on the NES, because I haven't counted colors on the screen and the number of moving sprites and such, but it feels to me like it probably could have... if only just barely. A lot of games that manage to produce that impression feel constrained by it, but that's not a problem here. Alwa's Awakening is the prettiest old school platformer I've played on new hardware since Shovel Knight.

I'm not sure what all games inspired the team that built Alwa's Awakening, but I think the early Metroid titles must factor into the equation somewhere. At first, the game seems like another straightforward platformer, but the feeling soon changes. You see a lot of ladders you can't quite reach, gaps you can't cross, and you know you'll be returning eventually to find out where those paths lead. Enemy resistance is weak, and traps are uncommon. You stumble across rooms with torches, where you can resume play if something goes wrong. Everything is so easy that you wonder how any of this could pose a threat to any but the most inexperienced of players. 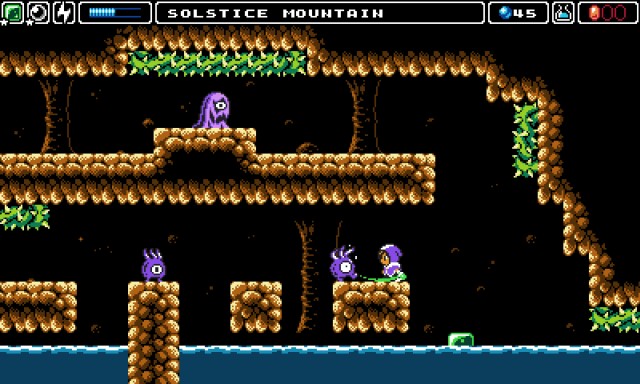 Gradually, though, the enemies grow fiercer. So do the environmental hazards. In situations where at one point you might have found spiked vines that inflict moderate damage, you now find lethal spikes that kill you with a single touch. Blocks drop toward lava-filled pits when you linger on them for a moment. Illusory walls let you pass through them to discover treasure and alternate paths. The once simple world has become an intricate puzzle, and you're right in the middle of it all, scratching your head and wondering when the transition took place.

I love all of those those things about Alwa's Awakening, and I suspect that most other people who are drawn to the game will feel much the same way. A number of the game's other qualities, however, are less pleasing. They still offer highlights that kept me going, but I found my admiration gradually dwindling. 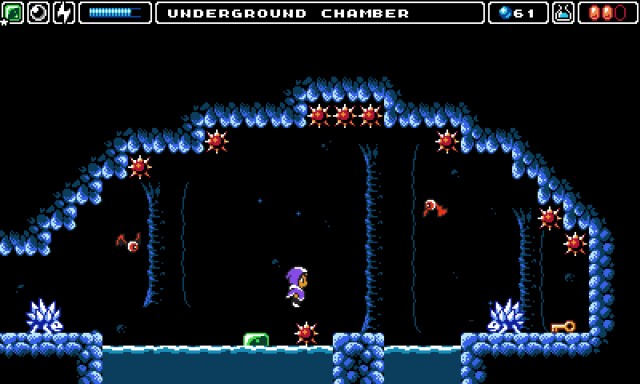 One of the things I don't like about the game is the sluggish pace at which its hero moves. When Zoe runs, she feels slightly heavy. It takes longer to cross a screen than you might expect, even at a full run. When she takes her best leap, she launches pretty quickly into the air, but then floats slightly as she descends. I definitely prefer her movement to that of the heroes in some games that are excessively responsive, but given how much ground you have to cover in Alwa's Awakening, the sluggish movement does feel rather irritating at times. With that said, however, I should note that a lot of the game's later portions wouldn't even work if Alwa moved any differently than she does. That leads to perhaps my biggest issue with the game: too much precision is required at some points. I lost dozens of lives as I ascended the final tower, because some of the chambers expect too much of you and offer almost no margin for error.

For instance, there is one instance when you have to jump out from a ledge (over a bed of spikes), conjure up a block and drop it into some water. Then you have to manage to glide back left so that you land on solid ground, then quickly hop back out to the right (all while avoiding the surrounding spikes) so that you land on the block you created, which started floating toward the right as soon as it hit the water. As your makeshift platform continues drifting toward the right with you perched precariously on it, you then have to produce a bubble that you can ride upward to clear a wall of spikes. Then you have to make a long leap without brushing against the spiked ceiling. Your goal is to land on the floating block again, in time to jump and fire a bolt of lightning to clear an obstacle while you are in the air, so that you can land on the block and then immediately jump to clear another patch of spikes. 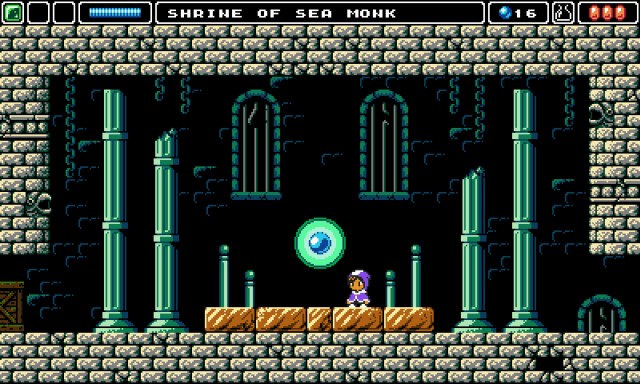 In the preceding paragraph, I described a single screen's worth of content. That final tower stitches four or five such screens together at a time, all without a checkpoint. So if you mess up on the fourth or fifth screen in a particular gauntlet, you'll have to start again from the first one. And even if you get to the point where you could clear those early screens in your sleep, some of them require timing and patience that are difficult to manage on the fifth or tenth attempt, just so you can get back to the place where you last failed. I began to long for the game's opening moments, when checkpoint rooms felt almost too plentiful.

Thanks to the game world's intricacy, which is in most respects a strength, you're also going to spend a lot of time backtracking. This means that you might see some screens 20 or 30 times over the course of your adventure. There are warp chambers that you can use to pop around the world, but there are only six of them and some of them are easy to miss. Some items also lie buried near the end of a particular dungeon region, but the nearest warp point is positioned at the entrance. When you have to return much later in the game to find some treasure that wasn't previously available, that means you get to cover a lot of old ground. You may also find other rewards for doing so, like a bunch of collectible blue orbs that gradually give you an edge in the infrequent (but typically challenging) boss encounters, but there still are long periods where you're navigating a particular area for the fifth or sixth time after not particularly enjoying your third and fourth visits. 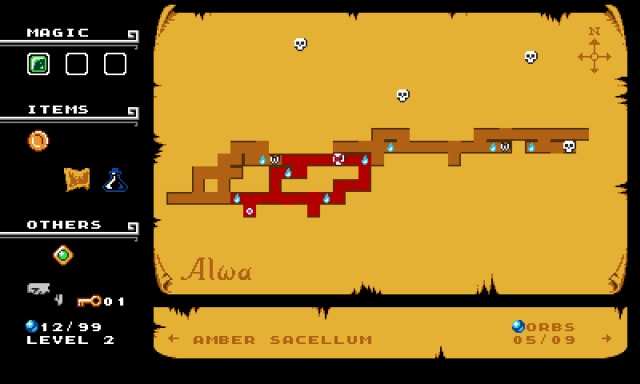 When Alwa's Awakening boots, the first thing you see is a message of gratitude from the developers. It notes that the team spent more than two years working on the project, and I find that claim credible. Everything looks and sounds like the most polished of NES classics, and the intricate world design is impressive. The labyrinthine land of Alwa is packed full of secrets that you'll spend hours discovering, and there are remarkable moments sprinkled throughout the experience that should keep gamers coming back for more even when the going gets rough.

With better checkpoint placement, more helpful fast travel and less uneven difficulty, Alwa's Awakening could have been an old school adventure for the ages. As things stand, though, I'm forced to recommend the game only to players who likely have already passed on it because they thought it looked too easy and basic. They may never know how wrong they were...

If you enjoyed this Alwa's Awakening review, you're encouraged to discuss it with the author and with other members of the site's community. If you don't already have an HonestGamers account, you can sign up for one in a snap. Thank you for reading!

© 1998-2021 HonestGamers
None of the material contained within this site may be reproduced in any conceivable fashion without permission from the author(s) of said material. This site is not sponsored or endorsed by Nintendo, Sega, Sony, Microsoft, or any other such party. Alwa's Awakening is a registered trademark of its copyright holder. This site makes no claim to Alwa's Awakening, its characters, screenshots, artwork, music, or any intellectual property contained within. Opinions expressed on this site do not necessarily represent the opinion of site staff or sponsors. Staff and freelance reviews are typically written based on time spent with a retail review copy or review key for the game that is provided by its publisher.