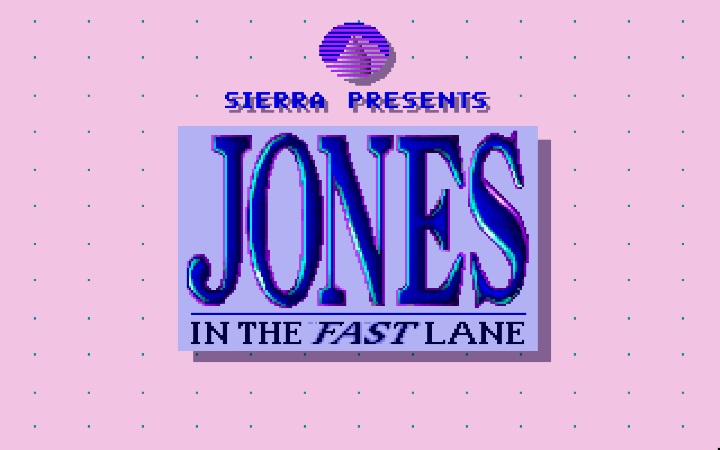 Hello, friend. Let me take you back to 1990. It was a magical time when the economy didn't suck, educational degrees still had value, unpaid internships weren't a thing, and people could realistically pay off their debts within their lifetime. In this idyllic world of yesteryear, there was a game called Jones in the Fast Lane that featured such things.

Jones is essentially a computerized board game with a vague resemblance to The Game of Life. The goal is to climb to the top of the socioeconomic food chain to become richer and more successful than your friends (or the AI, case depending). To do this, you must attend school, work jobs, and manage the minutiae of daily living, such as keeping yourself fed and paying your rent on time. However, this is not as easy as it looks, as you only have a limited amount of time available every week to get these things done. If you miss something important, you will suffer consequences. For example, if you decide not to eat during the week, you will receive a time penalty during the next week. If you fail to pay your rent, your wages will be garnished by your landlord. You know. Typical life stuff.

Eventually though, you will gain enough education and experience to ask for a raise or land a better job in pursuit of those coveted top-paying positions. It's not enough to simply amass a large amount of money to win, though. You need to raise four personal stats in the categories of Wealth, Happiness, Education and Career to round yourself out. The only thing missing here is a social element, such as forming a relationship or getting married, but that's not possible in this game. It's just as well, though, as the only other living beings in this materialistic madhouse are the other players you are competing against, and the annoying store clerks who shout one-liners and bad puns at you. Who needs friends in that kind of world anyway? 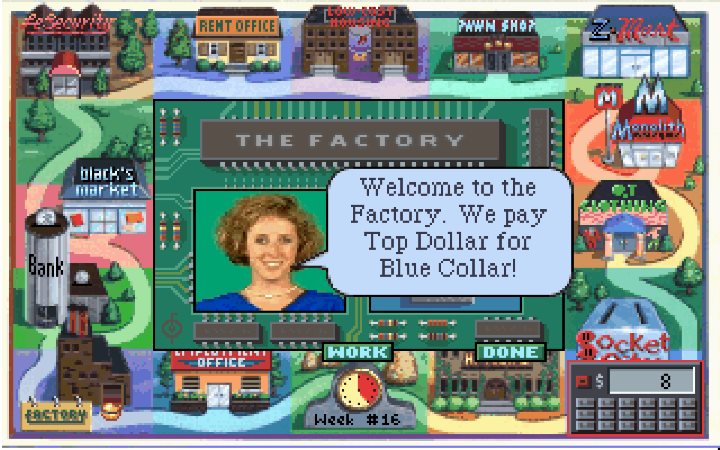 While your rise to fame and fortune is pretty straightforward most of the time, Jones in the Fast Lane is actually a rather complex game with plenty of nuance to it. Every location on the board has stuff for your character to buy or tinker with, and a certain amount of strategy can be applied. For example, buying a fridge will allow you to store food at home so you don't have to subsist on more expensive fast food. Depositing money in the bank will keep it safe (which is important, as you can get robbed). You can also play the lottery, trade stocks, or pursue a myriad of educational vocations. Logistics also matter. Getting a job close to home might save you precious time during the week, as traveling between locations on the board quickly eats up your time. Or, if you're studying at the university, it might not be a bad idea to get a job there to cut out your commute entirely. Efficiency is key in the "fast lane".

Then, once your week is done, other players will take their turns. Or, if you are playing against the AI, you will inevitably be pitted against the titular Jones, a creature who has surreptitiously evaded the FMV rendering process to exist purely as a cartoon character. You will come to hate Jones, because he likes to cheat. Always keep an eye on him whenever he goes to the supermarket to buy lottery tickets, as he seems to have a method and always wins. He also seems to know exactly when the best job openings are available and will immediately snatch them up, much to your chagrin. Whatever. This game is best played with real people anyway. 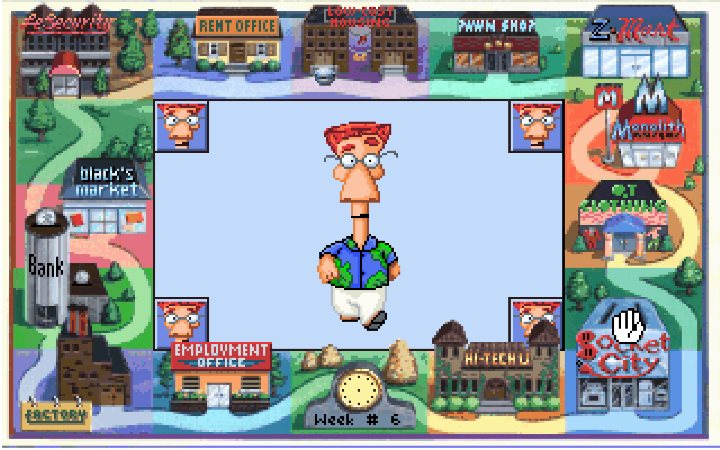 The pernicious AI aside, Jones is a surprisingly fun and addictive game. There is a certain satisfaction in building up your character, furnishing an apartment and buying lots of useless crap that somehow makes your character happy. It's sort of like a competitive, turn-based version of The Sims. It was certainly an unusual release for Sierra, who were mostly in the business of making adventure games at the time, but Jones nevertheless had enough creative talent behind it to give it a high degree of polish. The Adlib music was well-composed, the graphics were serviceable, and the FMV characters (while somewhat crude) were cutting-edge for their time.

The writing and humour was also quite sharp and sarcastic, though it is markedly dated by today's standards. It has a bit of a Rocko's Modern Life vibe to it, minus the anthropomorphic animals. I actually find it to be sort of quaint in retrospect. This game was made in an era where finding a job and succeeding at it was far easier than it is today, and the slice of life that it provides gives me all sorts of nostalgic warm fuzzies. It makes me wonder what this game would be like if it were remade today. Poverty Simulator 2017 perhaps? Jones in the End-Stage Capitalistic Nightmare? I dunno.

Anyway, if you can tolerate its occasional campiness and early 90s aesthetic, Jones in the Fast Lane is definitely worth a look, especially if you like exploring the hidden gems of yesteryear. I thoroughly enjoyed this game when I was eight years old and I enjoyed playing it again this week for the purposes of writing this review. I think you'll like it too, though I would recommend that you play it with a friend. It is currently classified as abandonware and runs comfortably on DosBox.

If you enjoyed this Jones in the Fast Lane review, you're encouraged to discuss it with the author and with other members of the site's community. If you don't already have an HonestGamers account, you can sign up for one in a snap. Thank you for reading!

© 1998 - 2022 HonestGamers
None of the material contained within this site may be reproduced in any conceivable fashion without permission from the author(s) of said material. This site is not sponsored or endorsed by Nintendo, Sega, Sony, Microsoft, or any other such party. Jones in the Fast Lane is a registered trademark of its copyright holder. This site makes no claim to Jones in the Fast Lane, its characters, screenshots, artwork, music, or any intellectual property contained within. Opinions expressed on this site do not necessarily represent the opinion of site staff or sponsors. Staff and freelance reviews are typically written based on time spent with a retail review copy or review key for the game that is provided by its publisher.