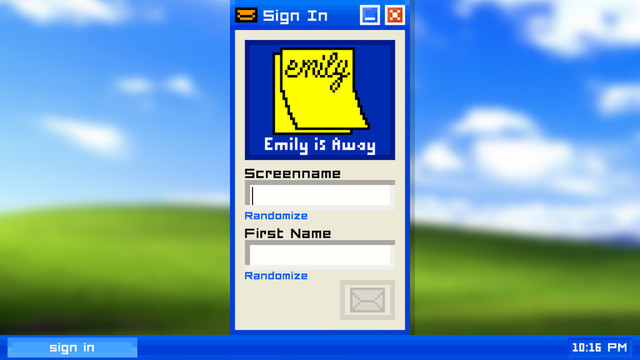 Emily is Away is an interesting game. Its short enough to be played in a single sitting, but its also free so there is no issue with cost. Your control over the narrative is limited, although you can exert some influence. The interface is an AOL Instant Messenger buddy list and chat window, with a pixelated Windows XP hill in the background. You enter your real name, as well as a screen name. The screen names provide some funny Easter eggs with achievements. You can use them to unlock additional buddy icons and make Emily say funny things, many of them anachronistic.

Doge and Undertale references aside, the game takes place in the pre-Facebook years of the Internet. I found it a little amusing and unnerving that I am the same age as these characters  I was also a high school senior in 2002. My school favoured MSN, though. It was a different world, where you had to talk to people directly not just scroll through their Facebook and like their posts. I remember waiting for a friend to turn off their Away message so I could talk. 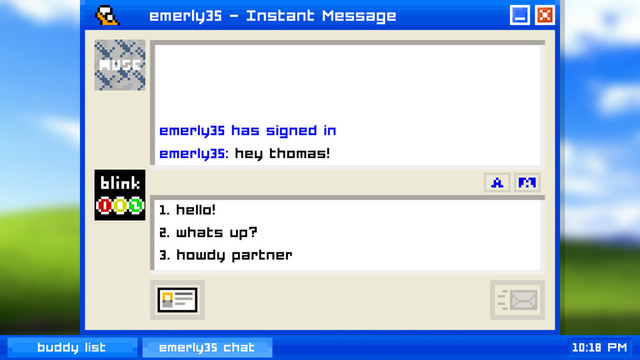 You will have conversations with your friend, Emily. It becomes obvious very quickly that you want to be more than just friends, though. Its just that you have a chronic ability to not actually tell her this. The game is pre-scripted. You simply choose one of three conversation options, then just mash the keyboard to type it out. Sure, there are some events that will give you a choice, but every time I have played this game, the ending is always the same. At least, I havent found a different ending yet. I havent tried every possible combination, yet.

Some of the choices reminded me a little bit of Monkey Island, where you would choose a dialogue option, but then Guybrush would think better of it and say something else instead. In psychological terms, it seems like the player takes control of the id, while the actual character talking to Emily is controlled by the super-ego. He will sometimes start typing something, only to delete it and go with something a little less direct.

It's a game that hit a little too close to home for me. I know all too well what its like to avoid saying what I feel, instead choosing for the safer option, the one that lets me still stay friends. You might also notice that Emily is also deleting some of the stuff shes typing.

Im not going to spoil specifics, though. Its free and its quick. I sometimes found myself forgetting that Emily was just a scripted character. I felt like she was my friend and I cared about her. I was happy to talk to her, and I got hurt when our conversations became more strained.

Go play it. And then talk to someone real, I guess.

If you enjoyed this Emily is Away review, you're encouraged to discuss it with the author and with other members of the site's community. If you don't already have an HonestGamers account, you can sign up for one in a snap. Thank you for reading!

© 1998 - 2022 HonestGamers
None of the material contained within this site may be reproduced in any conceivable fashion without permission from the author(s) of said material. This site is not sponsored or endorsed by Nintendo, Sega, Sony, Microsoft, or any other such party. Emily is Away is a registered trademark of its copyright holder. This site makes no claim to Emily is Away, its characters, screenshots, artwork, music, or any intellectual property contained within. Opinions expressed on this site do not necessarily represent the opinion of site staff or sponsors. Staff and freelance reviews are typically written based on time spent with a retail review copy or review key for the game that is provided by its publisher.