Hey there fellow gamer, were you a fan of Dungeon Keeper back in the day? Were you as pissed as I was when Electronic Arts decided to shelve that series for no good reason? If so, you're in luck. Dungeons 2 is, for all intents and purposes, a complete rip-off of Dungeon Keeper in almost every way, much in the same way that Cities: Skylines is a complete rip-off of SimCity. However, if that comparison is any indication, this is not a bad thing. Dungeons 2 does a good job of filling the demand for a "dungeon simulator", the likes of which we haven't seen since 1999, and succeeds in pretty much every way that counts.

This is one of those games where you get to play as the bad guy. Step into the shoes of "The Ultimate Evil", a mystical creature in black armor who coincidentally resembles Sauron from Lord of the Rings. He rules over a stygian kingdom of orcs, goblins and trolls, and is rightly pissed at the incessant trespassing of humans and other goodie-goodies who keep breaking into his domain to kill his minions, steal his treasure, and farm experience points. What a bunch of jerks!

So, one day the Ultimate Evil decides to take matters into his own hands. He steps into the realm of men, effortlessly knocking over their towers and castles, only to fall victim to a trap set by a group of powerful heroes. They perform a ritual to banish him into non-corporeal form, and subsequently his monster armies scatter to the winds. The Ultimate Evil is then relegated to the shadows, biding his time until the day when he can exact revenge on the nasty do-gooders who did him in. Thankfully, he still has some loyal followers to do his bidding, whether he is corporeal or not. 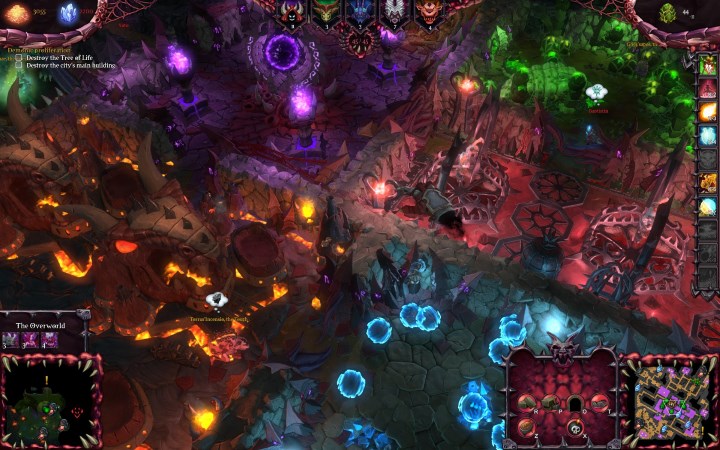 You begin your quest underground. Dungeons 2 is essentially one part RTS and one part city simulator, except that the "city" is an underground lair filled with monsters and traps. You command your minions using the Ultimate Evil's spectral "Hand of Terror", which is literally a giant floating hand, and with it you can order your minions to tunnel out rock, mine gold or build rooms. You can also physically pluck your creatures out of the dungeon and place them elsewhere, which is handy for reassigning them to another task. Or, if you need to motivate them to work harder, you can give them a firm, backhanded slap. Don't abuse them too much, though - if they become too angry, they may go on strike. They also need to be entertained, paid on time, and provided a constant supply of booze in order to be happy, as most of us do.

The nuances of dungeon-building here are complex, but never feel overwhelming. There are eight room types and fifteen minion types, and keeping the right balance will ensure that your stygian operations run smoothly. A certain amount of strategy can also be applied here. For example, placing a brewery next to your guard room can keep your posted guards' thirst at bay, whereas placing treasuries near veins of gold will ensure that your miners won't have far to go. This game also delves into the realm of tower defense as you build gauntlets of traps to thwart intruding heroes. All of this is easy to manage and quite satisfying.

Then, once you've got things running smoothly underground, you will be ready to send your troops to the surface to kick some ass. This portion of the game is pretty much exactly like any typical RTS or MOBA you may be familiar with. Draw boxes around your units to select them, assign them into groups, and send them into battle. The only difference is that you can't build anything, but thankfully neither can the enemies. Waves of heroes will emerge from pre-built camps and castles, but that's pretty much it. The more you destroy, the closer you come to victory. There is also a cool effect where the idyllic green fields and sparkling rivers of the human realm turn to lava and ash as The Ultimate Evil spreads his corrupting influence. 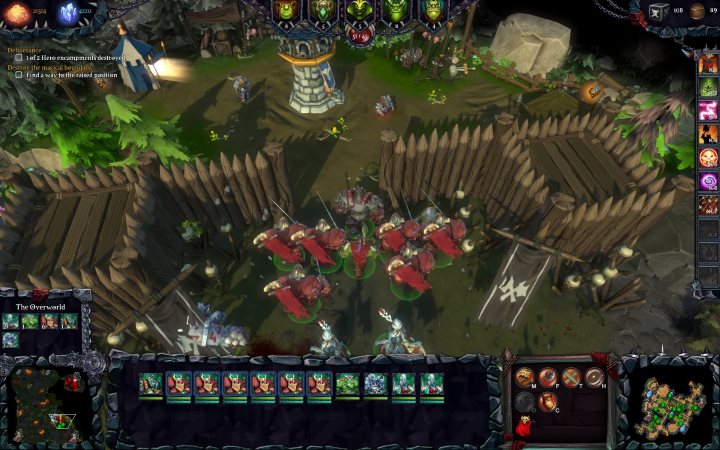 While this is plenty of fun, the RTS portion of the game is not quite as robust as I would have liked it to be. Ultimately it just boils down to whether or not you've accumulated enough monsters to overwhelm your enemies. I suppose I can't be too upset at this though; most RTS games basically boil down to this anyway. On the plus side, it is spiced up by some pre-scripted events, such as boss fights and unique objectives to keep things interesting.

In terms of tone, Dungeons 2 is far more comedic than Dungeon Keeper ever was, and wears its influences on its sleeve most of the time. It is packed with references to fantasy franchises such as Lord of the Rings, World of Warcraft and Game of Thrones to start, then throws in all manner of pop culture and current event references on top of it. One mission pokes fun at the Occupy Wall Street movement, where a series of human banks are being bailed out by gold-laden donkeys donated by the king, and it's your job to intercept them. Many of the randomly-selected names of your creatures will bear likenesses to famous celebrities or characters, such as "Mil'Kuniss" or "Mist'Burns". Ne'er a mission goes by without at least ten references; many of which you will get, some you might not.

Entertaining as this is, I have mixed feelings about it. The dialogue benefits from the excellent voice work of Kevan Brighting (better known for his work on The Stanley Parable), but it is so topical that it will likely become irrelevant within a few short years. This is in contrast to Dungeon Keeper, which had - and still has - a timeless quality about it. Dungeons 2 may be funny for now, but I wonder for how long. 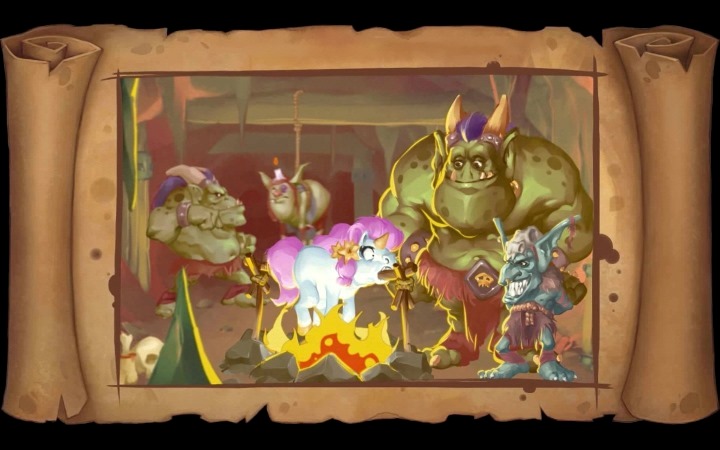 I was also irked by the fact that this game's campaign feels like a never-ending tutorial. The smart-mouthed narrator, who constantly mocks and encourages you, has the annoying tendency of instructing you on exactly what you should do and how you should do it throughout the entire game. Only in the very last mission does he finally cut you loose and leave you to your own devices.

The campaign is also not very long, which is a bit of a disappointment. After that, I suppose you're expected to play Dungeons 2's multiplayer, but hardly anyone seems to be playing it. A thread on the Steam community exists to match people with each other, which is certainly not ideal, but I suppose it's better than nothing. Suffice to say, without friends to play with, you're not likely to find a match easily. The only other thing to do is play through the DLCs, which add new maps and missions, but they seem to be lacking the unique objectives and narration that the campaign had. They are also not exactly cheap for what you get.

Overall, Dungeons 2 does a good job of scratching that Dungeon Keeper itch, but everything about it feels slightly off-key. For a game that is focused on the exploits of a ruthless demonic overlord, the tone of the game is surprisingly light. The darker elements of Dunegon Keeper, such as the prisons and torture chambers, have been removed or toned down. The music, while extremely well-composed, is often light and airy, reminiscent of Harry Potter films. The RTS sections, while a welcome addition, feel rote and lacking in features. 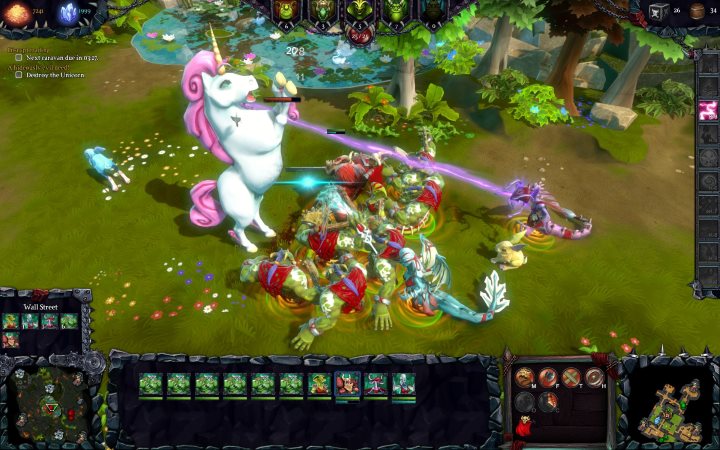 Nevertheless, the dungeon management portion of the game remains solid and satisfying, and that's pretty much the core of what Dungeon Keeper was about in the first place. I enjoyed my time with Dungeons 2, but I am aware of the fact that I probably feel that way because I was already a fan of Dungeon Keeper to begin with. I can't help but wonder what a new player might think about it, and whether or not some of its more annoying quirks might rub them the wrong way. Still, I'd recommend that people give it a try, especially if they are in the mood for a strategy game that does things a little differently.

If you enjoyed this Dungeons 2 review, you're encouraged to discuss it with the author and with other members of the site's community. If you don't already have an HonestGamers account, you can sign up for one in a snap. Thank you for reading!

© 1998 - 2022 HonestGamers
None of the material contained within this site may be reproduced in any conceivable fashion without permission from the author(s) of said material. This site is not sponsored or endorsed by Nintendo, Sega, Sony, Microsoft, or any other such party. Dungeons 2 is a registered trademark of its copyright holder. This site makes no claim to Dungeons 2, its characters, screenshots, artwork, music, or any intellectual property contained within. Opinions expressed on this site do not necessarily represent the opinion of site staff or sponsors. Staff and freelance reviews are typically written based on time spent with a retail review copy or review key for the game that is provided by its publisher.