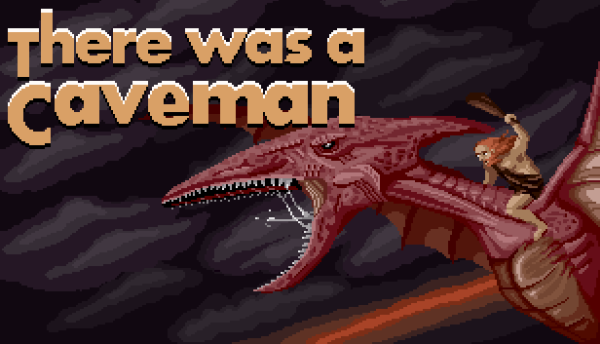 There Was A Caveman is an occasionally delightful ride through prehistory. At the same time, it's a tiresome cavalcade of genre cliches. It stars a primitive man armed with a club, donning an animal skin draped over one shoulder. He double jumps to reach lofty destinations and dashes--sometimes through the air--to cross wide chasms and dodge harm on the fly. Occasionally, he comes across sub-weapons, such as bones that fly in an arc, spears that stick to walls and serve as platforms, and stones that travel in long, straight lines. In other words, if you're looking for revolutionary content, you won't find it here.

There's nothing wrong with standard 2D platformers. Many of them are intuitive and fast-paced, not to mention difficult to muck up because they're so straightforward. Unfortunately, There Was A Caveman falters now and then, thereby spoiling some the advantage gained from its simplicity. For starters, its jump mechanics are awkward, especially when you pull off a double leap. Midair control response stiffens after the second bounce, preventing you from correcting your flight path when necessary. Thanks to this, segments with numerous high ledges or moving platforms are tricky to negotiate. Thankfully, though, acclimation sets in after a few dozen deaths.

Sub-weapons are a neat addition. However, Caveman doesn't make full use of them. They rarely appear, and when they do you only receive a few shots per pickup. Worse than that, they don't serve a distinct role half of the time. For instance, you might snag a boomerang during a sequence where ranged combat is neither necessary nor advantageous. The kicker is that these power ups could have benefited the campaign. Imagine a scene built around using scores of bones, where you need to take out airborne foes whilst ascending. Or perhaps a section where you scale the side of a mountain using carefully placed arrows. Caveman could have tested gaming skills besides just timing and reflexes, while remaining simple in its delivery. 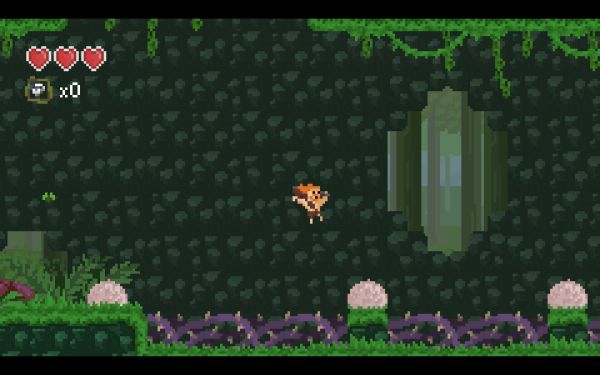 It's hard to complain much, though, because Caveman sports a handful of awesome moments. At the end of a forest stage, you battle a massive Pteranodon boss. He swoons following his defeat, allowing you to mount his back and take to the skies. There, you engage in a shoot 'em up mini-game where you annihilate giant bees and beetles. Afterward, you plunge into a lake brimming with carnivorous fish and deadly crustaceans, leading to a brawl against a mighty Kraken. From there, you can kiss safety goodbye as you outrun an avalanche, plummet into a frozen abyss lined with spikes, and travel through the innards of a fallen dinosaur. It's the perfect place to war with what appear to be anthropomorphic organs while avoiding pendulums composed of sinewy tissue tangled around digested Triceratops skulls. There's even a whole level that transpires in the afterlife, complete with a dino-Grim Reaper.

However, Caveman undermines its campaign's most memorable moments by showcasing lackluster gameplay. The aforementioned shmup section provides you with sluggish play control and only a handful of enemy formations. After only a few minutes of moderately paced blasting, you reach an anticlimactic conclusion before moseying on to the underwater level. There, you mash the jump button until your thumb falls off whilst evading tremendous, indestructible clams. To make matters worse, you often run afoul of scenarios where you have but a couple of seconds to out-swim a clam or fish while your thumb goes numb. And to top it all off, one of the lake's sub-stages places you in a maze packed with obstacles and creatures. You have to guess your way through the gauntlet and hope you're not putting yourself through scores of blood-boiling challenges before reaching a dead end. 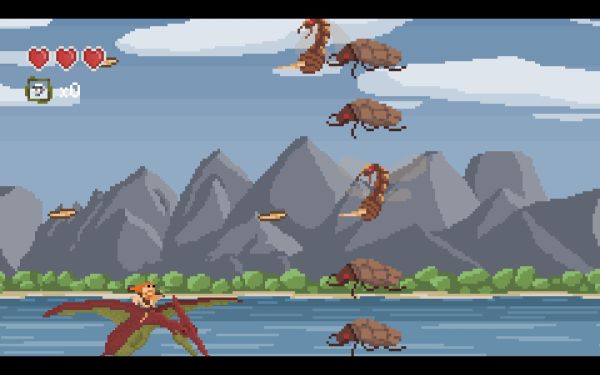 Most of these examples are mere annoyances. Caveman's real flaw is the inclusion of erratic enemy movement patterns. Critters often walk consistent, predictable paths. However, there are some that wander around, sometimes running back and forth in a tight, inconvenient location. For instance, there's one short cliff you need to descend. The land below holds a couple of flightless birds who randomly mill about, and one of them loves to bop to and fro just below you. Since there's an enormous wall in front of you, you can't just leap over him. You either have to wait forever for him to get bored of twitching and move on, or collide with him and accept the damage.

The worst is during the penultimate boss battle, where you square off against a Mastodon in an enclosed valley setting. The wall closest to you arbitrarily spawns the pesky birds from earlier. Additionally, the boss himself tromps around inconsistently. He typically keeps to his side of the arena, but sometimes decides you don't need all of your hit points. That's when he wanders to your corner and boxes you in, either allowing a bird materialize on top of you or crushing you against the wall. If you're lucky, you could double jump and perform a mid-air dash over him. More often than not, though, he backs up when you're in the middle of pulling this off and you collide with him anyway. 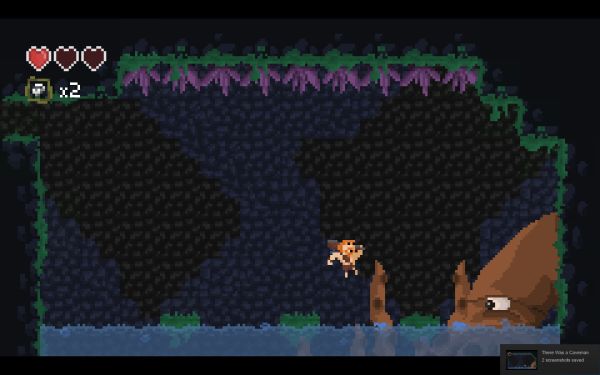 All the same, I can't call Caveman a poorly made game. Sure, there are some irksome moments, but they hardly diminish the title's overall appeal to genre fans. There are enough tricky sequences and wisely designed set pieces to fill a quiet afternoon. I enjoyed scaling the side of a hill by hopping on oddly positioned platforms. Another sequence inside the dinosaur's guts involved ascending a tall shaft filled with turret-like skull monsters. Timing and careful planning were key to survive there. Personally, my favorite sections popped up in the afterlife stage, where Mega Man-esque appearing/vanishing platforms lie.

There Was A Caveman is a functional platformer. It's not the next Super Meat Boy and it's no replacement for Castlevania, but at least it's a decent trip. I only recommend this adventure to genre die-hards who have powered through everything else on Steam, however. Otherwise, there are mountains of other superior titles to check out first.

If you enjoyed this There Was A Caveman review, you're encouraged to discuss it with the author and with other members of the site's community. If you don't already have an HonestGamers account, you can sign up for one in a snap. Thank you for reading!

© 1998-2021 HonestGamers
None of the material contained within this site may be reproduced in any conceivable fashion without permission from the author(s) of said material. This site is not sponsored or endorsed by Nintendo, Sega, Sony, Microsoft, or any other such party. There Was A Caveman is a registered trademark of its copyright holder. This site makes no claim to There Was A Caveman, its characters, screenshots, artwork, music, or any intellectual property contained within. Opinions expressed on this site do not necessarily represent the opinion of site staff or sponsors. Staff and freelance reviews are typically written based on time spent with a retail review copy or review key for the game that is provided by its publisher.