Wasteland 2 is a post-apocalyptic RPG developed by Brian Fargo, the same man who brought us the Fallout series. It has a bit of an unusual history to it. The original Wasteland was released way back in 1988, then Electronic Arts decided not to follow it up with a sequel, so Fargo moved on to Interplay where he developed Fallout, which was intended to be the spiritual successor to Wasteland. Fallout 1 and 2 even contained some veiled references to Wasteland, so the fact that we are seeing an official sequel to Wasteland twenty-five years after the fact is a bit strange. Nevertheless, when Fargo pitched his Kickstarter campaign, nostalgic nerds far and wide opened their wallets in support. The project raised an impressive $3 million, and it was even on Kickstarter's top ten list of most successful projects for a while, which is no small feat.

Anyway, Wasteland 2 is the continuing story of the Desert Rangers, a group of well armed but good-natured folk who have taken it upon themselves to restore law and order to post-apocalyptic Arizona. The atomic war wiped out damn near everything, including any semblance of a stable society, and the Rangers are just trying to make sure that innocent folk don't get taken advantage of. They have their work cut out for them, though, as raiders, mutants, killer robots and cyborgs are out there preying on the remainder of humanity, and they won't go down without a fight.

This game has an impressive roleplaying aspect to it. As your Rangers embark upon various quests, you will find that you have a fair bit of agency over how you conduct their behaviour, whether as good Samaritans or Dirty Harries. The choices you make will dynamically affect the fate of the settlements throughout the game, and sometimes a perfect solution just isn't possible. The best example of this occurs early in the game when you receive distress calls from two different settlements at the same time. The Rangers, who have limited resources, are only able to respond to one. Whichever settlement you decide to help will be saved, while the other will be utterly annihilated. That pretty much describes the game's tone, right there. 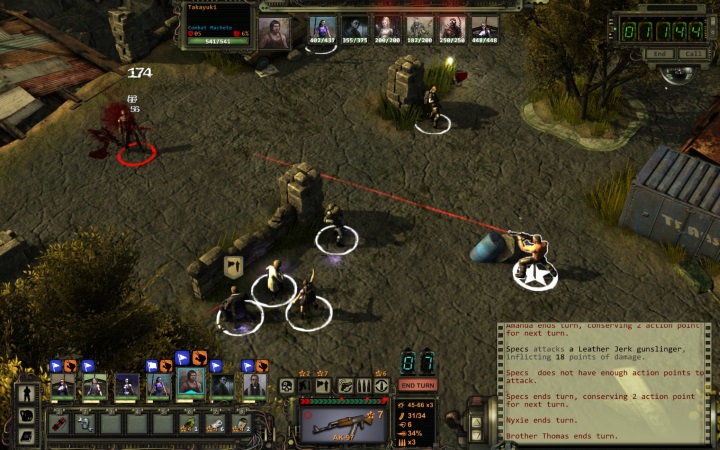 While Wasteland 2 affords the player less avenues of choice than the Fallout games do, it is still very open-ended in its own right. The story is about a bunch of lawmen after all, so it's not quite as easy to play a ruthless villain as you might like. However, most NPCs in the gameworld can be killed; hell, entire settlements can be wiped out with some effort. Ranger HQ won't like it, and your followers might up and quit on you, but you ultimately get to decide who is deserving of mercy and who gets the gun. All in all, there are very few restrictions on the choices you can make, and RPG fans will definitely appreciate this.

While the tone of the game is quite dark, the writing isn't all doom and gloom. It has quite a bit of humour thrown into the mix, with plenty of references to old movies, television, games, toys, pop culture - everything. I felt that this was appropriate, considering that scavengers in a post-apocalyptic world may, in fact, dig up the remains of the modern world and wonder, for instance, what the hell a troll doll was for. Some references are laugh-out-loud funny, such as when I found the famed Atari E.T. The Extra Terrestrial landfill site, and watched as my Rangers dug up thousands of useless, valueless cartridges that they couldn't sell to a merchant if they tried. On the other hand, some of the other references were so complex and opaque that even the combined might of the internet had trouble figuring them out. While some of these left me scratching me head, they ultimately they didn't interfere with my enjoyment of the game. The main storyline is robust and focused enough to stand on its own.

The combat is also very well designed. It differs from Fallout in the sense that you control a squad of up to seven Rangers rather than a lone wanderer. It is still turn-based, but it has a bit of an XCOM flavour to it. You can order your Rangers to take cover, flank enemies to good effect, or tell them to "Ambush", which works exactly like the Overwatch feature in XCOM. All of this is slick and easy to manage, though it does require a bit of micromanagement when switching weapons, reloading, crouching, standing up, using skills, attempting headshots, et cetera. 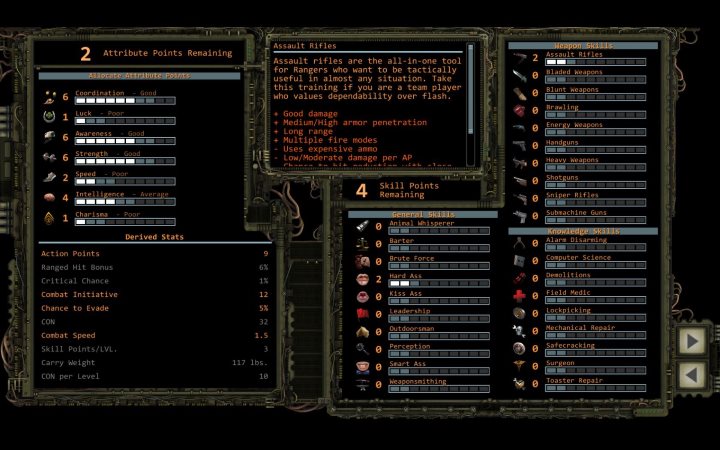 Beyond that, creating a team that synergizes well in the field is half the fun of Wasteland 2, and the character creation system is rather complex and satisfying in this regard. Your Rangers' statistics are divided between their physical attributes and their skills, and there are a multitude of combinations possible between the two. Want to make a brawny melee fighter who is capable of sprinting across the battlefield with ease? Sure can. How about a sluggish, eagle-eyed marksman? Of course. Perhaps you'd like to make a scrawny computer nerd who, for some reason, has a knack for taming badgers and bears? Why not! You even get to write a small dossier for your characters, and you can print off their character sheets if you like. I don't know why you would, as I'm pretty sure there's no such thing as a Wasteland 2 tabletop game, but the option is there nonetheless. As I said, this is a game for nerds.

In terms of pacing, Wasteland 2 is one of those rare games that saves the best for last. The first part of the game, taking place entirely in Arizona, is interesting enough, but the California portion of the game is truly the main attraction. After crossing over the Rockies via helicopter in search of a missing Ranger team, you find yourself in the ruins of Los Angeles, which is slowly returning to nature as a teeming jungle. Water conservation, which was a constant problem in Arizona, no longer applies, but now you are beset on all sides by a myriad of different factions. These include a cult of evil cyborgs, a group of killer robots, a militant sect of fundamentalist Christians, free-lovin' hippies from Hollywood, and even more raiders. There's also a group called the "Mannerites", who seek to impose civility and good manners upon the wasteland via force, if necessary. Listening to the competing radio chatter of these loonies, while responding to the various problems they pose, is the absolute highlight of the game. California is off the hook.

Another high point lies in this game's sound and music. The soundtrack was done by Mark Morgan, the same man who composed the music for the first two Fallout games. The moody, desolate tracks fit the tone of the game perfectly. This game also likes to remind you that it supports "Razer Surround", a free software that mimics surround sound out of regular binaural headphones. I happen to own a Razer Kraken headset, which is supposedly perfect for it, so I tried it out just for the hell of it. I wasn't expecting a huge difference, but damn, was I ever impressed. I don't know how it works, but it truly does feel like surround sound. Every gunshot and footstep is represented authentically in 3D space. I'm usually wary of software like this, as it can cause compatibility problems with operating systems and the like, but this is definitely the best way to go if you want to be completely immersed in your experience with Wasteland 2. 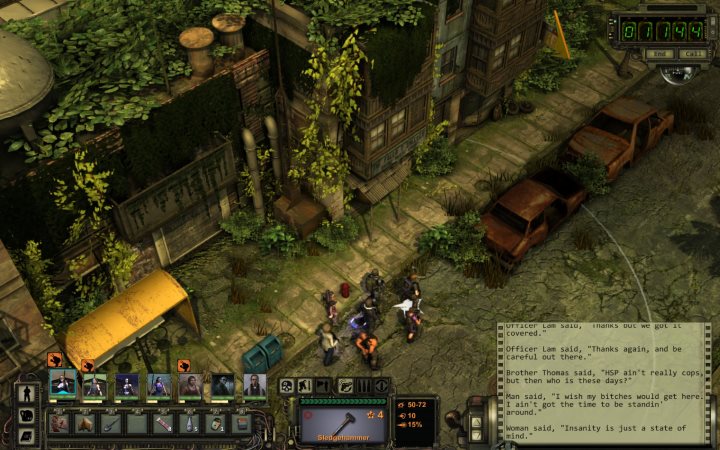 While this game has many strengths, it is also not without its flaws. Foremostly, its graphics look very last-gen. The character models aren't particularly detailed, and you will notice some quirks with the animations that will remind you that this is, in fact, an indie game. The Arizona section of the game also isn't very impressive to look at - perhaps it's hard to make sand and desert look cool - but thankfully, the visual quality improves significantly when you get to the California section of the game. Every leaf, vine and piece of rubble in the Los Angeles sprawl is carefully rendered with immaculate detail.

It should also be noted that this game runs on the Unity engine, which means that it has its share of clunk and bugs. This is most noticeable in the sudden lurch from real-time exploration to turn-based combat, which always seems to drop your Rangers onto exposed squares that are exactly where you don't want them to be. Also, for some reason the enemies always seem to take their turns first. This might come down to an initiative check or something, but if so, the Rangers always seem to be at a disadvantage. Quest lines can also become broken if you act crazy or kill the wrong NPC at the wrong time, requiring loading a previous save. I also experienced occasional crashes and performance issues in certain areas. I imagine this is also Unity's fault, as Satellite Reign had the same problem.

However, these minor faults aside, Wasteland 2 is a highly ambitious piece of work that came to fruition in all of the ways that count. It's clear that the surplus dollars Fargo received were sunk straight into the game instead of being squandered (he originally asked for $900,000). The game also has remarkable value for its purchase price, being packed with a myriad of goodies including a copy of the soundtrack, PDF art books, and the "Director's Cut", which overhauls the entire game by improving the visuals, fixing bugs and reworking some of the game's mechanics. I haven't played the Director's Cut yet, but I imagine I will in a few years' time before Wasteland 3 finally drops. In the meantime, I highly recommend Wasteland 2 to RPG fans of every stripe, especially if they were fans of Fallout 1 and 2.

If you enjoyed this Wasteland 2 review, you're encouraged to discuss it with the author and with other members of the site's community. If you don't already have an HonestGamers account, you can sign up for one in a snap. Thank you for reading!

© 1998 - 2022 HonestGamers
None of the material contained within this site may be reproduced in any conceivable fashion without permission from the author(s) of said material. This site is not sponsored or endorsed by Nintendo, Sega, Sony, Microsoft, or any other such party. Wasteland 2 is a registered trademark of its copyright holder. This site makes no claim to Wasteland 2, its characters, screenshots, artwork, music, or any intellectual property contained within. Opinions expressed on this site do not necessarily represent the opinion of site staff or sponsors. Staff and freelance reviews are typically written based on time spent with a retail review copy or review key for the game that is provided by its publisher.