Solitaire was always a fun little time waster that was included in Microsoft Windows. It changed a bit over the years  each new upgrade of Windows brought updated graphics and card backgrounds, but the core game always remained the same. But Windows 7 changed the way the scoring worked, as well as the speed of the game. No big deal, most of us continued playing it when we couldnt find the energy to do much else. Windows 10 required you to log into a Microsoft account to play it online nope. I tried it once and it was awful. 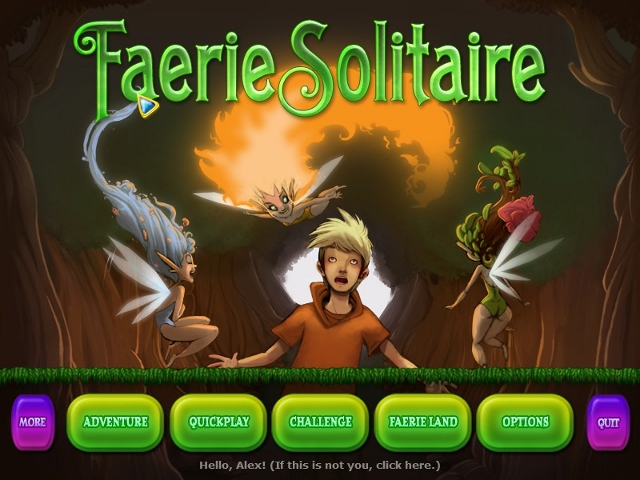 But thankfully by then, Id found an addictive alternative. Faerie Solitaire is a new twist on a familiar setup. A pattern of cards is placed on the table, some overlapping others. Some cards are turned face down so you cant see what they are until you play the card on top of it. There are 8 chapters in the game. Each chapter has 5 levels. Each level has 9 stages. Theres also some bonus challenge levels. If I have my math right, there are 450 different stages for you to play and solve, although the card valued themselves are randomised, so each time you load it up, itll be a little different. Even if youve played a stage ten times, you wont be able to cheat by knowing where specific cards are.

You have a deck of cards to click through, one at a time. You get one pass through the cards. You need a card that is either one card before or after a card that is on the board. For example, if theres a 5 on the board, you will need a 4 or a 6 in your hand to play it. Once you take the 5, that becomes your card, so you can then remove a 4 or a 6 from the board if you have it. The game rewards strategic combo making. When theres more than one choice for a card you can play, it helps to see whats underneath it, ideally you want a card that lets you continue your combo. Ive had combos where Ive bounced between the same few numbers, 4 5 4 5 4 5 6 7 6 7 8 9, etc. The K connects to the A and you can go back around again. Once theres no more cards in your combo, you draw the next card from the deck and go from there. 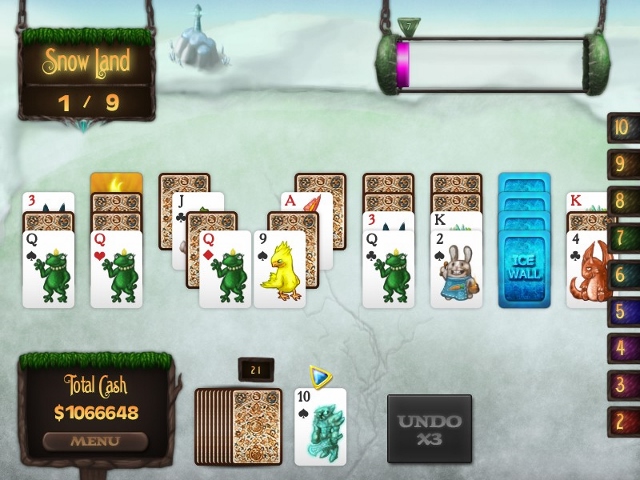 There are RPG elements, too. At the end of each stage, you collect money based on how long the level took, what your best combo was, and you can use that to unlock things. You can unlock a zapper that lets you destroy a card once you charge it up (by not 5 using cards in your hand, it happens a lot). You can make it so more cards are turned face-up. Theres a few things that can improve the odds for you, which will help you in the later levels.

Sometimes you will reach a card in the deck that will fly off to the side of the screen. You can then use this card any time you like, if you get stuck. These cards will stay with you until you use them, so you can earn them in one level and use them in another. They only go from 2-10, though, so they wont get you out of every situation if youre unlucky to be stuck with a Queen or King once youve exhausted all your cards.

Once you run out of cards in the deck, you will end the stage. If you cleared all the cards on the table, that counts as a perfect. If not, well, it doesnt really matter. Youll feel a little inadequate, but its going to happen. A lot of it come down to luck  you gotta play the cards youre dealt. The only way to officially clear each level is to complete the various objectives. These usually consist of achieving a combo of a specified amount, or winning enough money, completing the level in a short enough time, or having enough perfect scores in that stage. Most of them are easy.

That is basically it for the technical side of things. Faerie Solitaire has a story, which youll probably ignore. It has something to do with faeries, I think. I usually skipped it to get to the next level quicker. The artwork is nice, though. The backgrounds have a charming aesthetic.

Faerie Solitaire is big on charm. Sometimes when you clear a stack, youll find an item to collect: wood, stone or magic. Youll also find eggs. If you hatch the egg, itll spawn some adorable creature, and itll gradually level up as you play and then you can use the aforementioned items to evolve it. They dont do anything. Theyre just there to look cute in your collection.

Its all about the cards. Ive completed the adventure and challenge modes maybe three times over, just because they are so fun. Im aiming for a perfect on each level. No easy feat. Plus, theres still some eggs I havent gotten yet.

Faerie Solitaires asking price is $10. Its a little steep, in my opinion. I got it for much less during one of Steams many sales. I recommend waiting for one of those. Since getting this, I havent missed Windows Solitaire at all. Well, I do miss the cascading card celebration thing when you win.

If you enjoyed this Faerie Solitaire review, you're encouraged to discuss it with the author and with other members of the site's community. If you don't already have an HonestGamers account, you can sign up for one in a snap. Thank you for reading!

© 1998-2021 HonestGamers
None of the material contained within this site may be reproduced in any conceivable fashion without permission from the author(s) of said material. This site is not sponsored or endorsed by Nintendo, Sega, Sony, Microsoft, or any other such party. Faerie Solitaire is a registered trademark of its copyright holder. This site makes no claim to Faerie Solitaire, its characters, screenshots, artwork, music, or any intellectual property contained within. Opinions expressed on this site do not necessarily represent the opinion of site staff or sponsors. Staff and freelance reviews are typically written based on time spent with a retail review copy or review key for the game that is provided by its publisher.