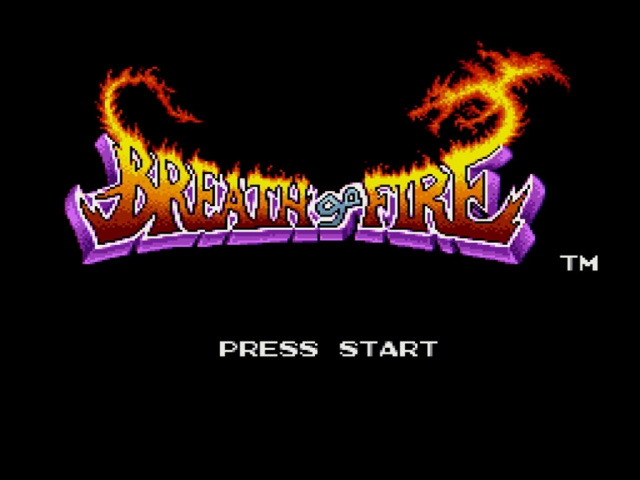 Breath of Fire begins with a roar. The right hand of a despotic ruler invades a town of peaceful dragons, trouncing them without breaking a sweat. Those who remain hole up in a crumbling house, where their most promising heroine, Sara, turns them to stone for their protection. She then challenges Jade to a duel, only to disappear along with him after the bout. Desperate, the light dragons' hope now rests with Sara's brother, the blue-haired Ryu.

Not long after embarking on his mission, Ryu arrives at an imperiled kingdom. A monster forced the king out of his castle, and his majesty looks to Ryu to exterminate the vermin. Minute dialogue passes between them, and Ryu silently agrees to take up the task. From there, you scour the simple dungeon that comprises the castle before coming to a throne room, where you face the insidious villain.......Frog. Incidentally, Frog also happens to be a frog. You're only an hour or so into the game and it's already anticlimactic.

Later on, you power through additional demonic entities with truly hair-raising names: General, Cloud, Squid, Wizard, Gremlin, etc. Unsurprisingly, these fights fail to make use of the Breath of Fire's commendably simple, menu-based combat system. The aforementioned bosses seldom resort to tricky tactics or specialized AI routines designed to throw a wrench into your cogs. As for your own strategy, merely maximizing damage output and healing when necessary should suffice for almost any boss brawl. Ultimately, most of Breath of Fire's boss encounters are straightforward and dull.

Let's be fair, though. The entire first half of Breath of Fire's campaign is forgettable, and not just the boss battles. Before my recent replay of this title, I attempted to recall its storyline and key events. Try as I might, though, I couldn't drudge up a single memory of anything before entering the town Gust. All I could remember was an evil wizard plaguing bird people, a burg full of zombies, searching for an elusive thief king who happened to be raiding a crypt... Most of the details behind these segments slipped my mind, mainly because they weren't worth committing to memory.

Any of the above plot devices could generate decent melodrama, given that the characters involved are lively and memorable. Capcom nailed the latter of those qualities by crafting an entourage of cartoony, anthropomorphic adventurers, each one representing a standard RPG class. For instance, the wolf Bo serves as a ranger and the serpentine Bleu is your everyday mage.

Sadly, though, the tale doesn't utilize the cast to their fullest. During Bo's introduction, he breaks through a wall and makes an impressive deus ex machina, then proceeds to do nothing worthwhile for the rest of the story. You spend a whole segment trying to bolster the mole Mogu's courage in the hopes of recruiting him. After his chapter ends, he rarely contributes to the plot. In fact, the game's antagonists add more to the narrative than any of your cohorts.

The initial half of Breath of Fire is akin to a mediocre first season of a television series. It isn't terrible, but it also isn't entertaining enough to justify sitting through season two. However, that's where the program takes off. After hours of fighting stock enemies and bosses that are giant animals disguised as humans, you witness Jade and his master Zog formulate a sinister scheme. Jade later muses to himself about his villainous plans to deal with Ryu, and that's when the game's equivalent to Final Fantasy's Four Fiends arrive.

The latter portion of the campaign boasts a slew of memorable story events. For example, one section contains a village full of mysteriously paralyzed citizens. East of the hamlet lies a tower that can alter time, where you'll find an evildoer named Cerl. As it turns out, Cerl used dwell within the time-frozen community. When the citizens discovered she wasn't human, they ran her out of town. Her only friend, a man named Alan, failed to stand by her and now regrets allowing her to align with the forces of darkness.

Many late game dungeons and boss encounters also step up. During one scene, you enter a dream world to war with a pint-sized Freddy Krueger wanna-be named Mote. His hovel features a pitch black void with a crystalline walkway that occasionally rotates in an effort to throw you off. It's nerve racking, but also a welcome change of pace from the first half's banal, empty corridors. One stage before that also sports a series of switches that render the walls invisible, and another set of contrary devices that restore the walls. Though I groan during these sections, they beat tedious walks through vanilla levels.

The conflict against Mote also breaks the game's spree of straightforward bosses. At the beginning of the fight, he appears as a mess of blurry pixels. His magic resistance during this phase is off the charts, but his physical defense is rather low. With successive blows, he slowly sharpens until he's visible--and dear god, he looks like the head of a dong crossed with an octopus. That's when his defense ratings switch, trading his physical resilience for stauncher resistance. On top of that, he unleashes a powerful multi-target fire spell. You could send your own magical reprisal, but that causes him to blur a little, thereby forcing you to resort to physical strikes again.

Unfortunately, Breath of Fire's one-eighty doesn't alleviate its most enduring issue. Each quest line presents an ultimate goal for you to attain. However, crossing the finish usually involves enacting a subplot that leads to another subplot that leads to a location that can only be accessed with a hidden event item... I think I can hear you yawning already. I'll give you an example: early on, you must restore a town's water supply because the empire blocked it to pressure the citizens into support them. You accomplish this by activating a giant robot via key, which is atop a tower called Agua. However, you can't access Agua because you need a special tablet. You gain that by dealing with Romero's zombie problem, but such a feat requires sacred water from a nearby cave. Oh, and you have to procure another event item to carry the water that the game doesn't tell you about...

This sort of situation arises numerous times throughout your journey. You enter a dungeon and you can't advance any further because you need a particular object or ally. Sometimes it's a broken elevator whose parts are god-knows-where, other occasions it's an invincible moth monster who can only be defeated when a newly recruited party member finds his courage--and yes, encouraging the young man requires plunging into another dungeon. Argh!

Capcom obviously stepped out of their comfort zone with Breath of Fire. The result is an RPG with a weak beginning, but a solid--albeit flawed--second half. It's as if Capcom was getting the hang of RPG development partway into the project. Further titles confirm that, as Breath of Fire II through IV are quality franchise entries.

If you enjoyed this Breath of Fire review, you're encouraged to discuss it with the author and with other members of the site's community. If you don't already have an HonestGamers account, you can sign up for one in a snap. Thank you for reading!

© 1998 - 2022 HonestGamers
None of the material contained within this site may be reproduced in any conceivable fashion without permission from the author(s) of said material. This site is not sponsored or endorsed by Nintendo, Sega, Sony, Microsoft, or any other such party. Breath of Fire is a registered trademark of its copyright holder. This site makes no claim to Breath of Fire, its characters, screenshots, artwork, music, or any intellectual property contained within. Opinions expressed on this site do not necessarily represent the opinion of site staff or sponsors. Staff and freelance reviews are typically written based on time spent with a retail review copy or review key for the game that is provided by its publisher.