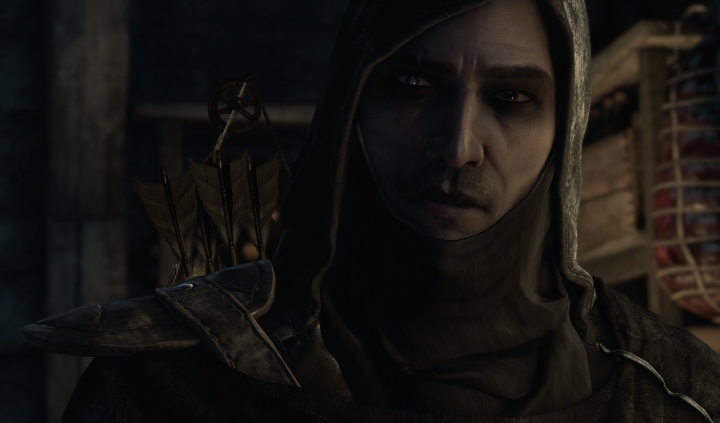 Thief is the long-awaited reboot of the critically acclaimed Thief series. It chronicles the travails of Garrett, master thief, as he prowls about a dystopian steampunk city, steals stuff, beats up the City Watch and generally acts like a badass. Oh, and there's also a vague storyline involving a plague and a rebellion against a tyrannical Baron or some such. Still with me so far? Good. If I sound bored, that's because I am. Thief is not a very enjoyable game and there are a lot of reasons for this.

It's a damn shame, too, because I really wanted to like this game. The first game in the series, Thief: The Dark Project, is my favourite game of all time. It also happens to be the original stealth game, the one that created the entire genre in the first place. Thus, Thief had some pretty big shoes to fill right out of the gate, but when I heard it was being developed by powerhouse developers Square Enix and Eidos Montreal, I had really high hopes for it. After all, these are the folks that brought us Deus Ex: Human Revolution. How could they possibly go wrong?

Well, now that I've finally played it, it's pretty easy to explain. For some reason they decided to take everything that was good about the previous games and remove all of it, piecemeal. The large, open-ended missions of the previous games are gone, instead replaced by tiny, linear spaces where only one or two approaches are possible. Garrett no longer has his sword and dagger; instead he has a wimpy club. Cool factions like the Hammerites, Pagans and Keepers have been removed entirely or have had their roles reduced to mere footnotes within Thief's extremely thin storyline.

Granted, they have added some cool things too, or at least things that sound good on paper. Garrett has a new mystical "focus mode" which allows him to see in the dark and identify things in the environment that he can use to his advantage. He also has an entirely new selection of thief tools, including a wrench, crowbar, wire cutters and razorblade, which can be used to open grates, pry open windows, disarm traps and steal paintings respectively. These tools have nice tactile animations where Garrett works his thiefy magic with his hands. Garrett is also much more mobile, possessing the ability to vault over railings, climb walls, slide, and "swoop" between shadows. He kinda feels like a more grabby Batman. 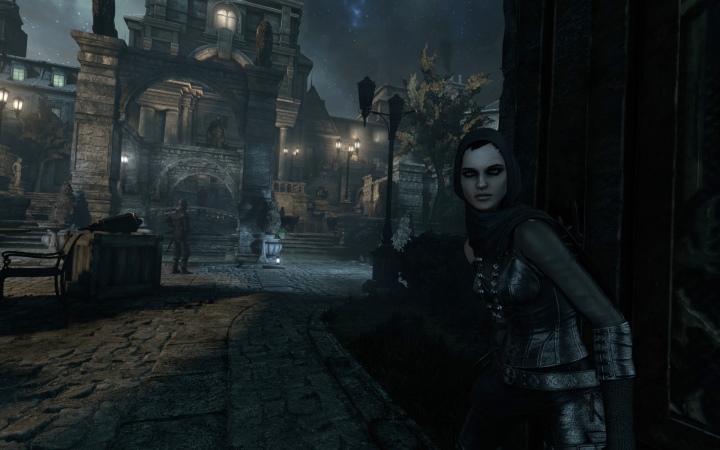 What he cannot do, however, is jump, and since only certain objects can be vaulted onto, you will find yourself scratching your head as to why certain surfaces can be climbed while others cannot. This game also likes to coddle you to make sure that you can't hurt yourself by doing something silly, like say, falling off a ledge. Therefore, all high ledges in this game are automatically blocked off for you unless you press a specific key to jump down, and any ledges that are high enough to kill you instantly are blocked off by invisible barriers altogether. Maneuvers like tightrope walking, which were terrifying (and satisfying) in the previous games are now trivialized, as Garrett can literally sprint across them without fear. The entire game feels like a padded room.

This is made worse by the fact that Garrett is grossly overpowered. He can fight any enemy, or even groups of enemies, and probably win. Those silly watchmen with their broadswords and crossbows are no match for Garrett's wimpy little club; all it takes is a few well-timed hits and they go down like sacks of potatoes. Even if you lack good timing, don't worry - Garrett has an overpowered dodge ability that lets him dart out of the enemies' reach with ease.

You can also purchase upgrades for your club to increase its damage further. And armor upgrades to make Garrett more resilient! After a few of these, it got to the point where I didn't bother sneaking around the city at all. As long as I wasn't up against snipers in high positions, I found that I could boldly approach any group of enemies, beat them all to death, and get away with only a few scratches. Even if they did manage to do some serious damage to me, it hardly mattered, as I could eat a single piece of food and restore half my health bar.

Garrett's arsenal of ranged weaponry is also equally overpowered, though this is in part due to the idiotic enemy AI. I will use the example of when I found myself faced with a courtyard full of guards. These were the kind of helmeted, heavily-armored badasses that you surely would not want to mess with in a stealth game, and there were at least half a dozen of them. I hid in the shadows, not even bothering to pick a well-secluded spot, and shot my arrows at them. I was only about six feet away from some of them when I did this, but somehow they never managed to figure out where I was. They didn't run for help; they did not try to hit an alarm. I decimated all of them without incident, then I strolled through the courtyard like I owned the place.

I didn't even bother to hide the bodies. Why would I? Even if an NPC found them and raised a fuss, they wouldn't stand a chance against me. It's unlikely that they would anyway, as they seem to have a hard time deciding whether to freak out about incriminating evidence or not. 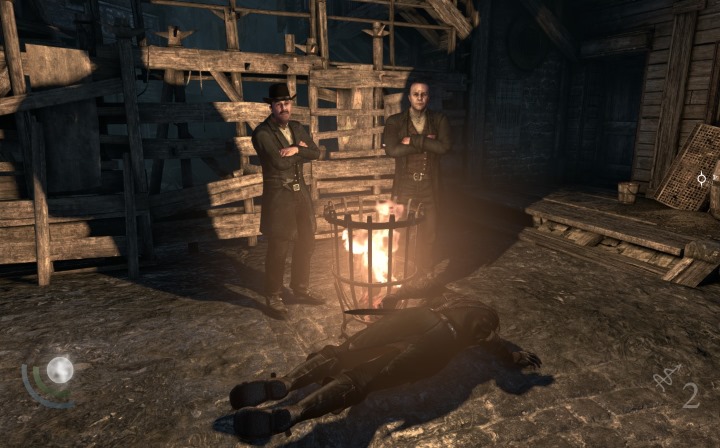 These folks are more or less okay with the fact that I just dumped a body in front of them.

Thus, Thief is a stealth game where stealth hardly matters. I don't know if this is the result of deliberate planning or just sheer laziness, but it nevertheless ruins the whole experience. This laxity is in sharp contrast to the previous titles, where if you pissed off even two guards at the same time it was probably game over - even if you were playing on the easiest difficulty. The whole point of a stealth game is to rely on the shadows, using only your wits and tools to stay alive, but none of that matters here. This lack of tension sucks the life out of Thief, and its dark and ominous scene-setting is rendered trivial or even ridiculous as a result.

Speaking of which, the storytelling in this game is absolutely awful. The dialogue is so opaque and cryptic that I walked away from some cutscenes wondering what the hell the characters were even talking about. And that's if you can even hear them. The sound design is so bad that the characters' voices will periodically fade out and become inaudible, seemingly at random. It's like they simply forgot to do an edit pass on the audio altogether and left the raw recordings as is. For this reason, turning subtitles on is absolutely essential if you want to have any sense of what's going on at all. And when you do, you will find that there are apparently ambient conversations happening all over the city that you cannot hear, and despite your best efforts, will not be able to locate the source of. Believe me, I tried.

There are also some moments of laughably inconsistent storytelling that are truly special. An example of this is when the aforementioned rebellion against the evil Baron comes to a head. A group of revolutionaries (called the "Graven") gather at the gates of the Baron's manor to confront a group of guards stationed there. They chant slogans like: "We don't answer to the Baron's dogs! Spit on their laws! The Watch will burn and the city will blacken!"

Cool, I thought. So, trying to be the helpful sort, I climbed up onto a vantage point and rained fire arrows down upon the guards, stunning and damaging them. Then I jumped down and finished them all off with my club. I turned to the crowd, expecting a heroes' welcome, but instead they all scattered like mice, screaming: "Help! Guards! There's an assailant!" Hmph. Fickle revolutionaries, indeed. 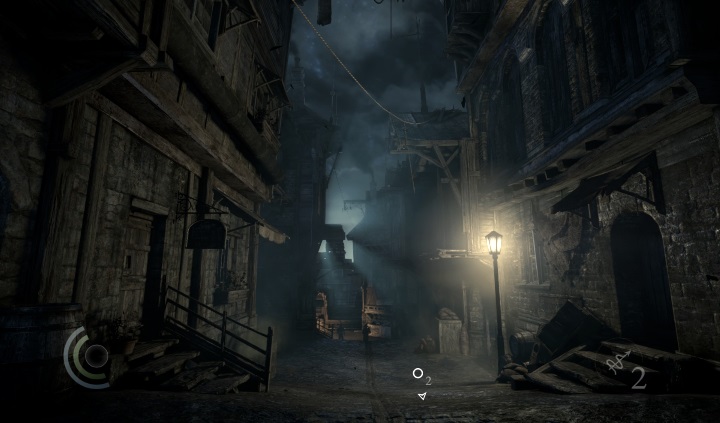 Another example is when the revolutionaries manage to actually overthrow the City Watch and start patrolling the streets on their own. In a brief monologue, Garrett explains how the Graven are out for blood and will be looking for anyone who "isn't one of them". Nevermind the fact that Garrett is actually a good buddy of the revolutionaries' leader at this point, a man who probably would've told his men to hold off on sticking a sword into Garrett's face, but nevertheless the scary Graven soldiers with their sinister red face-paint and black armor never seem to get the memo. They chase down Garrett on first sight like a pack of wild dogs while curiously ignoring the clearly unaffiliated citizens who continue to wander the streets.

There is only one effective area in the entire game, and that is the Moira Asylum level. This haunted, dilapidated Alcatraz for the mentally ill has enough creepy atmosphere and jump scares to keep you on the edge of your seat while providing you with the challenge that has been absent during the rest of the game. Effective and poignant as this level may be, it still comes far too late in the game to save it. Most people will have already checked out or uninstalled the game long before they reach it.

Thief's only other redeeming quality is its gorgeous graphics. Every nook and cranny of the city feels hand-crafted and unique, and is rendered with beautiful high-definition textures. Yet, for some reason it all begins to look the same after a while. Maybe this is because the entire city is cast in the same shades of blue and brown, or maybe it's because almost every single facade in the city is composed of slightly different, yet similar patterns of the same rotting crossbeams. Or maybe it's because the nondescript piles of crates, barrels and sacks that you see everywhere serve no purpose other than to act as thoughtless filler. There are a few nicer-looking locations in this game, but they are few and far in-between and not very memorable.

The final verdict is that Thief is a disaster. Do yourself a favor and don't ever play this game. Don't even buy it on sale. Your money would be better spent on a cup of coffee.

If you enjoyed this Thief review, you're encouraged to discuss it with the author and with other members of the site's community. If you don't already have an HonestGamers account, you can sign up for one in a snap. Thank you for reading!

© 1998-2021 HonestGamers
None of the material contained within this site may be reproduced in any conceivable fashion without permission from the author(s) of said material. This site is not sponsored or endorsed by Nintendo, Sega, Sony, Microsoft, or any other such party. Thief is a registered trademark of its copyright holder. This site makes no claim to Thief, its characters, screenshots, artwork, music, or any intellectual property contained within. Opinions expressed on this site do not necessarily represent the opinion of site staff or sponsors. Staff and freelance reviews are typically written based on time spent with a retail review copy or review key for the game that is provided by its publisher.