While the Sega CD probably wasn't the best allocation of resources the Sega people devised when they were a player in the console wars, it did have its fair share of killer games, with the problem being there was too little quality content to justify paying big money when better systems were right around the corner. I mean, $300 for a glorified add-on to a 16-bit system? Things like that are why I've gotten into the habit of waiting for a system to be around for a few years before I decide its worth my money! And, let's keep things real: Unless you have a particular love of grainy FMV, the Sega CD probably would not be worth that price.

This is probably why I got introduced to the Lunar series when its first game, Lunar: The Silver Star was re-released on the PlayStation. For a RPG addict like myself, this (and its sequel) would have been the killer apps for the Sega CD. Of course, playing the remake before the original makes reviewing this version a challenge, as I'm finding myself having to constantly fight the urge to directly compare it to a more modern version released on a more powerful system. In other words, fasten your seat belts -- I have no idea where this ride is going.

By today's standards, Lunar: The Silver Star could just as easily be called Lunar: All The Tropes. Protagonist Alex is an idealistic young man who dreams of being a hero on the same level of his idol, the legendary Dragonmaster Dyne, while living in an isolated village with pals Ramus and Luna and his talking, flying cat-like pet, Nall. Upon visiting the elderly dragon Quark in a nearby cave, his thirst for adventure grows, so he and Ramus head across the sea to a large city. Well, Ramus is technically only along for the ride because the dragon was willing to hand over a diamond so valuable the local shops had no clue of its worth; but Alex has more lofty goals. Goals that lead to really cool things such as being able to meet Dyne's former team of heroes: Mel, Lemia and Ghaleon; as well as learning magic from the pros in the floating city of Vane.

And some things that aren't quite so cool, such as inadvertently leading a villain to Quark, only to helplessly watch as the dragon is dispatched and the villain proclaims himself as THE MAGIC EMPEROR. Mr. Emperor proceeds to start enslaving the world, starting with the fine people of Alex's hometown just in case his "evil overlord" armor and murder of a friendly dragon weren't enough clues that the dude's bad news. Fortunately, Alex has gained a number of friends, including Mel's daughter, Jessica; Lemia's daughter, Mia and their respective prospective boyfriends, Kyle and Nash. Friends that will follow him to the ends of the earth to stop the Magic Emperor's evil plans, as well as rescue Luna and a number of other young women who were kidnapped seemingly solely due to their singing talents. Of course, you know there has to be a reason those girls were captured -- and it likely isn't because the Emperor loves being lulled to sleep by angelic voices! 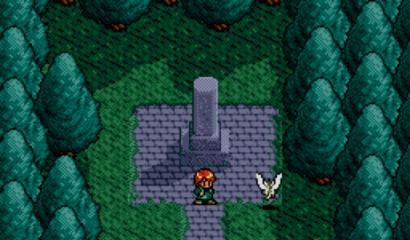 By today's standards, a lot of this can easily be filed into the "seen it all before" category, but in the early 1990s, this was a step above the average RPG. The simplistic cartoon drawings and brief snippets of voice acting weren't to be found in any of the Final Fantasy or Dragon Quest games of the time and the CD technology also allowed for a very enjoyable soundtrack. A lot of humor was inserted into the dialogue to keep things light-heartedsometimes to the detriment of the story, such as when random slaves are joking about if the Magic Emperor really is bald, while their cohorts are describing atrocities such as how the weapons they are forced to make are then tested on them.

Something that wasn't detrimental to The Silver Star was its battle system, which was more involving than the average RPG of its time. Your heroes and monsters are all displayed on the screen. Usually, it starts like a typical Final Fantasy battle, with your party on the right side and the enemies on the left. However, sometimes you'll start in the middle of the screen with foes arranged around your team. While spells may be cast regardless of your proximity to monsters, in order to use melee attacks, you'll have to hope your character has enough energy to walk up to the monster AND swing his or her weapon. Alex and Kyle are buff fighter-types, who can walk half the screen and still whack foes a time or two. Mia, on the other hand, is a pure magic-using specialist who is capable of moving roughly one step before needing to catch her breath. Nash and Jessica are in between those extremes, but he can use bows to enhance his attack range, while she's the party's best healer.

Because of this, you will not want to fall into the "tap the attack button until the fight's over" trap that us RPG veterans can find ourselves in after our millionth Dragon Quest clone. The computer isn't always nice enough to automatically pick the closest enemy to any of your guys, so not paying attention can cause you to watch Alex and Kyle waste turns while trying to find a way through four foes to reach the one you inadvertently targeted. A lot of the time, they'll at least whack whatever's closest after realizing they're not getting through to their objective, but counting on that to happen is a good way to burn through healing spells -- especially in the early and late stages of the game, when things are toughest.

I expected the late-game dungeons to have their challenges. You're fighting the game's toughest monsters, while going through some of its most convoluted dungeons. Having troubles in the early going? Not so expected. I mean, it's not particularly troublesome getting off your island and to the main continent, but when you're there, you'll be assailed from all directions. The best equipment at the local shops is really expensive in comparison to the money monsters drop, those monsters are more powerful than what you'd been fighting, you have a one- or two-person party until you've reached Vane and every once in a while, you'll find yourself against foes only vulnerable to magic. I found myself spending an eternity camped out in front of a shrine where I could regain my health and (eventually) magic and fighting the local wildlife just to survive this portion of the game. Afterwards, I cruised through most of the rest thanks to having a larger, more well-rounded party, as well as a ton of spells to throw around when necessary. While late-game dungeons had their share of tough and durable foes, I could easily heal after every few battles and, if needed, I had plenty of magic-restoring items.

Hell, by the end of the game, Alex could have done most everything on his own. Each of his allies fits into their own little niche, but he does everything with proficiency. His attack power is comparable to Kyle's, but he also winds up with the most magic points, some amazing draconic attack spells, as well as some ability to heal. He'll also equip the best armor, making it more difficult for enemies to damage him than anyone else in the party. He's so powerful that I found myself ranking the others simply based on how well they complement his impressive abilities.

When I think about this game, other than its fluctuating difficulty, it's hard to come up with flaws that weren't inherent to games from this era in general. You know, things like having a wildly-fluctuating encounter rate where you might go a long ways without triggering a battleand then get drawn into fights every couple steps for a while. However, I probably should say that I do feel a bit bad about my criticisms of how Kemco's mobile RPGs all tend to have a very limited number of dungeon tilesets that get recycled repeatedly. For much of The Silver Star, you'll find yourself going through two dungeon types regularly: winding cave mazes and linear towers. Things get more creative down the stretch, but it was hard not to audibly groan after a certain point when I'd enter a dungeon to find I'd be meandering through another cave appearing to be a random collection of corridors strewn together.

However, The Silver Star's charm allows it to generally overcome its flaws. I mean, if you decide to pick up this game, you will have to overlook the simple fact that, as a game approximately 25 years oldwell, it's an old game that will show its age at points. On the other hand, it possesses a better battle system than most games of its time, as well as an engaging group of characters. While gamers would need some degree of appreciation for retro RPGs to get into this one, if they do, it won't take long for them to realize just why this game has been remade multiple times for more modern systems.

If you enjoyed this Lunar: The Silver Star review, you're encouraged to discuss it with the author and with other members of the site's community. If you don't already have an HonestGamers account, you can sign up for one in a snap. Thank you for reading!

© 1998-2021 HonestGamers
None of the material contained within this site may be reproduced in any conceivable fashion without permission from the author(s) of said material. This site is not sponsored or endorsed by Nintendo, Sega, Sony, Microsoft, or any other such party. Lunar: The Silver Star is a registered trademark of its copyright holder. This site makes no claim to Lunar: The Silver Star, its characters, screenshots, artwork, music, or any intellectual property contained within. Opinions expressed on this site do not necessarily represent the opinion of site staff or sponsors. Staff and freelance reviews are typically written based on time spent with a retail review copy or review key for the game that is provided by its publisher.