Until its fourth numerical installment came around, the Resident Evil franchise inspired fear not just by presenting horrifying monsters and startling moments, but by making a nightmare out of mere existence. To survive, you had to be smart, conserve ammunition and health items for major battles, and endure long stretches between saves. Code Veronica X matches these criteria in every regard, finding ways to fit in all of the series trademark elements while adding a few nuances all its own.

As the campaign begins, Claire Redfield finds herself imprisoned on a remote island where a new strain of T-Virus has materialized. She starts with nothing but a combat knife and a handgun, and from there she must somehow find a way off the island. The path she walks will reveal many secrets and new places to explore. Meanwhile, her brother tracks her progress both on and off the island, as part of a (somewhat) belated rescue effort.

Over the course of the adventure, youll experience the true meaning of horror. This isn't the sort of horror that relies on frightening monsters or excess gore, although such elements do exist. Rather, it's the horror produced by the fear of the unknown. To avoid unnecessary collisions with malevolent mutants, you walk instead of run. Such care is necessary because just a couple of smacks or bites can knock your health down quite a lot. Such precaution isnt always possible, however. To prevent over-consumption of the few guns and the limited ammo you have available, you often need to avoid enemies rather than kill them. This dynamic frequently forces you to run instead of warily stalking about. 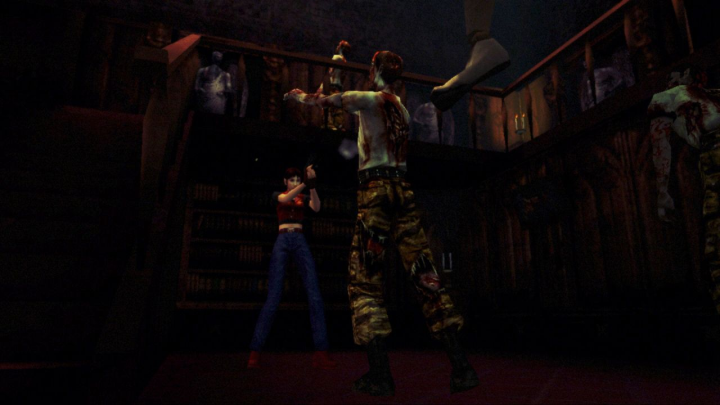 Unsure of what lies around the corner, you wisely conserve your best equipment for boss encounters. You always know from disturbing cutscenes or the thumping of Claires heart as she opens a door that something bad is about to happen. You just never know precisely when it will, though, until finally it does. Taking the Bowgun (a kind of crossbow) from the laboratory, you witness the gruesome and startling death of the researcher inside. You know that youll face whatever occupies that chamber eventually. The anticipation of that eventual confrontation and the uncertainty where your adversary's strength is concerned, even its physical characteristics, create an ever-present shroud of dread and foreboding as your journey continues. A similar feeling permeates everything you do, and applies to every beast that appears. Fearful anticipation is attached even to simple acts like collecting key items, since these often trigger the appearance of some new threat or, at the very least, the re-infestation of once-cleared corridors.

Dread is the ultimate terror, and it always wins. It clouds judgment, befuddles the mind. Ive often gone into situations incorrectly prepared, misjudging the kinds of weapons I needed for the next round of foes. Once, as Chris, I brought submachine guns to a room full of zombies, thinking Id be fighting spiders and a weird amphibian lizard thing that shoots electricity. Granted, these particular zombies could spit acid, but even so, I knew the submachine guns I had with me were a bit much for the task at hand. Later, I fought the monsters I had thought I would actually be battling. My mistake led to the near-depletion of one of the most powerful weapons at my disposal.

The need to properly manage items is constant, and mistakes are costly. With an eight-item limit in effect (which later becomes ten), great consideration must be taken when it comes to weapon choice. The remaining space will likely be used for healing and story-progression items. I fell prey to this clever trap more than once, but one specific incident from early in the campaign still rings in my memory. In an old warehouse, I collected a pair of submachine guns for a fellow stranded prisoner, naively thinking my handgun would be enough for my own use. I was wrong. Instead, I was jumped by a monster known only to this game, the bandersnatch. Resembling a mutant orangutan with extendable arms, the bandersnatch proved quite resistant to my puny weapons, and nearly killed me. Thinking it was a boss, I reloaded, this time bringing a more powerful gun, and found the task much easier. 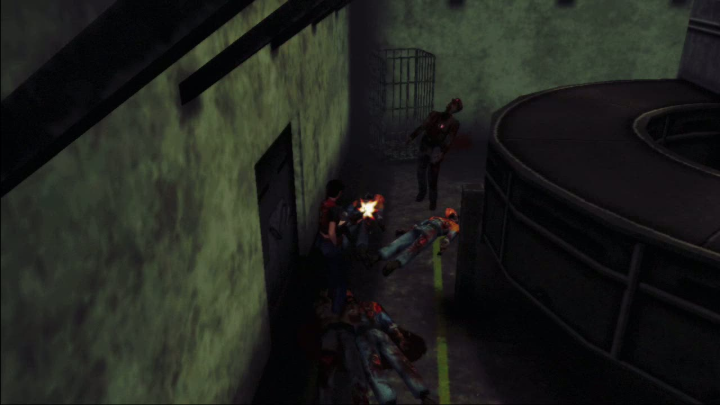 I progressed from there and soon found out that the bandersnatches are, in fact, regular enemies. Cursing ensued, but not as much as might have if I hadn't been carefully conserving ammo up to that point. I still had plenty of good stuff remaining. Even so, I acquired a great fear of those lethal beasts, one that didn't diminish much even when I learned of their weakness to explosives. A dangerous balancing act then followed, where I took care to only use the grenades necessary to kill them while still saving enough for my eventual showdown with one of Resident Evils most infamous creations.

I later regretted my liberal use of explosives, because better conservation would have made Chriss half of the game considerably easier. But I didnt mind too much, as Id managed to conserve other heavy weaponry that served me well through the game's final moments.

Despite the failures and successes that eventually allowed me to achieve victory, getting to the end was not easy. My effort involved multiple retries from earlier saves to complete some portions of the campaign to my satisfaction. Simply wasting too much ammo on pesky moths and still getting poisoned could ruin my current run. I probably saw more "Game Over" screens than there are words in this review. But, frustrating as that sometimes was, its also kind of the point. If you dont think, you die. If youre not careful, if youre not afraid, and even if youre too afraid, you die. Once you reach your goals with confidence, though, you can win. Thats what makes the game so rewarding.

If you enjoyed this Resident Evil: Code Veronica X review, you're encouraged to discuss it with the author and with other members of the site's community. If you don't already have an HonestGamers account, you can sign up for one in a snap. Thank you for reading!

© 1998-2021 HonestGamers
None of the material contained within this site may be reproduced in any conceivable fashion without permission from the author(s) of said material. This site is not sponsored or endorsed by Nintendo, Sega, Sony, Microsoft, or any other such party. Resident Evil: Code Veronica X is a registered trademark of its copyright holder. This site makes no claim to Resident Evil: Code Veronica X, its characters, screenshots, artwork, music, or any intellectual property contained within. Opinions expressed on this site do not necessarily represent the opinion of site staff or sponsors. Staff and freelance reviews are typically written based on time spent with a retail review copy or review key for the game that is provided by its publisher.