At the time of Assassins Creeds release, articles praised the title for its innovative level design, crowd-based social mechanics and player creativity in accomplishing the task at hand. The reality, however, is quite the opposite. The levels feel stagnant, the mechanics gimmicky, and any sense of freedom becomes redundant.

At first, the game seems like it could have had promise. The tutorial introduces us to Desmond Miles, the modern-day narrator-observer-facilitator that progresses the story. Through his memories, we play as Altair, a master assassin during the Third Crusade, who, due to inexcusable arrogance, loses his rank shortly after the opening mission. During this time, and shortly thereafter, the game introduces us to some fun mechanics, such as climbing up buildings and traversing rooftops with relative ease, a la Prince of Persia, as well as performing our first true assassination in the city of Damascus.

Unfortunately, killing designated targets isnt as simple as walking up behind them and stabbing them in the back, and this is where things become tedious. Before he can unlock his targets, Altair actually has to conduct investigations to discover information about them. At first, these tasks seem enjoyable, but soon their inanity works against them. Many of these quests employ stealth to either pickpocket unsuspecting messengers, eavesdrop on loose-lipped conspirators or trail loud-mouthed henchmen until you reach a quiet place to interrogate them. These activities play into what Assassins Creed tries to accomplish with its hidden in plain sight approach to stealth, but their execution just doesnt match the intent. In fact, once youve completed a few (re: three) assassinations, youll have seen everything the game has to offer to the point where beating up interrogation suspects, inconspicuously listening to chatter and stealing letters simply becomes too tiresome to tolerate. Even assassinating smaller targets for imperiled informants cant shake the sheer monotony permeating the majority of the game. 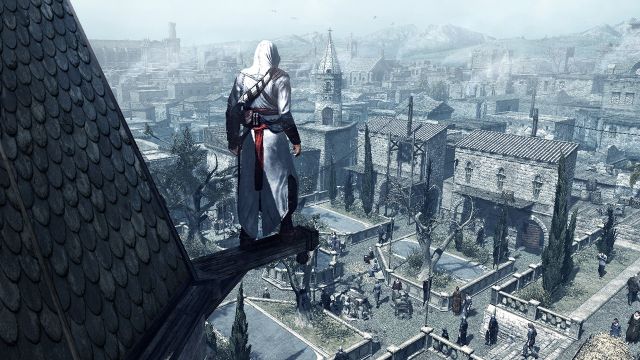 Of course, its not enough for Altair to just trot off and investigate; he often has to ferret out where to start. Thats because while each of the three main cities is divided into districts, theyre still too large to explore without any real guide. Therefore, Altair must scale structures taller than the rest of the city and gaze at your surroundings, which in turn reveals quest markers on the map. To Ubisofts credit, the scale presented here is quite impressive. Climbing to the pinnacle of the cathedral in Acre reveals a breathtaking miles-long horizon. The city is beautiful to admire from this distance, even bathed in a gloomy blue haze, but such admiration shouldnt be imposed as necessary to progress the story.

Engaging in any sort of activity requires the utmost caution so as not to upset the public and, more importantly, the guards. Even the simplest of tasks can set off a military response, regardless of how careful you are. Did you accidentally hop up onto some merchants fruit stand because you brushed too close to it in the street? A suspicious guard will perceive you as a threat! Even just briskly walking in an attempt to track your next target can draw unwanted attention, which makes speed challenges rather difficult. After all, its hard to remain inconspicuous when you have to dash up and through the city in an effort to collect flags for some lazy informant with a lousy excuse as to why he needs these items in such a short amount of time.

Fortunately, hiding from guards doesnt require much effort, either. Should you find a mob chasing you, just sprint through the crowded streets, shoving people out of your way until your pursuers lose sight of you. Once they lose you, simply jump into a haystack and wait ten seconds. You can then literally dance a jolly jig in front of the same guard that had spotted you earlier without soliciting a response. Just dont play leapfrog with a bundle of firewood lying in the street.

Of course, its really much simpler to just flat-out kill everyone that pursues you. Its perhaps not the way Assassins Creed was meant to be played, but it certainly makes life easier. You can just as easily wipe out a patrol of 15 guards as you can hiding from one. Sure, it might take more time, but at least you dont have to worry about attracting more angry pursuers as you race through a city in an attempt to break their line of sight. 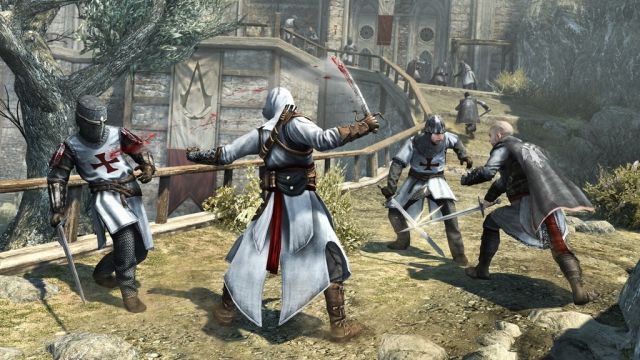 Becoming a careless mass murderer certainly shows you have a choice in how you assassinate important leaders, but it also strips the game of something it was meant to be. Considering the resounding success Ubisofts Assassins Creed franchise has experienced, it seems surprising that its first installment defeats the purpose of what it tried to do.

If you enjoyed this Assassin's Creed review, you're encouraged to discuss it with the author and with other members of the site's community. If you don't already have an HonestGamers account, you can sign up for one in a snap. Thank you for reading!

© 1998-2021 HonestGamers
None of the material contained within this site may be reproduced in any conceivable fashion without permission from the author(s) of said material. This site is not sponsored or endorsed by Nintendo, Sega, Sony, Microsoft, or any other such party. Assassin's Creed is a registered trademark of its copyright holder. This site makes no claim to Assassin's Creed, its characters, screenshots, artwork, music, or any intellectual property contained within. Opinions expressed on this site do not necessarily represent the opinion of site staff or sponsors. Staff and freelance reviews are typically written based on time spent with a retail review copy or review key for the game that is provided by its publisher.