Titanfall received critical acclaim after its release in 2014 for good reasons, and it has been reviewed to death by just about everyone, including Mike Suskie here on Honestgamers. There probably isn't a lot I can say about it that hasn't already been said, so I will elect to take a different approach with my review. You see, I came on board with Titanfall only very recently. I was not able to afford the game at the time of its release, but now that the price has dropped from $80 CAD to a reasonable $25 and the map packs are being given away for free, I was able to jump on board rather easily and painlessly. Since I have never played the game before now, I am reviewing it with fresh eyes as someone who did not experience the inital hype, long after the inevitable metagame has set in, and after it has been well-worn like an old shoe.

I expected a lot of bullshit and hacking to be going on the first time I logged in, and to be fair, there is some of this, though far less than I expected. Bunnyhopping smartpistol users are a problem, and elite players do have some tricks up their sleeves to effectively stomp newbies faster than you can blink your eye. However, with the application of clever tactics, it's still possible to compete with the best of them right out of the starting gate. This made me very happy. In less than a week, I was consistently hitting the top of the scoreboards, much to the veterans' chagrin. 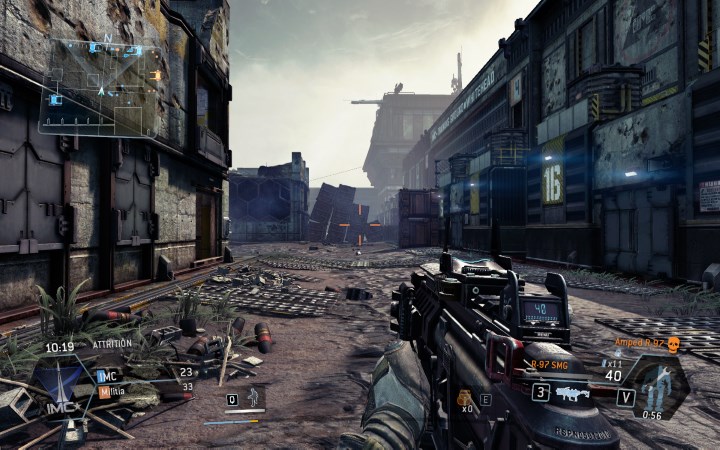 Titanfall appears to have some longevity, even if many people have since lost interest in it. It has been described as being "dead", but I disagree with this. Sure, it's never going to beat Counter-Strike's numbers, but it still seems to have a healthy and dedicated playerbase of up to 800 active players at any given time. That number may seem low, but it's great compared to Hawken, another mech shooter I enjoy, which usually has a meager 200. Either way, I never have to wait long to find a match.

I can understand why it might not have the same long-term appeal of some other games out there, though. The content is on the thinner side and it can be a little repetitive. The campaign mode consists of the same nine missions over and over again, and whether you win or lose has virtually no bearing on how the story develops. It's like seeing a rerun of one of your favourite shows over and over again. No matter how much you love that show, it will still get tiresome to watch it repeatedly. The fact that there are only three mechs to choose from doesn't help this. The developers seem to know this at least, which is why Titanfall 2 will reportedly feature six new titan types.

Titanfall's progression is wholly unsatisfying, too. Progression-based gamers will probably lose interest quickly due to the fact that it takes a paltry two days to reach the level cap. Following that, there are ten prestige levels, but they are also earned surprisingly quickly. They also don't do anything tangible beside giving you a shiny icon next to your name and an expanded burn card inventory, which is somewhat disappointing. Thus, once you've done all that and unlocked all of the weapons and mods, there is nothing left to do in Titanfall except kick ass and raise your kill/death ratio. This is not an inherently bad thing, as most multiplayer shooters generally boil down to this anyway, but I think the fact that Titanfall puts such emphasis on progression only to have it end so quickly might be disappointing to the progression-based gamers out there, who will receive continuous notifications that they are earning experience with every kill, only to realize that it is ultimately meaningless. 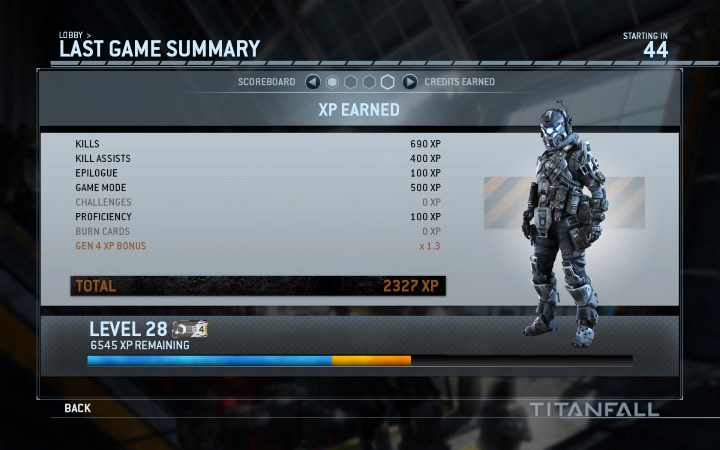 A small personal gripe I have relates to believability. I was shocked at how weak the Titans seem to be. A single pilot on foot can easily down a Titan in a few hits if he knows what he's doing, and this tends to happen a lot. In my opinion, a giant unstoppable war machine like a Titan should never have to run away from a single soldier on foot, but that is exactly what happens in this game. It begs the question: If the pilots are so utterly overpowered, why do the IMC and Militia even need Titans? Why don't they simply train an army of unstoppable bunnyhopping, smartpistol and charge-rifle wielding supersoldiers? It would be far more cost-effective, I would think.

Regardless, the verdict on Titanfall two years post-release is that it's still really good. It is a solid multiplayer shooter with unique mechanics, amazing graphics, excellent sound design and top-shelf voice acting. It has managed to keep my interest, at least for now. I don't know if I will log 1300+ hours into it the same way that I did with Hawken, but I am definitely not regretting my purchase either way.

Minor gripes aside, this game really only has two main problems: It desperately needs its campaign to be presented as a single-player mode, and the ubiquitous smartpistol metagame needs to go. Titanfall 2 should fix both of these things, and if anything, the hours I spend with Titanfall will be good practice for when the second game finally drops. 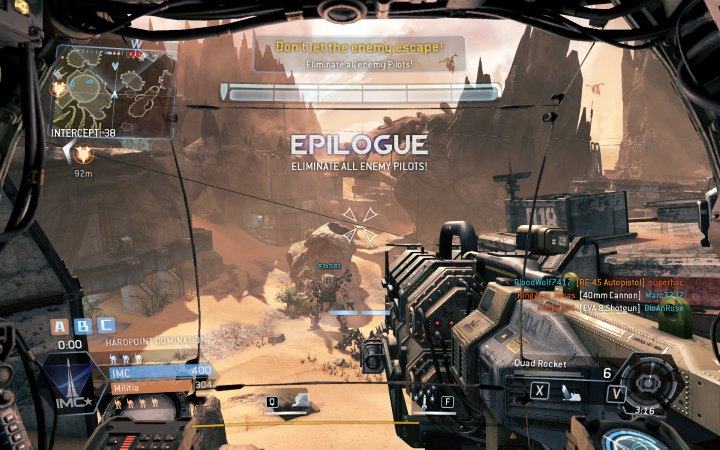 If you enjoyed this Titanfall review, you're encouraged to discuss it with the author and with other members of the site's community. If you don't already have an HonestGamers account, you can sign up for one in a snap. Thank you for reading!

© 1998-2021 HonestGamers
None of the material contained within this site may be reproduced in any conceivable fashion without permission from the author(s) of said material. This site is not sponsored or endorsed by Nintendo, Sega, Sony, Microsoft, or any other such party. Titanfall is a registered trademark of its copyright holder. This site makes no claim to Titanfall, its characters, screenshots, artwork, music, or any intellectual property contained within. Opinions expressed on this site do not necessarily represent the opinion of site staff or sponsors. Staff and freelance reviews are typically written based on time spent with a retail review copy or review key for the game that is provided by its publisher.