PlatinumGames is a capable development studio that has produced some of the industry's most intense and memorable games. But no creative force is consistently in top form, a point that Teenage Mutant Ninja Turtles: Mutants in Manhattan proves quite... capably.

Over the years, the Teenage Mutant Ninja Turtles have appeared in multiple comics, movies and cartoons. They've also starred in a number of well-received video games, dating back to the 8-bit and 16-bit eras. Keeping up with their full history is a bit of a project, and completely unnecessary in order to jump on board here. There are clever little references to catch if you're a long-time fan, but you'll be fine even if you have only a passing familiarity with the license. 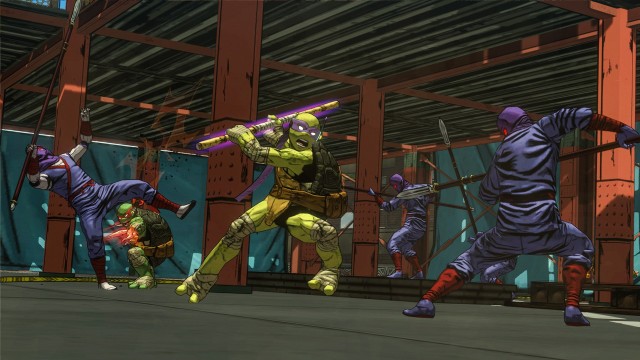 Mutants in Manhattan hit the marketplace around the same time Michael Bay's second movie about the turtles arrived in theaters, but the two productions otherwise aren't linked. PlatinumGames seems instead to have drawn its inspiration from the IDW comics (judging by the 50 comic covers you can collect and view). The turtles and their allies and enemies are beautifully presented, so that they look like they leaped from the page, and the environments are detailed and strikingly illustrated. The game feels authentic and is a joy to watch.

Much like the visual style, the plot suits the brand. A fresh crime wave is sweeping the city, keeping police officers scrambling and the turtles very busy. The pizza-loving quartet struggles to make sense of vandalism and theft that serve no obvious purpose. What do a mutant rhino and boar need with bags of cash? What's the point in blowing up a construction site? In order to get answers, the turtles must fight their way through nine action-packed stages, first facing off against generally inept thugs, and finally discovering the location of the local area boss.

For quite a few years, TMNT games have been brawlers. That's still the case here, but the developers also added some surprising depth. As you battle against the foot clan and other nasty foes, you gain experience that lets you gain levels, RPG-style. New skills then become available for purchase. You unlock them by spending BP (battle points) that are also earned by clearing stages. As many as four skills can be equipped on each turtle at once, and you level them up to decrease their cooldown period and general efficacy. You customize your "loadout" between stages, and can also equip one or more charms, depending on the difficulty setting you select (more on that in a moment). 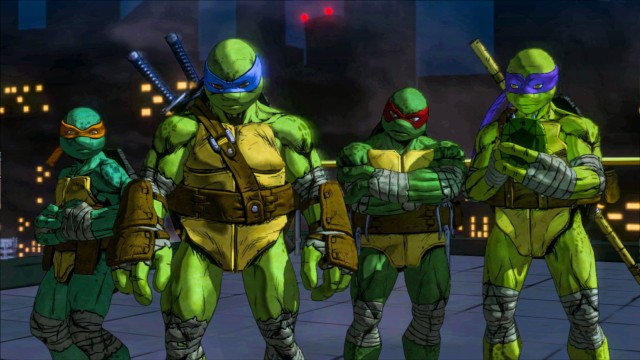 Combat is more complex than is initially evident. Turtles jump, wall run, and even glide through the air by using their shell as a parachute. That last bit makes no sense whatsoever, but it works beautifully and ensures that the agile heroes can remain mobile. It's important to move almost constantly, or else enemies will pummel you without mercy. The heroes can also perform quick dodge rolls, or block and parry, depending on their timing. If you get the timing just right, you can make terrific openings and use them to deal considerably more damage than is otherwise possible. Practice makes better.

All of the above might sound good, and it certainly could have been the basis for a great game, but Mutants in Manhattan fumbles things badly enough in a few key areas that you may wonder if the game was shipped to arrive with the movie, rather than because it met the developer's usual standards.

The game's biggest problem is arguably its lack of balance, on virtually every front. Except for the weakest of enemies, miniature wheeled robots that have appeared in the titles since the very beginning, your foes are capable of sustaining far too much damage before they finally collapse. Some standard foes (which qualify as mid-boss types) might take two or three minutes to fell, and they don't do anything interesting enough that the fight is enjoyable. A lot of stages thus last longer than they should, even when you're not actually at risk. 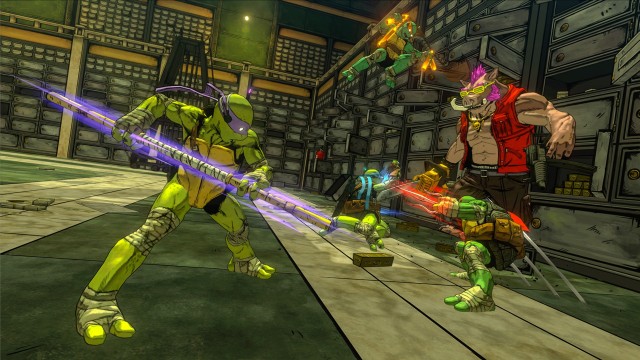 Bosses encounters ramp everything up a level. On the Normal setting, the bruisers you face have a life bar that must drain seven times before you win. That often takes a lot of time, and forces players to memorize attack patterns and figure out how to avoid moves repeatedly. If you can avoid a blitz every time it comes your way, though, why should you have to waste your time doing so 10 times over the course of a single fight? Surely, 2 or 3 would suffice. The Easy setting shaves the energy meter by a count of 2, plus you inflict more damage with each hit. Bosses then become relatively toothless, as the scale tips too far in the opposite direction. Formerly grueling affairs are now a walk in the park. It's suddenly easy to win just by standing on the sidelines and tossing stars while your fellow turtles keep the boss busy.

Even if you're playing alone, you have three friends along for the fight. You get to switch out between them whenever you like, as long as they're still in action, which the optional tutorial recommends so that you can spam more special moves. However, swapping too often is tiresome and slightly awkward, plus it's not effective on the higher settings because your AI friends are nincompoops whenever they face a boss, even though you can assign different marching orders. All too often, your three friends are taken out of commission with a single ground pound by Bebop or whatever. You have to quickly rush over and revive them before they vanish for a period of 15 seconds or so. Saving them puts you at risk, but letting your allies drop out of the battle also places you at a severe disadvantage because your adversaries tend to have massive attack range and a new fixation on your death.

Stage difficulty also varies. On the Easy setting, the final boss is mostly harmless, even though the battle looks awesome. But the previous stage's final fight is legitimately difficult, even on the same setting. Some standard brawls along the way, which pack a tight area with enemies that fire lasers and lob grenades and knock you against explosive barrels, may prove more difficult than later showdowns that were surely meant to be climactic. 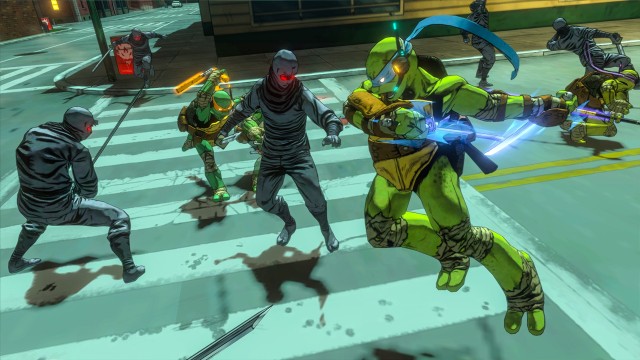 The game also recycles environments a lot. There are really only four distinct venues: the city streets at night, the rooftops, a train station and the sewers. They all look good for what they are, but there's not enough variety. You're encouraged to revisit stages, so that you can snag collectibles you might have missed and grind for experience and such. You might even find yourself facing additional bosses, and viewing new cinema sequences. But since some stages aren't especially fun to visit even the first time, you might lack the desire to return to them any more often than the campaign requires.

There's not much wrong with Teenage Mutant Ninja Turtles: Mutants in Manhattan that additional development time couldn't have effectively fixed. Further tweaking could have improved the ratio of exhilaration to tedium, and found superior difficulty balance. A greater variety of environments might easily have been added, and the most commendable elements might also have been expanded. Unfortunately, the team at PlatinumGames clearly ran out of time for the project. The uneven game that resulted is only just barely worth any time of your own, even if you're a big fan of the license.

If you enjoyed this Teenage Mutant Ninja Turtles: Mutants in Manhattan review, you're encouraged to discuss it with the author and with other members of the site's community. If you don't already have an HonestGamers account, you can sign up for one in a snap. Thank you for reading!

© 1998-2021 HonestGamers
None of the material contained within this site may be reproduced in any conceivable fashion without permission from the author(s) of said material. This site is not sponsored or endorsed by Nintendo, Sega, Sony, Microsoft, or any other such party. Teenage Mutant Ninja Turtles: Mutants in Manhattan is a registered trademark of its copyright holder. This site makes no claim to Teenage Mutant Ninja Turtles: Mutants in Manhattan, its characters, screenshots, artwork, music, or any intellectual property contained within. Opinions expressed on this site do not necessarily represent the opinion of site staff or sponsors. Staff and freelance reviews are typically written based on time spent with a retail review copy or review key for the game that is provided by its publisher.