Traders: The Intergalactic Trading Game is a small-studio title that was released for PC and Amiga back in 1992. That was a good year for PC gaming in general. Classics like Wolfenstein 3D, Star Control II, Dune II and Ultima VII hit the shelves, and Traders was innocuously released among them, overshadowed and overlooked. Traders was also a great game, but there was no way it could compete with those kinds of releases. It also received basically zero promotion. The fact that its developers and publisher were nobodies didn't help things either. Ever hear of their other groundbreaking titles such as Medieval Warriors or The Final Conflict? Yeah, me neither.

Anyway, I remember picking up a boxed copy of Traders on a total whim, mostly because I was a strange child who enjoyed games about commerce. I was a fan of Trade Wars: 2002, for example, and when I saw a game simply named "Traders" on the shelf I guess it stirred something in me. I'm glad I picked it up though, because I spent many hours playing it and enjoyed every minute of it. 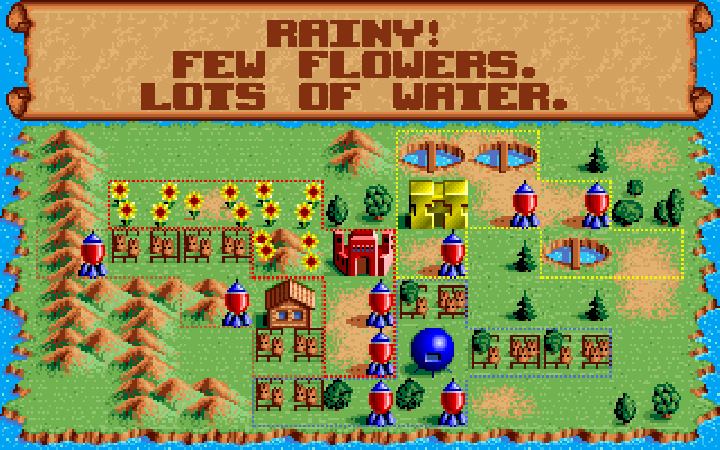 Traders is a turn-based multiplayer game where you manage the lives of peculiar creatures called "plubbers" (which may be a play off the word "plebeian", though I'm not entirely sure). They live on a planet called Fat-Star, which was called Earth in some ancient era, though the human race is long since extinct. Now, the planet is named after its ruthless reptilian overlord Fat Mike, a big, green, ill-tempered asshole who also happens to be your landlord. Every turn you must to pay rent to him, but he only accepts payments in the form of snails, because that is his primary diet. Nope, I'm not making this up.

Anyhow, living under Fat Mike's thumb really sucks, so the goal of the game is to make enough money to buy a ticket off Fat-Star and retire someplace nice. You do this is by annexing land, building structures, harvesting resources, and then playing the market. Buying low and selling high is a good place to start, although it is a bit more complicated than that. You need to worry about acquiring resources to keep your own operations intact as much as you need to worry about selling your products at the right times to make those mad profits. Everything in the game is interconnected, and keeping an eye on how the economy shifts and changes is the key to victory.

And, of course, you need to worry about acquiring snails to feed Fat Mike. You can buy them from other players with money, or you can send rocket expeditions out into space to harvest them from other worlds. But watch out for space pirates! They're dicks, and will shoot down your ships. It's all very silly, and the game's quirky art style and bizarre writing make no effort to hide that. The humor, often delivered deadpan, somehow works. 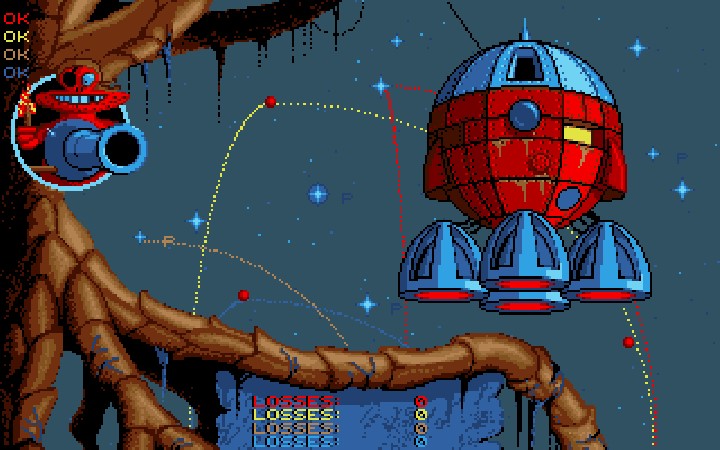 However, the game's overall weirdness can be a bit distracting when you're playing the game for the first time, as the game's mechanics are very confusing if you don't know what you're doing. It was released in the era before ubiquitous tutorials were a thing, and as such, there are absolutely no explanations provided as to how things work. Without reading a guide or the printed manual, you are pretty much going to be lost. However, if you do find a competent resource to learn the game, you will quickly find that the game isn't that complicated, and soon you will be buying, selling and harvesting like a boss.

Trading isn't all the game is about, though. In addition to the above-board dealings you engage in every round, you can also arrange clandestine heists against your competitors. You do this by designing robots whose sole purpose is to seek out and raid enemy warehouses (you know, so that you don't get your own hands dirty). If your robot succeeds, they'll steal a bunch of resources and return them to you, and then you can laugh all the way to the bank. These sequences are satisfying when they result in victory, although they are a bit slow and the controls are clunky. They also tend to be a bit repetitive due to the fact that you have to re-design your base defenses every round from scratch. 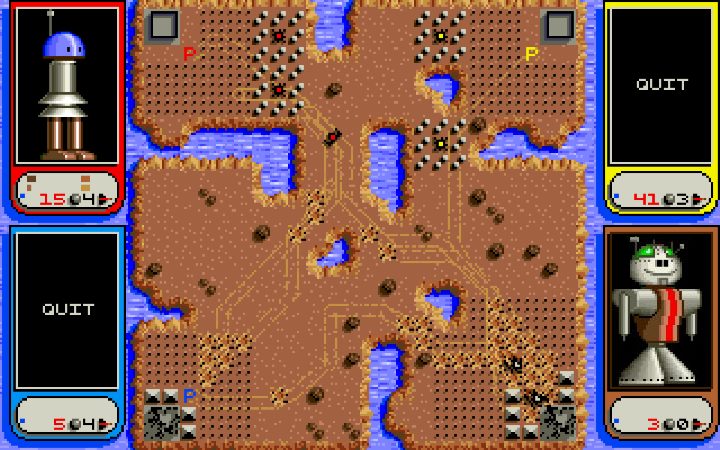 Then, in-between trading and robot battling, there are interludes where random events occur, and there is also an end-of-round shopping sequence where you can buy essentials, partake in exotic gem trading, or play the lottery. Oh, and of course, there is the sequence where you have to pay your rent to Fat Mike, or potentially deal with the consequences if you can't pay up (resulting in him destroying your fields or repossessing your land).

The game's many features and mini-games are also fully toggleable. Don't like the robot battles? Turn them off. Don't wanna add gem trading into the mix? No problem. Don't want those really awful catastrophes like earthquakes and meteor strikes to happen anymore? That's fine. Want the terrain to be random, instead of realistic? Sure can. You can strip the game down to its bare bones, or you can make it as wacky and unpredictable as possible. 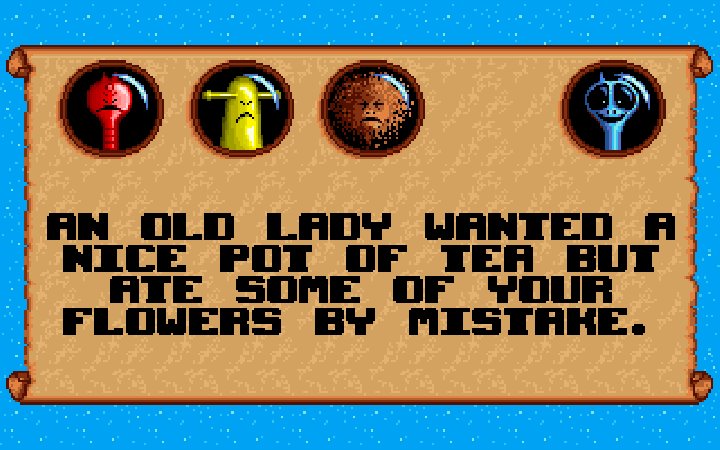 Overall, Traders is a robust title with a lot to offer, but I should be fair and mention its flaws. Firstly, the outcomes of each round are sometimes more reliant on random chance than clever planning, and this is especially evident with the weather patterns that affect the resource yields and the "random" disasters that sometimes befall certain players. Suspiciously, human players always seem to befall more calamities than the AI players do. In fact, the AI has a tendency to outright cheat once in a while. The best example of this is the lottery. If you see more than one AI choosing the exact same code of colours on their lottery ticket, it is pretty much a sure bet that they are all going to win. Such transparent attempts to juke the outcome of the game are kinda disappointing, but this is a game that is best played against other human players anyway.

Despite its faults and the fact that it hasn't aged very well, Traders is still a lot of fun, especially if you have some buddies to play with. The process of managing your fields, strategically expanding your territory, and making slick profits is surprisingly addictive, and when playing against live opponents, half the fun of the game comes from making sneaky, tentative alliances and backroom deals to take down the players in the lead. 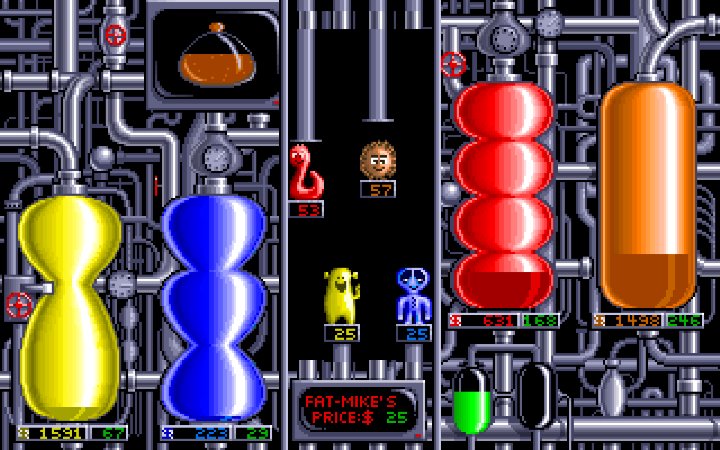 I should mention that Traders is actually a clone, though. It adopted most of its core mechanics from another classic trading game, M.U.L.E., which won awards for some very good reasons. Therefore, Traders' gameplay is built on some very solid foundations. M.U.L.E. was kinda boring if you played it too much though, because it focused on trading and nothing else, but Traders expanded on that winning formula by adding more features and improving on what was already there. As a result, Traders has way more replay value than M.U.L.E. ever did.

For some reason people only remember M.U.L.E., though, and that's probably because it was released on more popular platforms such as the Atari, Commodore 64 and NES, reaching a far wider audience. That game has since been remade twice, whereas Traders has fallen into obscurity as abandonware. It's still a hidden gem if you care to look, though most people probably won't. 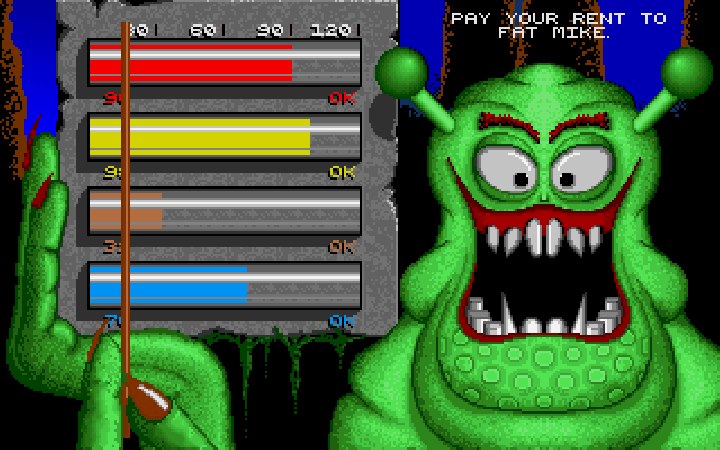 If you enjoyed this Traders: The Intergalactic Trading Game review, you're encouraged to discuss it with the author and with other members of the site's community. If you don't already have an HonestGamers account, you can sign up for one in a snap. Thank you for reading!

© 1998-2021 HonestGamers
None of the material contained within this site may be reproduced in any conceivable fashion without permission from the author(s) of said material. This site is not sponsored or endorsed by Nintendo, Sega, Sony, Microsoft, or any other such party. Traders: The Intergalactic Trading Game is a registered trademark of its copyright holder. This site makes no claim to Traders: The Intergalactic Trading Game, its characters, screenshots, artwork, music, or any intellectual property contained within. Opinions expressed on this site do not necessarily represent the opinion of site staff or sponsors. Staff and freelance reviews are typically written based on time spent with a retail review copy or review key for the game that is provided by its publisher.