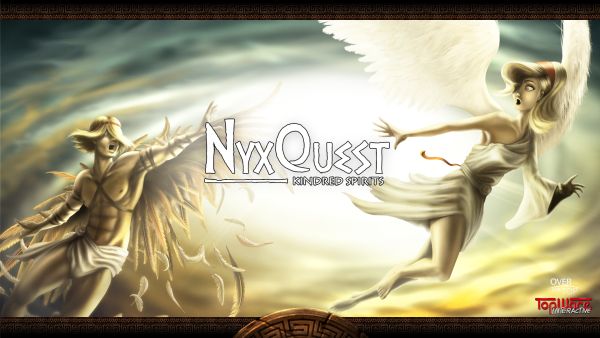 After playing through an exciting platformer, it's tempting to gab profusely about your favorite segments with anyone who will listen. One moment, you and a buddy might be discussing your weekend goals. The next, you're torturing regaling your friend with a tale about plummeting down a long shaft filled with massive saw blades, then battling a consortium of flying octopuses after reaching the bottom. Or you're yammering about a brawl against Death atop a ghost ship's mast. Or perhaps you're blathering endlessly about floating from one airship to another, dodging cannonballs and Bullet Bills whilst trying to preserve your precious raccoon suit. A well made platformer all but demands passionate discussion.

Merely average platformers, on the other hand, are quickly forgotten. They may not be broken or otherwise offensive, but they also fail to make a lasting impression. Over the Top Games' sidescroller, NyxQuest: Kindred Spirits, is one example of that condition.

NyxQuest drops you in a scorching, desolate version of ancient Greece. For undisclosed reasons, the titan Helios decided to pulverize the land with a world-destroying heatwave, leaving behind little more than sand dunes and crumbled temples and statues. None of that matters to the protagonist Nyx, though. She's searching for her lost friend, Icarus, who lies unconscious on Mount Parnassus. She'll need the aid of the deposed deities if she wishes to survive long enough to reach him. 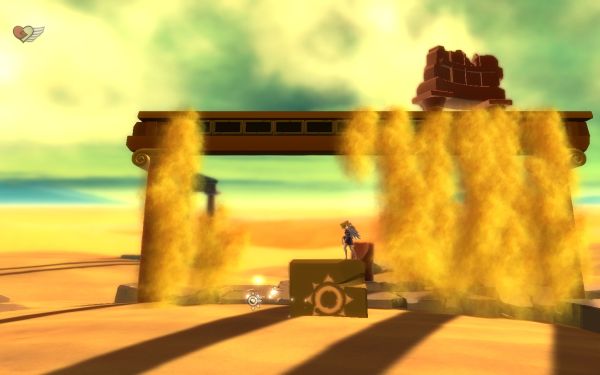 Despite its bleak premise, NyxQuest doesn't quite possess the look of a dark adventure. Its presentation is mostly cartoony, which is not what you would naturally expect from a post-apocalyptic title. On the flip side, the game's limited bestiary features sinister beasts that exude puffs of black smoke, including harpies, monstrous satyrs (or are they supposed to be Minotaurs?) and a drastically redesigned Lernaean Hydra. Gone is the monster's classic, strictly serpentine appearance, traded for that of a demonic dragon. It's possible the developers intentionally aimed for a compromise between typical platformer cuteness and melancholy visuals, but the blend of styles is unfocused and jarring.

To make matters worse, the environment sees no substantial change throughout the campaign. NyxQuest's digs are gloomy at first, but you grow accustomed to them after three levels or so. Endless dunes serve as the background to every stage, while dilapidated brick structures and pillars comprise the foreground. If you're lucky, you might glimpse a pinkish horizon or a mountain range in the distance, but such alterations do little to break the visual monotony.

NyxQuest is a mostly functional platformer, though, one highlighted by a few enjoyable moments. Its only real hiccup manifests every time you respawn. The game disallows jumping or flying for a few seconds after you return from the dead. Thankfully, that hitch doesn't break the game. Of course, it would be difficult to mess up NyxQuest's simple control scheme, which consists mostly of a jump ability and a special move. With the former, you gain elevation with each button press, or glide downward while holding the leap button, a la Princess Peach in Super Mario Bros. 2. Godly powers (your special moves) offer a few skills necessary to survive various obstacles you encounter in each stage. Zeus, for instance, bestows a telekinetic spell that allows you to lift stone blocks or move pillars. Near the end of the campaign, you also receive a lightning attack that destroys any foe on the screen. 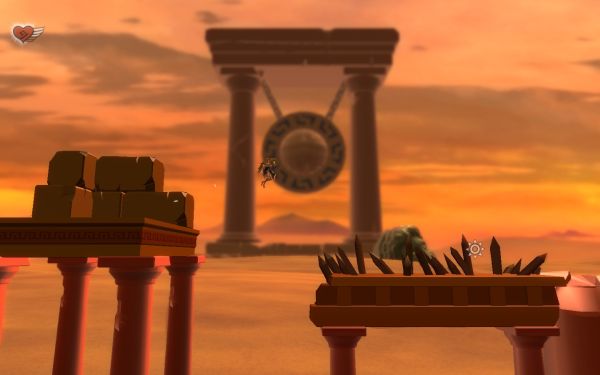 Stable mechanics alone may keep a game out of serious trouble, but they won't win it any awards. That feat typically requires challenging and engaging design choices. Sadly, NyxQuest is fond of not only hosting ho-hum sections, but reusing them to the point of tedium. There's one scene, for example, where you must use a broken piece of a pillar as a sand surf board. While riding the marble chunk, you must then utilize your telekinesis to slide it along the ground, thereby avoiding dangerous sand geysers. It was a pretty neat puzzle the first time I encountered it, but that mechanic's charm diminished with the campaign's four or five subsequent retreads.

Repeatedly, you'll engage in a limited series of familiar activities as you complete NyxQuest's dozen or so levels. It's common to knock over pillars or raise platforms. It's also not rare to leap off of a block you've just telekinetically heaved into the air. Or to reroute a wind current. Or to readjust a fireball's flight path, such that it dispatches a foe or shatters a fragile spot in a wall. NyxQuest not only recycles a lot of its perils and challenges, but fails to reuse them in meaningful or challenging ways...

...until you reach the final stage. 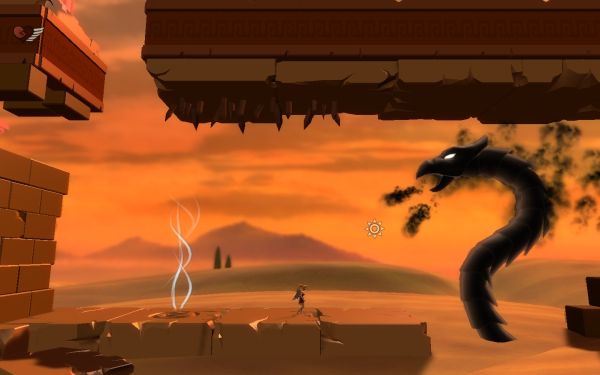 Nearly every impediment you face prior to reaching Mount Parnassus returns in full force during the final moments of your adventure, all at once. You'll leap over the satyr/Minotaur beings and smack into harpies, all while avoiding meteors launched by Helios (who hangs out in the background). Meanwhile, you constantly must aim the cursor to deliver lightning bolts to all three aforementioned menaces. As if that's not enough, you simultaneously must avoid pitfalls and other ground traps, beware of collapsing bits of floor, and evade clingy red orbs that impede your progress. It's an overwhelming trial, almost as if the developer didn't know how to properly ramp up the game's difficulty rating and decided to spam its short list of hazards instead.

Honestly, though, NyxQuest: Kindred Spirits isn't a horrible game. Were you to play through it one rainy afternoon, you wouldn't likely regret having spent that time with it. You probably wouldn't have any stories to tell your friends, either, because none of the game's content stands out from the pack. It's just one more sidescrolling platformer packed with familiar material, trying to carve its niche in a world where many other such titles already exist.

If you enjoyed this NyxQuest: Kindred Spirits review, you're encouraged to discuss it with the author and with other members of the site's community. If you don't already have an HonestGamers account, you can sign up for one in a snap. Thank you for reading!

© 1998-2021 HonestGamers
None of the material contained within this site may be reproduced in any conceivable fashion without permission from the author(s) of said material. This site is not sponsored or endorsed by Nintendo, Sega, Sony, Microsoft, or any other such party. NyxQuest: Kindred Spirits is a registered trademark of its copyright holder. This site makes no claim to NyxQuest: Kindred Spirits, its characters, screenshots, artwork, music, or any intellectual property contained within. Opinions expressed on this site do not necessarily represent the opinion of site staff or sponsors. Staff and freelance reviews are typically written based on time spent with a retail review copy or review key for the game that is provided by its publisher.