Convoy is a rogue-like strategy game where you shepherd a group of vehicles across an alien planet in search of spare parts. It is also a shameless rip-off of FTL: Faster Than Light. In fact, aside from the fact that this game is about land vehicles instead of spaceships, I couldn't believe that they were produced by different studios. The art style, music, and 8-bit user interfaces are all remarkably similar. This is not exactly a strike against Convoy, though. FTL was a great game, and if a winning formula works, it works, right? Though I suppose that is the question. Does Convoy make it work? I'm kinda undecided on that point.

The game's premise is simple enough. Your ship has crashed on a planet called Omek Prime, which happens to be populated by lawless factions that are constantly vying for power. Meanwhile, you just wanna get your ship repaired and get the fuck outta dodge. To find the parts you need to keep on truckin', you will navigate your convoy around the overworld map and track down various waypoints, parlay with locals, trade with camps to get additional fuel, weapons and vehicles, and occasionally stop to make repairs. You will also encounter radio signals worth checking out, or you can stick to the main path and get things done as quickly as possible. You can approach the problems you encounter as you like, either as a helpful saint or a heartless villain  it's up to you. 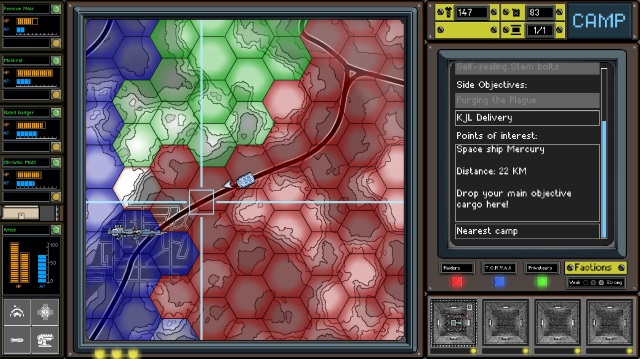 Unavoidably, you will also need to kill some bad guys, and when you do, you will experience Convoy's satisfying combat system. It is sort of a Command & Conquer-style interface, except that the view is always fixed overtop of your main vehicle (your "MCV") as it speeds along the road. Enemy vehicles will pull up beside it and try to destroy it, and you will need to deploy smaller vehicles to try and stop them. If your MCV dies it's game over, so it's important to prioritize your targets and maneuver your vehicles effectively around the MCV to protect it. Line of sight matters here, as certain weapons cannot shoot over other vehicles. You can also order your vehicles to ram into enemies, which can do a fair bit of damage or knock them off course into oncoming obstacles. In general, the combat is extremely well presented and highly tactical, though it can be hectic at times. Thankfully, it allows you pause the action to re-issue orders to your units whenever you need to.

I was also very impressed by the sound design. Your units will respond to you with radio chatter when you select them or give them commands, and this again reminded me of Command & Conquer. The voice acting is actually quite good here, despite how minimal as it is. Additionally, the sound effects for gunfire, explosions, missiles, etc., are all very well composed. 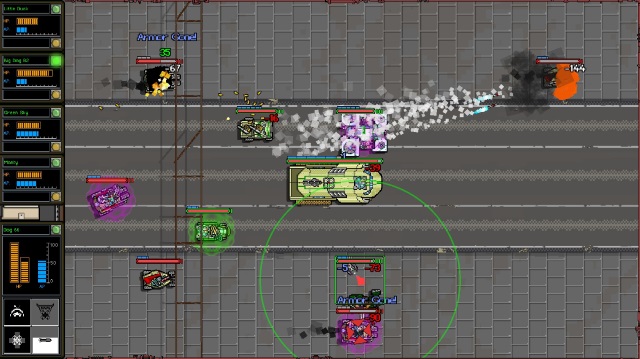 Once you've eliminated the bad guys, you will be able to salvage the wreckages of their vehicles and spend the collected parts on upgrades for your own fleet. This process is also quite satisfying. There are plenty of loadouts possible for your vehicles, and with some thought, you can make some really nasty creations. I got the idea to turn one of my jeeps into a melee-fighter at one point, and strapped some buzzsaws and chainsaws to it. I howled in delight as I watched it pull alongside an enemy and rip it to shreds. Another design I was proud of was a heavily armored missile truck with extended range mods, which I positioned directly behind my MCV so I could bomb enemies anywhere on the field.

That aside, this game is not without its problems. Notably, it relies far too heavily on RNG to determine the outcome of random encounters. You might be rolling along and minding your own business when suddenly a random event arbitrarily damages your vehicles (such as "Your scanners are picking up land mines ahead!"). Sometimes you can make a choice that affects the outcome, sometimes you can't. Some of these events feel like slot machines with very little user input aside from "Pick Option A" and "Pick Option B", both of which have a chance of bad consequences. 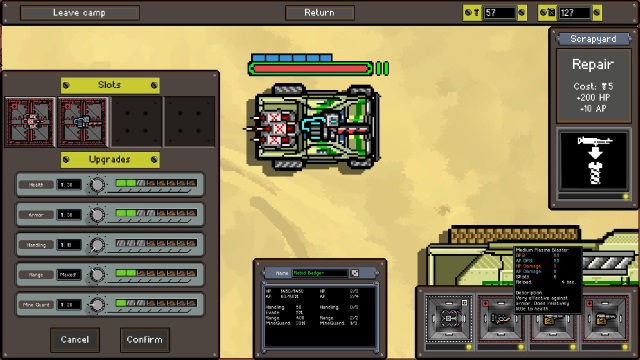 The primary objectives are not immune to this, either. When you start the game you will receive a set of randomly chosen tasks, each of which will enable you to get the components you need to fix your ship. Some of these are far more difficult to complete than others. For example, one of them involves stealing a component from a certain enemy warlord. If you are unlucky enough to be assigned this task, you will not be able to finish the game, period. That warlord and his swarms of minions are simply too difficult to defeat, no matter how well-equipped your convoy is. If you see that objective when you start a game, you may as well restart the game to re-roll the objectives right away.

Which brings me to my next gripe. Invariably, the reason you will lose a game of Convoy is because your MCV gets blown up, and this is because the MCV is ridiculously fragile. It doesn't matter if you've earned one of the better "prestige" MCVs that comes equipped with more health, shields, repair drones, or other bells and whistles. The MCV literally stands no chance against some of the boss encounters, and can easily be shredded in minor encounters as well. It doesn't matter how well you command your other vehicles or how fast you destroy the enemies; the bad guys will always prioritize the MCV over anything else, and it will always die before any of your smaller vehicles do. To make matters worse, the enemies will show up in increasingly overwhelming numbers as the game progresses. This alone pushes Convoy's difficulty into the "punishing" range, but not in any way that makes the game more fun or interesting. It's just frustrating. 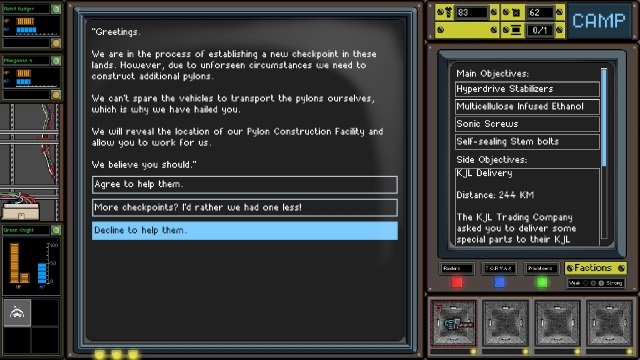 The story is also pretty weak. The developers definitely aren't going to win any awards for writing here. I even noticed some spelling and grammatical errors throughout. Still, the writing is about on par with FTL's overall. You will also notice a lot of obscure sci-fi references, many of which I didn't even get. Others, I was surprised I did. Remember the Star Trek: Deep Space Nine episode about the "Self-Sealing Stem Bolts"? Yeah. That's referenced in here, and I couldn't believe that I remembered it. There are also plenty of innocuously-named characters who are likely Kickstarter backers that paid enough money to be included in the game.

All things considered, Convoy does a lot of things right. It has an amazing soundtrack, an extremely satisfying combat system, and enough silly story bits to keep you entertained. Its biggest faults lie in its aforementioned reliance on RNG, which all too often destroys the player's long playthroughs. This is one of those games that doesn't respect your time very well, though it does a better job of this than some of the other "punishing" games out there. For comparison, FTL's playthroughs usually take an hour, while Convoy's weigh in at about double that. So if you are okay with having two hours of your time vanish in a puff of smoke, Convoy is probably for you. If not, you might want to steer clear.

Either way, Convoy is an impressive indie title for a lot of reasons and probably worth the full purchase price. I'm still glad I got it on sale, though.

If you enjoyed this Convoy review, you're encouraged to discuss it with the author and with other members of the site's community. If you don't already have an HonestGamers account, you can sign up for one in a snap. Thank you for reading!

© 1998-2021 HonestGamers
None of the material contained within this site may be reproduced in any conceivable fashion without permission from the author(s) of said material. This site is not sponsored or endorsed by Nintendo, Sega, Sony, Microsoft, or any other such party. Convoy is a registered trademark of its copyright holder. This site makes no claim to Convoy, its characters, screenshots, artwork, music, or any intellectual property contained within. Opinions expressed on this site do not necessarily represent the opinion of site staff or sponsors. Staff and freelance reviews are typically written based on time spent with a retail review copy or review key for the game that is provided by its publisher.