Broforce on PlayStation 4 is a bungled mess, but I still spent several nights playing it, determined to reach the closing credits so that I could be entirely fair when I finally reviewed the thing. This evening, I cleared what Wikia tells me is the fourth of five rounds with the final boss, but then the game crashed. To get back to where I was before encountering the fatal error that brought everything to a screeching halt, I would have had to complete something like 12 irritating stages all over again, with no guarantee that the game wouldn't then crash on me yet again. Screw that!

The idea behind Broforce is difficult to resist: you run and gun through something like 70 or 80 levels, blasting everything that moves, all in apparent homage to Contra and its ilk. Along the way, you pass flags that serve as checkpoints, and sometimes there's a mid-stage beacon you can trigger so you'll resume play from that location if you happen to lose your last available "bro." You can add to your army by freeing prisoners you find in cages, and each new addition to your roster comes with a distinct fighting style, special weapon and movement speed. 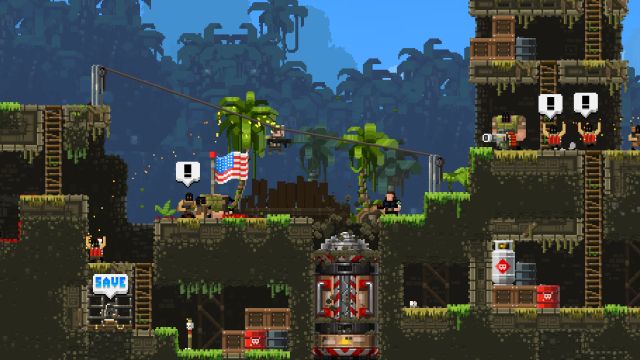 Finding and using new bros is unquestionably the best part of the game. The full roster is only available once you've played for a long while, and it's quite extensive. Bros are modeled after the heroes from virtually every explosive Hollywood blockbuster of the last 30 years or so, including riffs on a range of films so diverse that it includes Kill Bill, Aliens (not all of the "bros" are male), The Rocketeer, Braveheart, Predator, The Matrix, Indiana Jones--

You get the idea. There are a lot of bros. They love slaughtering innocents around the world, because they're Americans--even the ones that actually aren't, like the bro version of William Wallace--and that's what Americans do, the bastards! Three cheers for liberty, am I right?

Freeing bros is great, even if you despise their violent hearts, except that you immediately take control of whoever you rescue and there's no way to tell who that might be. So you could be running through a stage as the Indiana Jones facsimile, whipping enemies and swinging to distant ledges. That could well be ideal, but perhaps you're down to your last life and you'd like to give yourself a cushion. You free a guy from a cage and now you're running around and tossing bundles of dynamite, destroying the ledges you want to cross, incapable of easily dispatching enemies from a distance. There's no way to switch between characters in a manner that you meaningfully control. 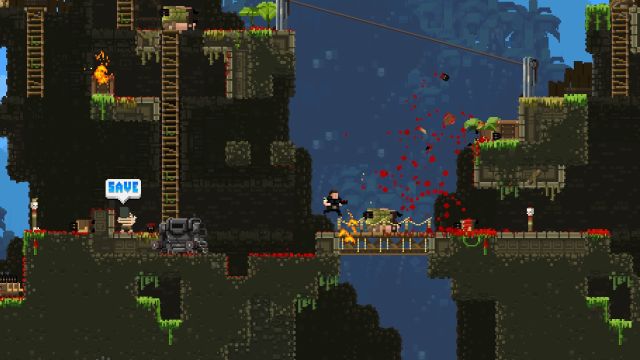 When you face the bosses, that setup morphs into a proper pain in the butt. Some foes will go down with barely a whimper if you are using Blade or Neo, who get in close and clean house. But if you're stuck with someone like The Terminator (who is called The Brominator or some such thing, to avoid copyright infringement charges), you can barely even shoot unless you stand still and hold down the fire button, which makes you a target for homing missiles and the like. Then when you do start blasting, you do a lot of damage but also have to fight against the recoil. It's exasperating. Sometimes, there's no option but to keep trying until random luck lets you play with a character who is actually equipped to deal with the current threat.

The gauntlets leading up to bosses, though generally friendlier to a variety of characters, sometimes are also more frustrating than they really should be, just because of how easy it is to die without even knowing what killed you. Mines litter the path. Enormous saw blades drop out of hidden hatches and cut you to ribbons. Missiles rain down from the sky. Enemies on distant ledges shoot when you try to jump a gap. And later on, you'll run into extraterrestrial monsters that spit acid and launch at you from pods. Finally, you will find explosives lying all over the place, even in the early stages. It's easy to set off a chain reaction that you didn't intend, which forces you to dodge falling debris and hot water heaters that launch at you and a whole host of other hazards. In Broforce, the environments want to kill you and will very possibly get their wish many, many times.

I don't mind a difficult shooter every now and then, and you probably don't, either. But the PlayStation 4 version of Broforce has issues that--from what I can tell--are specific to the port and don't mesh well with the already demanding gameplay. The frame rate drops at odd moments, for instance, which makes it far too easy to fumble a jump just when the tension is most severe. A missed leap can often prove fatal. And when you continue from a checkpoint after losing a life, you'll be able to start running and gunning for several seconds. Then, for no apparent reason, your hero will stand still for a moment before you can resume. This sometimes leads to cheap deaths, and it is especially irritating in a sequence near the very end of the game when you have to outrun an approaching wall of wicked light and every split-second counts. 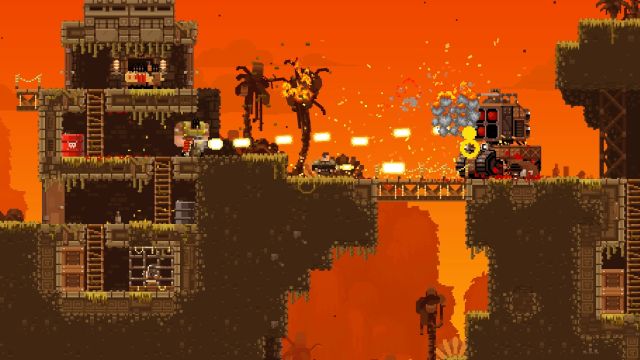 Load times are another recurring issue. As you advance from one stage to the next within a mission, you'll sometimes have to wait for what feels like 30 or 40 seconds, with only a black screen for company. Sometimes, I wondered if the game had frozen on me. But no, that was just Broforce doing its thing. Eventually, the next stage would begin.

In case you tire of the single-player content, there's also an online mode available. Up to four players can band together to ruin small countries together, once enough warmongering bros are freed from cages, and that experience could probably be a real blast. I say it "could" because the lag in such matches is ferocious. I've played a fair few other online games and never encountered such issues. In Broforce, I would load a match and then wait several seconds before my character would even appear. Then the other players would warp around the screen while the frame rate stuttered and general mayhem ensued. Sometimes, I could even play for a few seconds, but I finally stopped trying to find a good game because half the time I joined, the map either froze or the host appeared to have given up on the match.

As I write this review, Broforce is available to PlayStation Plus subscribers as a free download. That feels like the right price to me, and I don't suppose there's any reason you shouldn't go ahead and add it to your library. Maybe the developers will release some patches down the road and fix the numerous issues that plague the title at launch. Perhaps the game will someday even become a pleasure to play. It certainly doesn't fit that description right now, though, and that's a shame. Maybe download the PC version instead?

If you enjoyed this BROFORCE review, you're encouraged to discuss it with the author and with other members of the site's community. If you don't already have an HonestGamers account, you can sign up for one in a snap. Thank you for reading!

© 1998-2021 HonestGamers
None of the material contained within this site may be reproduced in any conceivable fashion without permission from the author(s) of said material. This site is not sponsored or endorsed by Nintendo, Sega, Sony, Microsoft, or any other such party. BROFORCE is a registered trademark of its copyright holder. This site makes no claim to BROFORCE, its characters, screenshots, artwork, music, or any intellectual property contained within. Opinions expressed on this site do not necessarily represent the opinion of site staff or sponsors. Staff and freelance reviews are typically written based on time spent with a retail review copy or review key for the game that is provided by its publisher.