Year Walk is an independently produced point-and-click title about a hallucinating man who is chasing after a key. There's more to it, of course, but efforts to obtain the elusive object do make up the bulk of the campaign. You see, Year Walk is based on a Swedish vision quest upon which our hero has embarked. His goal is to glimpse the future, which he can only do by first stumbling around the cold, forbidding woods whilst trippin' balls and encountering various supernatural beings.

Year Walk's one major merit is the way it incorporates terrific, malevolent visuals. I never thought I'd say this about a game that primarily utilizes a ton of gray, black and white tones, but it has a wonderfully nightmarish quality. The Swedish forest that serves as the central setting is fittingly desolate and lonely. The lack of wildlife or fellow humans quickly gives way to feelings of isolation and vulnerability. 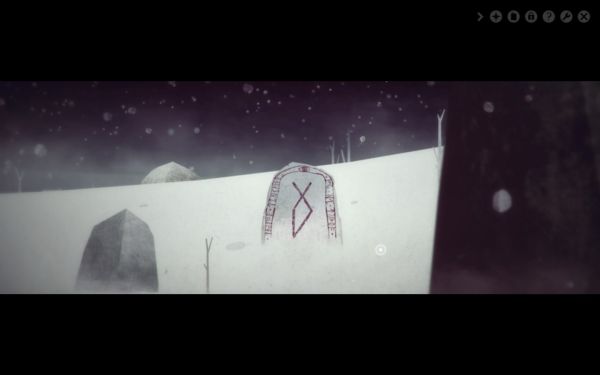 That's all perfect for an adventure that focuses on hallucinating and running afoul of various creatures whose intentions may be less than pure. You want to trust them, but you know that their desires could run counter to your cause, moral code and well-being. The brook horse, for instance, wants four wayward, unbaptized baby spirits called mylings in exchange for a key. To those unfamiliar with Swedish folklore, this demand seems downright insidious. However, you could always tell yourself that he means to assist the ghostly tykes rather than harm them, and that might even be true. Just the same, it's difficult to escape a lingering suspicion that delivering spectral children to the equine phantasm will sully your hands.

Unfortunately, Year Walk's creativity isn't enough to mask its flaws. For starters, the game doesn't spin much of a yarn. Horror works best when there's an actual story unfolding along the way, rather than a series of arbitrary occurrences that revolve around an obvious MacGuffin. The game's quest line sends you on a goose chase that appears to exist for the sole purpose of padding a shallow campaign. There isn't more to the tale than a call for you to meander from one haphazard locale to another, whilst completing loosely associated puzzles. Worse yet, Year Walk only lasts about an hour even when you factor in all of that busy work. Call me crazy, but I feel a title that short shouldn't rely on insubstantial content to produce a false sense of longevity. 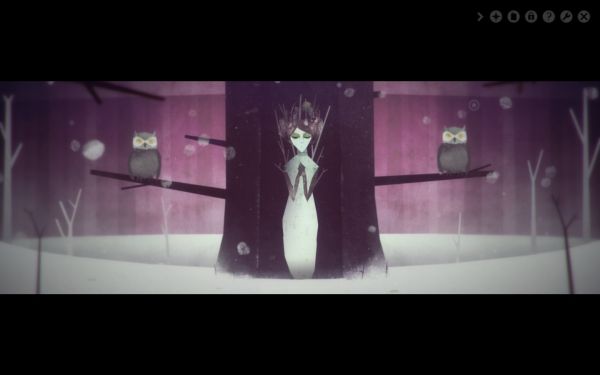 It also doesn't help that the game's puzzles are ho-hum at best, and tedious at their worst. Clues to solutions are vague enough, initially. You might think, "Oh, this ought to be a clever riddle!" Sadly, the puzzles are eventually revealed to be either overly simplistic or just tiresome. For instance, you obtain one hint by entering a shack and watching a creepy doll dance. Occasionally, she lifts an arm and points to a drawing of an owl. When you stumble upon a puzzle featuring two interactive owls elsewhere in the forest, solving it should be a snap.

There's also one challenge at the church's gates, in which you must lift gravestones to reveal columns of dots. You can surmount this one via process of elimination, without even bothering to examine the in-game hints provided. Doing so might actually prove less laborious than wandering around the forest until you spot each grave's symbol etched on certain trees. Every emblem you find in that manner then has another flippin' symbol hiding underneath it. You then get to carry a light source (of spoiler origins) to a pitch black storage unit. There, you'll find the second set of runes positioned next to dots. Hopefully, you either have an astute memory or perhaps some scratch paper nearby. I'm not against memory-based challenges, but adventure titles tend to work best when they strike a balance between those and the more logic-based fare for which the genre is known.

Of course, if you still can't overcome the riddle, you can always consult overly helpful tips in the menu section that spoil each segment. Since Year Walk has no in-game currency or freemium elements (and thank goodness for the latter's nonexistence), there's nothing stopping you from viewing every hint and spoiling the entire experience as you progress. 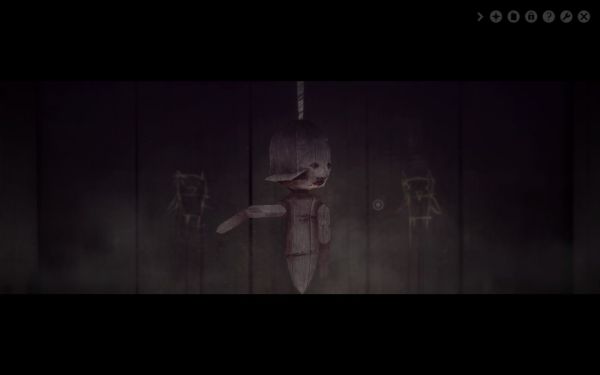 I've harped on Year Walk for most of this review now, but I must admit that it is a bold project. We're living in an era when experimentation has become normal within the medium, however, and Year Walk's uniqueness doesn't warrant a recommendation all by itself. With that said, I do appreciate the developer's effort in crafting the title. Pushing boundaries is always cool, and that's what the developers did here, both in a visual sense and in terms of all-around design.

I suppose that leaves me to award Year Walk a weak recommendation, in spite of some of my issues with it overall. I certainly don't caution against playing the game, but do keep in mind that there are myriad superior adventure titles available across several digital marketplaces. Heck, some of them are even free. Should you find Year Walk offered at a bargain price during a Steam sale, though, it's worth a look.
3/5

© 1998-2021 HonestGamers
None of the material contained within this site may be reproduced in any conceivable fashion without permission from the author(s) of said material. This site is not sponsored or endorsed by Nintendo, Sega, Sony, Microsoft, or any other such party. Year Walk is a registered trademark of its copyright holder. This site makes no claim to Year Walk, its characters, screenshots, artwork, music, or any intellectual property contained within. Opinions expressed on this site do not necessarily represent the opinion of site staff or sponsors. Staff and freelance reviews are typically written based on time spent with a retail review copy or review key for the game that is provided by its publisher.