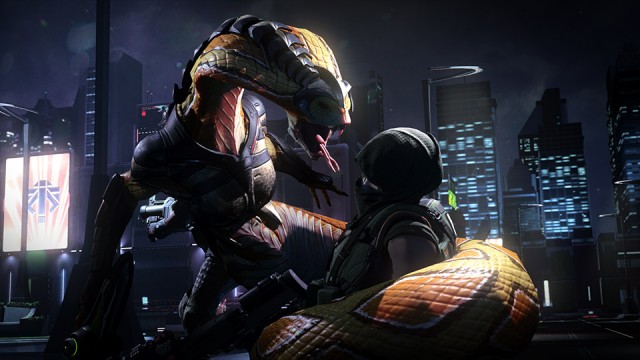 I just conducted an experiment in XCOM 2. I was in the middle of a match, and the game told me that when I move a particular soldier to a particular space and aim at a particular enemy, she's got an 80% chance of making the shot. I saved, ordered the action, rebooted, and repeated, enduring some rather nasty load times in the process. I did this ten times, so math dictates that my soldier should have landed eight of those shots. Naturally, she missed all ten of them.

Don't get angry with me yet, because I think that's fair enough. Whatever calculations XCOM 2 uses to determine a unit's success or failure aren't made on the spot; they run deeper than that. I assume that developer Firaxis implemented such a system as a way of counteracting save scumming, so players can't just reload files endlessly until they get the results that they want. They want you to suck it up and deal with your losses. I can get behind that. What I can't get behind is a developer taking such a stance and then designing a game in which mistakes are unacceptable and can potentially cost you dozens of hours of your life.

Basically, what I'm saying is that XCOM 2 is unfairly difficult. Okay, now you can get angry with me.

It took me 48 hours to complete XCOM 2, which strikes me as too great a time investment to simply be wiped unceremoniously wiped clean if you're not running at the pace that Firaxis wants you to keep. That is, of course, the point  the "campaign" is more like a feature-length match in an empire-building game, where the tactical combat plays window dressing to a conflict that's broader in scope, where the humans are organizing a global effort against the alien takeover. While there is a series of objectives, most of the content is procedurally generated and can be approached at whatever pace you can afford. More importantly, it's possible to outright lose. 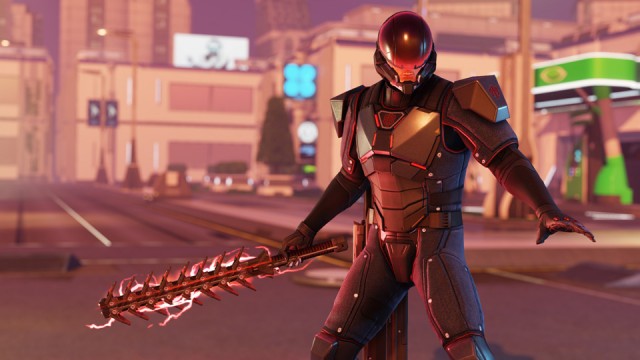 In the rebooted XCOM: Enemy Unknown  which, for the record, I quite enjoyed  players had to deal with dwindling resources as major nations lost faith in the program and dropped support. It was a very feasible tumble down a hole which became harder and harder to climb back out of. XCOM 2's limitation is a bit less subtle: a timer at the top of the screen. Income is theoretically infinite this time, as lost territories can be regained, but the aliens are now working on something in the middle of the Pacific called the Avatar Project. If it's completed  i.e. if the meter above the command room screen fills  the game is over.

So we now have a far more concrete fail state hanging over a significantly longer, more challenging campaign, and that's a problem because the tactical stuff feels just as unfairly weighted as before. Enemy Unknown had two huge issues with its combat: the accuracy percentages were way off, and every alien was granted a free move when you first came within visual range of its location. I forgave those flaws several years ago, but XCOM 2's difficulty spike is so much sharper that they have evolved from minor annoyances to severe imbalances, since they can reverse a lot of time and effort unless you're reloading an autosave every time something goes wrong.

To illustrate the stakes here, any soldier killed in battle is lost forever, and well-trained soldiers are really valuable in this game. It took around 20 hours for one of my starting units to fill its tech tree, and those class skills are absolutely crucial in holding the upper hand; once it's established that these people can't shoot to save their lives, good luck winning decisively if the grenadiers aren't tearing down walls and the specialists aren't hacking mechanized enemies. New recruits start at ground level, and it's not like alien tech slows to give you a chance. Losing just one important unit is a major setback; allowing even one mission to go sour is essentially a death sentence for your entire campaign.

XCOM 2 made me angrier than any game has in quite some time, mainly for the arbitrary injustices it frequently dishes out. Why does a trained soldier only have a 60% chance of hitting an open target that he's standing only three or four squares away from? Why must I perform extensive research to deploy more than four troops in a mission when I can plainly see a couple of open seats in the transport craft? And for the love of god, if I miss a critical shot, why does this game frequently torture me by showing the bullet clipping right through the target anyway? I've often seen blood effects trigger after failed attacks, and that's just cruelty. 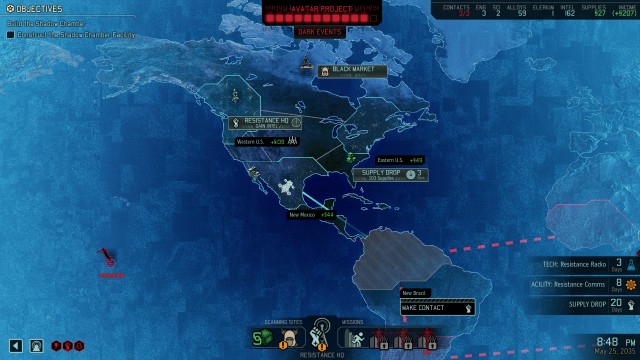 What's worse is that XCOM 2 seems to have been designed specifically for people who just got done with Enemy Unknown and don't need a refresher on the basics, because man, this thing beats you in the face from the word go. By just the second mission, I was expected to lead my outnumbered squad to victory while facing an enemy group that included multiple brain-affecting sectoids. Here's what that means. Let's say I've got a squad of four, and I'm battling a squad of eight, which includes two sectoids. Both of them get the jump on me because they're granted a free move when they're first spotted. One sends a soldier into panic; one controls another soldier's mind. Both feats are accomplished within a single enemy turn. Suddenly, this four-on-eight battle has become three-on-nine, and this is before I've even figured out how upgrades work, let alone had time to research and implement them.

That's not even taking into consideration the nightmarish new enemy types that Firaxis has introduced. By the end of the campaign, you're taking on acid-flinging robots that rise from the dead after you've killed them the first time, apparitions that clone themselves every time they take damage, and shapeshifters masquerading as humans you're supposed to be saving. Making matters worse, a fair number of missions are now timed.

I still enjoy the metagame portion of XCOM, at least when the game isn't pissing me off this much. Having to stomach your losses works well in plenty of other strategy games with persistent squads  like Fire Emblem and Homeworld, to name two other series that had new entries this year  and the pressure of not being able to respond to every alert worked wonders in Enemy Unknown. It's a perfectly valid decision not to pursue each individual threat, because maybe your squad is still licking its wounds from the last encounter and you figure, screw it, we'll just rest up and deal with the repercussions when we can. That's a great dynamic when the core game is properly balanced. XCOM 2, unfortunately, is not.

I did finish XCOM 2, but doubtless plenty of people will read this review and assume that I dislike this game because I'm terrible at it. I disagree, but let's conclude with a point that's not open for debate: that XCOM 2 is an absolute technical catastrophe. 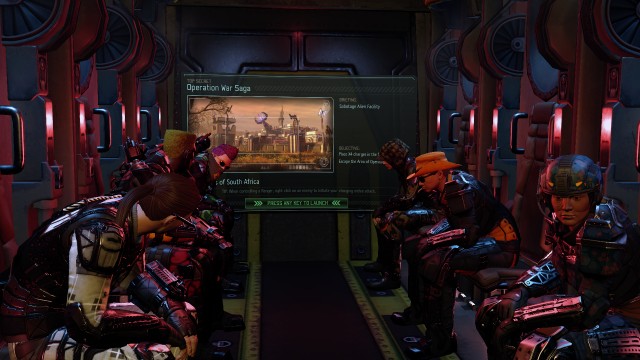 I know plenty of people who enjoy this game, but I've not talked to a single person who's actually been able to get the thing running properly. What's odd is that while Enemy Unknown has gained the series a massive following and this is the sort of game that works absolutely fine with a controller, 2K elected to make XCOM 2 a PC exclusive. You'd think that this would focus Firaxis's efforts into making the game a smooth experience on the one platform for which it's available, but XCOM 2 is a sputtering mess  unusually so for a title in which not much is ever happening at once and all of the action is viewed from a great distance. I cannot for the life of me come up with an explanation for why XCOM 2 runs this poorly.

The excuse I keep seeing is that XCOM 2 is a turn-based strategy game and thus requires no reflex. That's true; most video games with performance issues of this magnitude would be outright unplayable, whereas this one is simply headache-inducing to look at as its framerate sinks to single-digits even after the graphics settings have been cranked all the way down (on one of the most powerful mainstream video cards on the market, I'll add). It simply puts you through unbearably long load times and simply pauses inexplicably for long stretches mid-battle.

Late in the campaign, the game got so bogged down trying to keep up with the explosions and crumbling environments that animations seemed to stop triggering altogether; characters would just teleport to where they needed to be, and units would unceremoniously lose health when attacks were supposed to be unfolding on-screen. So yes, XCOM 2 is technically playable, but unfortunately, a game not being a scam doesn't propel it past the bottom end of my rating scale. Not when a game is this unpleasant to play, and not when I'm constantly stressing out about losing dozens of hours that I could have spent on something that actually rewards the time I sink into it.

If you enjoyed this XCOM 2 review, you're encouraged to discuss it with the author and with other members of the site's community. If you don't already have an HonestGamers account, you can sign up for one in a snap. Thank you for reading!

© 1998-2021 HonestGamers
None of the material contained within this site may be reproduced in any conceivable fashion without permission from the author(s) of said material. This site is not sponsored or endorsed by Nintendo, Sega, Sony, Microsoft, or any other such party. XCOM 2 is a registered trademark of its copyright holder. This site makes no claim to XCOM 2, its characters, screenshots, artwork, music, or any intellectual property contained within. Opinions expressed on this site do not necessarily represent the opinion of site staff or sponsors. Staff and freelance reviews are typically written based on time spent with a retail review copy or review key for the game that is provided by its publisher.