I've come to accept that I simply missed the boat with X-COM: UFO Defense. It was released in that awkward period when a game could be that complex but couldn't be bothered to include an in-game tutorial or have much in the way of a plot, and trying to catch up on it 15 years later  as I did  proved disappointingly unwelcoming. What are all of these buttons for? What am I striving towards, exactly? I didn't know what I was doing and, perhaps more importantly, didn't care enough to brave the game's seemingly monstrous difficulty curve. I don't question the game's greatness or importance; I question my ability, as a relatively young gamer, to appreciate it.

The dash-omitting XCOM: Enemy Unknown purports to be an homage to the original 1994 release, and I'm obviously in no position to declare whether or not it's faithful. I am in a position, however, to say that it's deep, exciting and absorbing entirely on its own terms, so if it is a loyal tribute to the series, then I finally get what all of the fuss is about. 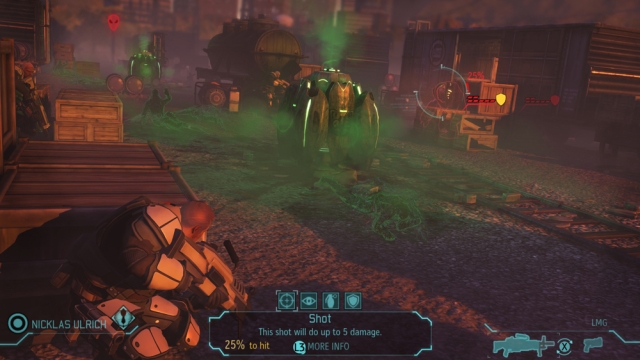 It's a tough sell, too, because the actual turn-based tactical element is little more than sufficient. The seemingly limitless number of maps and much-appreciated variety in enemy types and behavior certainly keep things fresh, but there are an awful lot of line-of-sight quirks that often result in units firing through solid objects or, conversely, not being able to attack targets they can clearly see. Enemy Unknown is also weirdly unintuitive with a mouse and keyboard, with menus feeling unresponsive and camera controls a relative crapshoot all around. For a franchise with firm PC roots, it's a bit cruel that this particular entry seems designed specifically for controllers.

Where Enemy Unknown really sinks its claws into you, though, is when it pulls back the grid-based exterior and exposes the buzzing machinery underneath. The tech trees that most strategy games limit to individual matches are here expanded upon and relegated to their own separate chunk of the campaign, as nearly half of your time playing Enemy Unknown will be spent back at XCOM headquarters, monitoring finances, seeking out threats and staying up to date with the latest technology. There are only a handful of story-based missions in Enemy Unknown; the vast majority of the battles are randomly-generated, and the rest of your time is spent ensuring that you're fit to keep up. Alien devices and corpses are examined for new technological developments, scavenged parts are used to build new weapons and equipment, and money you've earned goes toward expanding your operations, both on-site and worldwide.

This all does an excellent job of putting the on-foot encounters into context. I wasn't winning battles just to advance the story (which is bare-bones and negligible, anyway); I was doing it to manufacture more heavy lasers, or to secure enough credits to build another power generator, or to just pull a particular country out of tumult. All of the nations funding the XCOM project have individual panic ratings, and if any of them go unaided for too long, they'll pull their support. In a rather devilish move on developer Firaxis's part, you'll often get alerts about several abduction sites at once and only be permitted to respond to one of them. Saving one country, then, often means sentencing two others to further distress. Protecting the world isn't always easy. 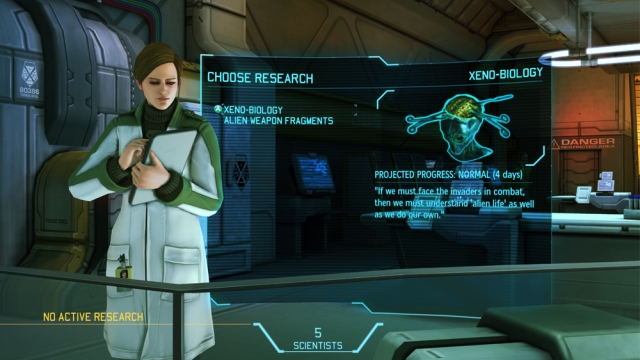 The hook is that nearly everything you do in Enemy Unknown requires in-game time to complete. It takes about two weeks to get a satellite uplink operational, 20 days to build the satellite itself, and several more just to get it in orbit; under dire circumstances, the country you were trying to monitor and aid could very easily have turned into a no-man's land by the time you got the damn thing in the air. Any soldiers so much as injured on the field have to spend several days recovering, so if you happen to get two alerts in a small period of time and most or all of your best infantry are benched, you either have to respond with a second-tier team or ignore the call altogether and risk letting that part of the world fall into chaos.

What I love about Enemy Unknown is that it teaches you how to play without teaching you how to win. The basics of setting research goals, excavating for base expansions and keeping a keen eye on the well-being of the planet from a single holographic globe are all explained thoroughly, but the game leaves it up to players to discover just how quickly you need to get a grasp on this stuff, and how rigidly you need to keep up in order to hold the campaign's sharp difficulty curve in check. You may feel perfectly at ease having a seasoned, well-rounded squad equipped with the latest weaponry and enough workshops and laboratories to keep the your technological findings up to date, and then the game says, "Whoops! Did you forget to upgrade your interceptors? Because now there's a UFO over Russia that you're not equipped to take down, and transferring or manufacturing more jets will take more time than you have. Oh, and the craft is going to shoot down your satellite. Oh, and Russia will pull its funding if that happens."

See, the lesson behind Enemy Unknown is that you can permanently screw yourself over. Soldiers who die on the field stay dead, and regions that pull their support from the XCOM project don't come back. The alien threat rises steadily to the point of throwing psychics and armored mechs at you in the game's final act, and if you happen to fall behind in any particular area  training, weaponry, expansion, whatever  Enemy Unknown certainly doesn't pause to give you a chance to catch up. I had to restart 11 hours into my first campaign after backing myself into a no-win scenario, and the fact that someone as easily frustrated as myself would eagerly jump back in rather than give up demonstrates just how enticing the game's often brutal challenge is. 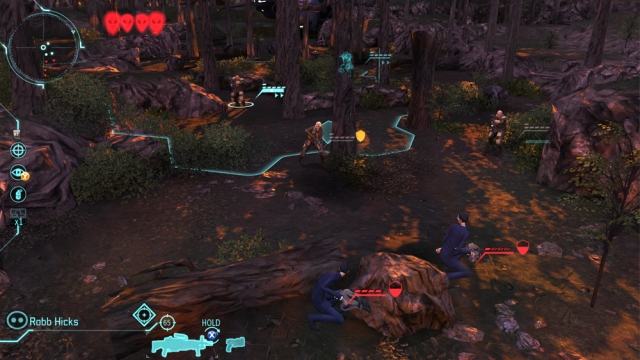 Well, okay  it's not always totally fair. One thing that bugged me to no end was that aliens are always granted an extra move whenever you initially spot them. It's not generally as big a deal as it sounds, but one enemy, the Berserker, is extremely well-armored and does an absurd amount of melee damage should you allow it to get close enough, and the fact that it was able to help close the gap between itself and my team via an extra turn was infuriating. That, coupled with the line-of-sight quirks that often enable cheap shots, will often make you storm out of the room.

Usually, though, your failings are either your own fault or blind luck, and I'm okay with that. Mistakes are harsh but important lessons, and watching risky plans go awry when an enemy scores an ill-timed critical hit is worth it for all of the moments in which everything miraculously comes together. Your sniper will land a match-winning headshot from across the map, or your medic will resuscitate one of your dying squad members at the last second, or you'll realize that a cluster of Mutons are positioned right where your heavy weapons guy can take them all out with a single rocket. And when you're really on top of things, it's a tremendous relief to walk into your situation room and see the worldwide panic rating unthreateningly in the blue. Moments of peace are all the more rewarding in Enemy Unknown because you have to work hard for them.

I mentioned that Enemy Unknown doesn't have much of a plot, and that's true; its skeleton crew of three characters serves no purpose but to give you objectives with little to no dramatic weight. It's almost disappointing, but then Enemy Unknown is the rare game these days that can stand on its own two legs without any help in the narrative department. It's a challenge, but it's the good kind, one that rewards for heavy brainwork and punishes for negligence. It has issues, but it's deep and engrossing in ways most games these days aren't, and it manages to make the upcoming shooter spinoff look even sillier and more irrelevant in comparison.

If you enjoyed this XCOM: Enemy Unknown review, you're encouraged to discuss it with the author and with other members of the site's community. If you don't already have an HonestGamers account, you can sign up for one in a snap. Thank you for reading!

© 1998-2022 HonestGamers
None of the material contained within this site may be reproduced in any conceivable fashion without permission from the author(s) of said material. This site is not sponsored or endorsed by Nintendo, Sega, Sony, Microsoft, or any other such party. XCOM: Enemy Unknown is a registered trademark of its copyright holder. This site makes no claim to XCOM: Enemy Unknown, its characters, screenshots, artwork, music, or any intellectual property contained within. Opinions expressed on this site do not necessarily represent the opinion of site staff or sponsors. Staff and freelance reviews are typically written based on time spent with a retail review copy or review key for the game that is provided by its publisher.