You might have played a number of "Metroidvania" games over the years, but when's the last time you played one that drops you in the shoes of a rabbit who wakes up in an abandoned building and finds that she has somehow turned into a human girl with bunny ears?

I'm guessing it has been a while.

Rabi-Ribi, a new platformer from Sekai Project and its Taiwanese developer, CreSpirit, features the precise scenario I described above. Your name is Erina, and for some reason you are dressed in a purple swimsuit. Over the course of around 15 to 20 hours, you'll run, double jump, fly, and dash your way around a sprawling island environment, doing battle with all manner of scantily-clad women as you try to-- You know what? I'm not sure exactly what you're trying to do. But I do know that it's fun, most of it. 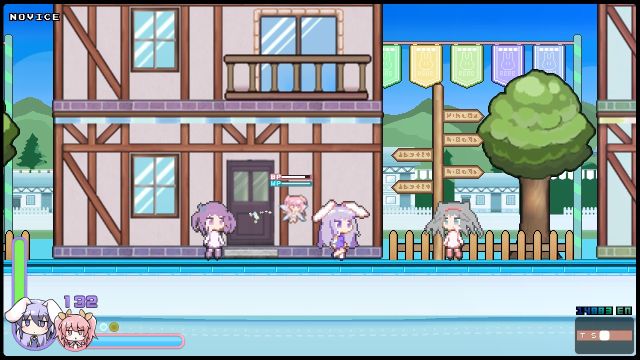 The game helpfully features an area hub that you should encounter within your first few minutes of play. There, you can buy supplies at the local shop--including character upgrades and ability boosts--and you can meet with key characters who offer up broad assignments. These tasks are tracked by a "Diary" feature. Areas of local interest are pinpointed on maps that automatically populate as you wander outlying regions. Generally, this setup gives you somewhere to head next if you want to advance the convoluted plot, but you're also encouraged to explore far and wide when the mood strikes.

As in a Metroid game, you'll find additional upgrades hidden away in unlikely nooks and crannies, which you can access by dropping carrot bombs to blast weak walls and floors, or by swinging your hammer to break apart blocks. Especially at the start of the campaign, you'll often find that you must return later, because a ledge is too high to reach with your current abilities, or a gap too wide. Time spent searching is never wasted, though, because you might discover a portal that lets you return to an area within seconds--just when you need to most--or you could snag health and attack upgrades that make it easier to face a boss against whom you have been struggling.

Boss battles in Rabi-Ribi occur with surprising frequency, and typically they feel like something out of a Mega Man game, with a little bit of Gradius thrown in for good measure. Many of your fiercest foes rely on intricate patterns that send bullets flying everywhere, so you'll have to get good at dodging waves of shrapnel while you wait for an opening to do some damage of your own. This usually works just fine and makes for suitably intense confrontations, but some of the later bosses and especially the final foe take it a bit too far. A lot of fights don't last long when you're playing properly, but then some come along and eat up 10 or 15 minutes. Failing in one of those rare cases really hurts. There are a bunch of achievements available that reward you if you manage to survive a given boss fight without taking any damage, but good luck with that! 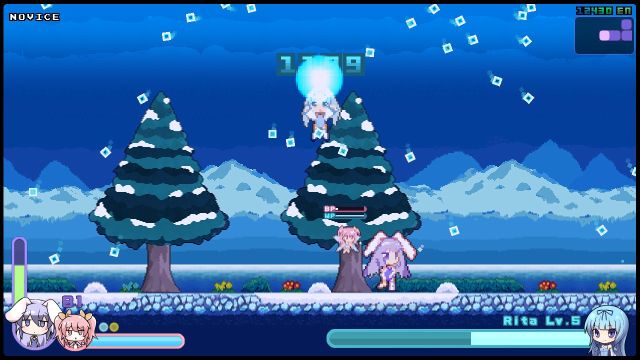 Fortunately, the plucky heroine has more going for her than just her anime-style good looks, and that's doubly true once she meets a new friend named Ribbon, who is a flying fairy. Besides doing the usual things like jumping and dashing and sliding around the world, Erina can equip elemental wands that the fairy then uses to unleash a world of hurt on any opponents. One rod fires a persistent beam of light. Another sends out explosive charges. My favorite drains energy from foes as you damage them, which sometimes lets you keep exploring when otherwise you'd have to retreat to a save point for a free energy refill. Before long, you'll make the island your playground.

The game felt awkward to me at first, though. Jump controls are fluid enough, but they are overly responsive and thus demand a level of precision that doesn't come quite naturally once you factor in wall jumps, air dashes and double jumps. Sometimes I would leap from a ledge and then try to jump again mid-air, only to find that the game thought I already had two jumps counting against my available total of... two. Down I would fall through an opening, potentially to an area far below, which meant finding a way to warp back to the zone I had been exploring and then backtracking for another attempt at the gap. Very late in the game, you'll need to make some ludicrously complex leaps to navigate spike-lined corridors and dart through savage laser beams. It's a tedious and punishing gauntlet, rather than the exhilarating adventure the developers must have had in mind.

Fortunately, the game's controls are perfectly suited for most other challenges you'll face, and the world you get to explore is attractive thanks to a vibrant color palette and simple designs. Nothing you'll see competes directly with some of the visual stunners that exist within the genre, but each new environment looks distinct and that feel is helped along by a pleasant soundtrack full of great tunes. 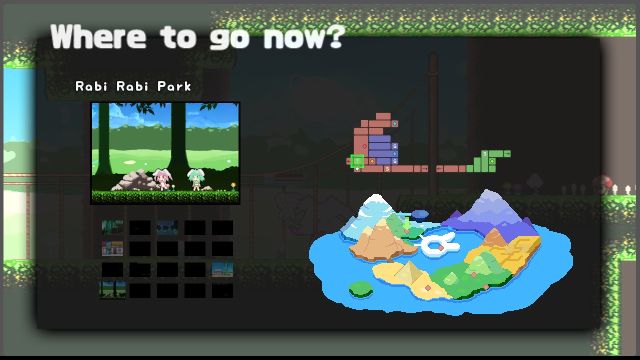 I mentioned near the start of this review that the game gives players a lot of freedom to explore, and for the most part, it doesn't leave you without guidelines when you need them. There are exceptions to that rule, however. Figuring out where you're supposed to go is still exasperating at times because you have to guess at the route and it's easy to guess wrong a time or two. For example, you might have cleared the bottom center and upper left quadrants of a map, but there's a region you need to reach to the upper right and you don't know how to do so except with a lot of trial-and-error. Potentially, you'll have to approach from some other region that you haven't even touched, which itself might not be accessible from any zone you've yet reached, so it sometimes feels like you're in a rudderless ship adrift at sea, even when you do have general guidelines. Then, near the very end of the campaign, you also have to find an encounter or two--somewhere on the island--that doesn't come with an accompanying marker. I spent several hours wandering about, picking up the occasional upgrade I had missed up to that point, before I finally had to ask around online and managed to find someone who could tell me what to do next. I wish the game had done me a favor and offered me more helpful advice toward that end, but at least Erina grew stronger in the process.

In spite of my few complaints with Rabi-Ribi, though, I did mostly enjoy my time with the game. It starts out simple, but builds naturally into a complex beast that should challenge even genre veterans. And if it doesn't do that for you by default, you can always crank up the difficulty to absurd levels, or try for some of the absolutely bonkers achievements. There are an unusual number of boss battles (plus a special Boss Rush mode you can unlock, among other attractions), and most of those fights are quite engaging. The story may often be an often indecipherable mess, but you'll typically know what you're expected to do next and the freedom to venture off the designated trail and find your own adventures is a nice gesture from a genre that too often presents players with rigid paths of progression.

Based on my own experience, my guess is that other platformer and adventure fans will find a lot to like in Rabi-Ribi, as long as they're willing to overlook the cutesy anime vibe. Or heck, maybe they even like that sort of thing. I'm certainly in no position to judge!

If you enjoyed this Rabi-Ribi review, you're encouraged to discuss it with the author and with other members of the site's community. If you don't already have an HonestGamers account, you can sign up for one in a snap. Thank you for reading!

© 1998-2021 HonestGamers
None of the material contained within this site may be reproduced in any conceivable fashion without permission from the author(s) of said material. This site is not sponsored or endorsed by Nintendo, Sega, Sony, Microsoft, or any other such party. Rabi-Ribi is a registered trademark of its copyright holder. This site makes no claim to Rabi-Ribi, its characters, screenshots, artwork, music, or any intellectual property contained within. Opinions expressed on this site do not necessarily represent the opinion of site staff or sponsors. Staff and freelance reviews are typically written based on time spent with a retail review copy or review key for the game that is provided by its publisher.