I'm of the opinion that over the last 30 years or thereabouts, Nintendo has done a better job than any other developer of keeping its main franchises relevant, at least as far as creating excellent games goes. Take Mario, for example. There is some junk branded with his name (Mario is Missing, anyone?), but the good far outweighs the bad.

When it comes to Mario's action games, you can safely bet that if the words "Super Mario" appear within a title, the game will receive a lot of praise. Even a title that doesn't necessarily wow critics, such as New Super Mario Bros. 2 for the 3DS, wasn't actually considered bad. Instead, it received criticism for being good without offering much in the way of new ideas after the initial New Super Mario Bros. before it. In other words, the second outing was too much of a good thing, rather than an improvement.

That summary could accurately describe the Game Boy's Super Mario Land, as well (with some reservations, of course, since the "good thing" this game followed was the original Super Mario Bros. on the NES). That older game is legendary due to its influence on the platformer genre, but I'd rank it just about last on the list of Super Mario games I care to play today. It's still a fun game, sure, but its age shows. Far simpler than the sequels to which it led, it's missing hordes of familiar power-ups and foes. By today's standards, it's a bit of a relic. 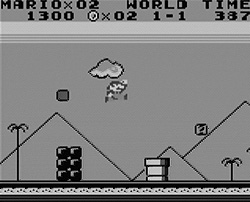 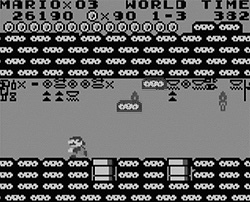 What, then, does that say about Super Mario Land?

Imagine taking Super Mario Bros., going from 1985 to 1989, making a few changes and dramatically scaling things down. Then you have a general feel for things. The first Game Boy outing for the famous plumber was also the first Mario game to be developed without Miyamoto's direct involvement. That seems to have led to some interesting changes, such as Mario's departure from the Mushroom Kingdom in favor of a place known as Sarasaland. The change in location also meant a different princess to rescue, and old power-ups now do somewhat new things. The first level's boss is a sphinx who fights just like Bowser did once upon a time, stomping on turtles turns them into bombs that will harm you if you don't get away quickly in time, and the fire flower now gives you a ball attack that bounces around the screen if you miss your target.

Other elements are more familiar. Though many of the enemies have different names for some reason, you'll recognize critters that look like Goombas, Koopas, and Piranha Plants. A big part of clearing levels is the collection of coins to earn bonus lives, and many of the pipes scattered through stages are conduits to secret rooms loaded with currency. You start small, grab a power-up to become big, and then snare another to shoot a projectile. While some things are different, odds are that if you played Super Mario Bros. with any frequency, much of this game will feel like returning home.

Well, except for two levels. There are four worlds in this game, each consisting of three levels. The final levels in the second and fourth worlds eschew the usual platforming, instead putting Mario in a vehicle for some horizontally-scrolling shooting action where you'll gun down enemies and, eventually, that world's boss (all while collecting coins, of course). So, there you have it -- one-sixth of this game is original and the rest is a slightly altered take on classic Super Mario Bros.. 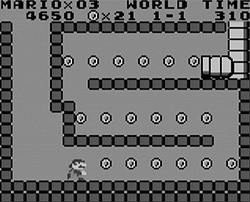 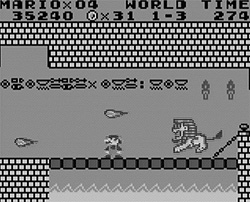 And it's a slightly altered take that plays out on a sparsely decorated screen. Super Mario Land was released very early in the Game Boy's life cycle, and it shows. The system did eventually feature games that looked pretty good, especially considering the hardware limitations, but this one isn't really one of them. Characters are tiny and there is too little detail to the simplistic graphics. Environments are cut-and-pasted to unholy levels. You'll go through a particular assortment of platforms in a level and then find yourself navigating that same grouping a few screens later.

Here's the thing: I can respect what this game is: the first hand-held Super Mario title. By releasing it, Nintendo was able to give a certain degree of legitimacy to the Game Boy, essentially saying that players could have a portable, small-screen substitute for the NES while away from home. And guess what? The Game Boy was a true success, eventually providing gamers on the go with titles that featured virtually all their favorite NES heroes. Super Mario Land, as a launch title that helped make that huge success possible, deserves some of the credit.

But let's get real. Super Mario Bros. came out in 1985. By 1989, when Super Mario Land arrived, Super Mario Bros. 2 had been on the shelves for a long time and Super Mario Bros. 3 was available in Japan and being prepped for overseas release. I remember reading positive commentary on this game when it was released and, even back then, thinking that was only possible because it was a portable game filling a void. Even at the time of its release, it looked dated and old -- but it allowed gamers to control Mario on the go and that was a good thing!

So I leave you with the same sort of warning I'd offer to any gamer looking to play the original titles from a venerated series such as Dragon Warrior, Final Fantasy or some other franchise: times change and games improve, thanks to enhanced technology that finally allows developers to realize the worlds that fill their imagination. Those old classics are classics for a reason, but often they were quickly improved upon as newer offerings arrived. Super Mario Land wasn't the first Super Mario game, nor was it ever the best; but it was the first to release for a handheld platform and that makes it part of history. The game itself might be barely average by the standards of the series, but it remains important to this day.

If you enjoyed this Super Mario Land review, you're encouraged to discuss it with the author and with other members of the site's community. If you don't already have an HonestGamers account, you can sign up for one in a snap. Thank you for reading!

© 1998-2021 HonestGamers
None of the material contained within this site may be reproduced in any conceivable fashion without permission from the author(s) of said material. This site is not sponsored or endorsed by Nintendo, Sega, Sony, Microsoft, or any other such party. Super Mario Land is a registered trademark of its copyright holder. This site makes no claim to Super Mario Land, its characters, screenshots, artwork, music, or any intellectual property contained within. Opinions expressed on this site do not necessarily represent the opinion of site staff or sponsors. Staff and freelance reviews are typically written based on time spent with a retail review copy or review key for the game that is provided by its publisher.