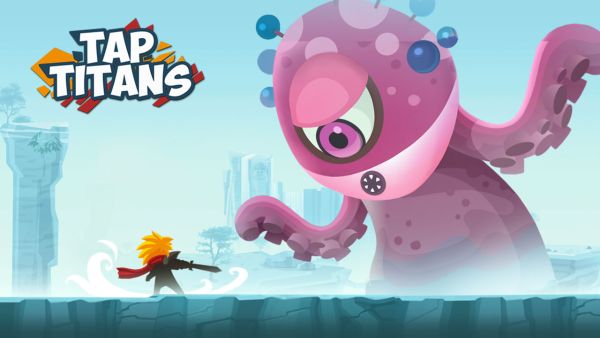 Do you remember Half-Minute Hero? That game's developer stripped the RPG genre down to its most basic elements and tropes. Despite featuring minimalist design, the title offered an engaging experience, mostly thanks to fast-paced and varied mission objectives that had to be completed on the way to each area boss. Over the ensuing years, I've seen a plethora of freeware and indie projects take a similar crack at the "scaled down RPG" concept, but generally with disappointing results. Those failures don't prevent me from looking for a more successful endeavor, though, and eventually my perpetual search led me to one promising new possibility: Tap Titans.

Eons passed between the moment I found Tap Titans and the decision to finally download it. What can I say except that I'm a busy man? Then it took longer still before I finally booted it up during a work break. Immediately, I commenced tapping my screen as if I were desperately trying to get its attention. A cartoon demon partly responsible for the world's collapse appeared, and I wasn't about to let him land any blows. I slapped my finger furiously against my electronic device, damage numbers rapidly ascending in testament to my awesomeness. Eventually, the creature perished. I awaited my due fanfare, but it never arrived. Instead, another monster materialized on my Galaxy. Once again, I poked his sprite to death.

I didn't notice the minute hand's progress on the break room wall clock, as I played on my phone. I was nearly late returning to work because I was so obsessed with stabbing my screen. I recognized the early signs of addiction, even then, and yet I had received no real satisfaction from that first session with Tap Titans. Something glorious was missing. The game was content to merely rush me from one opponent to the next without ever providing much reinforcement. Yes, it paid me in gold coins each time I slayed a foe, and occasionally a chest full of cash would drop. I could use that sudden income to hire additional party members, level up my swordsman, or learn and/or upgrade skills. Ultimately, though, I was performing the same action ad nauseam, for only a simple reward. I prodded the screen. My foes died, but another appeared. Eventually, a boss arrived and I had to tap harder or rely on special techniques to vanquish it within the time limit--which only takes effect while fighting a boss. After that, the cycle begins anew...

To say that Tap Titans is bland or repetitive would be to gloss over its numerous other shortcomings. Sure, the game's mechanics are stable, but that's not saying much when you consider the dearth of interactive stimuli. Worse, though, is the lack of any real penalty when you fail to tap the screen. I played the game once while in the bathroom (don't scoff; I'm sure you've all done the same) and set my phone down afterward to wash my hands. Without touching the screen during that time it took to lather, rinse, and dry my hands, I somehow managed to defeat two adversaries. This is a common occurrence because foes seldom dish out reprisals. My super-boosted, automated party members automatically slayed them. Except for the time you spend fighting bosses and beefing up your party, you don't even need to play the game in order to advance.

The one and only time I ever lost a buddy came while I was locking horns with a boss. Apparently, those creatures can fight back, under the right circumstances. But there isn't much difference between one boss encounter and another. You might need to slam your screen more swiftly, or make use of passive abilities and more powerful attacks within your possession, but in the end you're still interacting in only the most basic way, without any real deviation from the game's core mechanic. I understand that Tap Titans is supposed to be a minimalist affair, but would it hurt so much to add a couple of rudimentary features to lessen the monotony?

The game's presentation could have offered some premium material to help assuage the boredom, but even there the game's minimalist design and tedium become apparent. You defeat an enemy, and the only thing that changes is the sprite occupying the screen. You're otherwise stuck with the same nicely rendered but otherwise unremarkable background, until finally you march onto the next theme. There, you see another static environment that lingers for dozens more scuffles. It would be neat if the game made subtle alterations to the environs as you progress toward the area boss, and perhaps even displayed different locales every few battles besides. I say this because staring at the same few unchanging sets of castles, dense forests, rolling hills, and icebergs only serves to remind you how vapid Tap Titans truly is. That's especially true as it begins reusing tired old backdrops.

Tap Titans is addictive at first, to be sure, but its simple magic wears off quickly. Just about any other RPG-lite title provides more interaction, and even those that offer only a tad extra in comparison are a wiser investment of your time than this game that exists for the sole purpose of giving you an excuse to mindlessly tap the screen. Tap Titans isn't merely a boring product. It's mind-numbing.

If you enjoyed this Tap Titans review, you're encouraged to discuss it with the author and with other members of the site's community. If you don't already have an HonestGamers account, you can sign up for one in a snap. Thank you for reading!

© 1998-2021 HonestGamers
None of the material contained within this site may be reproduced in any conceivable fashion without permission from the author(s) of said material. This site is not sponsored or endorsed by Nintendo, Sega, Sony, Microsoft, or any other such party. Tap Titans is a registered trademark of its copyright holder. This site makes no claim to Tap Titans, its characters, screenshots, artwork, music, or any intellectual property contained within. Opinions expressed on this site do not necessarily represent the opinion of site staff or sponsors. Staff and freelance reviews are typically written based on time spent with a retail review copy or review key for the game that is provided by its publisher.