What's your first thought when you learn that a game was developed by a single person? If you're anything like me, it's not "Wow, and I bet it'll look, play, and sound every bit as good as anything put together by an entire team."

Axiom Verge, a Metroidvania title from lone developer Tom Happ, is amazing for all sorts of reasons, but the fact that one guy built it surely trumps the rest of them. Nothing appears to have been sacrificed along the way, either. Although the game's visuals feel like they might easily have been included in original PlayStation fare, and aesthetically would blend in nicely with SNES classics, they feature an art style that renders them timeless. And the soundtrack and effects might not top the best that Castlevania and Mega Man have to offer, but you're still in for an aural treat. 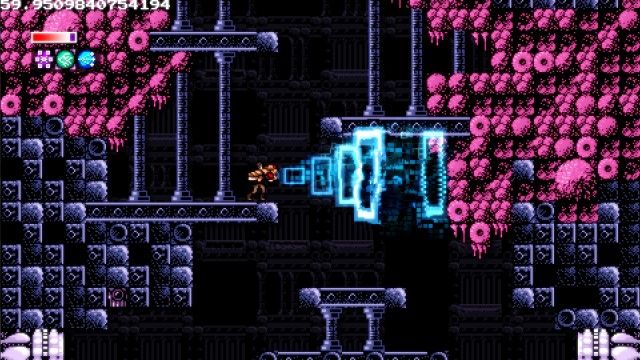 The most important element in any experience of this sort is the area you're allowed to explore, though, and Axiom Verge showcases painstaking design that you'd generally expect from veteran developers with years of experience working within the genre. You could have told me three or four people worked together just to make sure that the labyrinthine environment is crammed full of secrets while remaining a joy to navigate and I would have believed you.

But enough about that. Axiom Verge is good at what it does. Will most people even care?

The game begins with a lab experiment that concludes the only way lab experiments possibly can in a video game: explosively. A high-tech building crumbles around a young man named Trace, who realizes in those tragic seconds that his end has come. Then he awakens in a mysterious alien environment, as if birthed from an over-sized egg. Voices communicate with him, let him know what steps he should take next to guarantee his prolonged survival. Essentially, he must run and jump and shoot his way through one of the most hostile environments I've yet encountered in the genre.

At the start of this review, I called Axiom Verge a "Metroidvania," but that term was a somewhat inaccurate placeholder. Trace wanders through a bunch of corridors while the game produces a map you can check frequently, yes, but he won't gain experience points by slaying foes the way heroes did in Symphony of the Night and its successors. Instead, he picks up the occasional power-up: a health expansion, an orb that increases his attack power and any one of a number of other weapons and accessories. It's clear that Happ's primary source of inspiration was Super Metroid, not anything with whips and swords that followed. 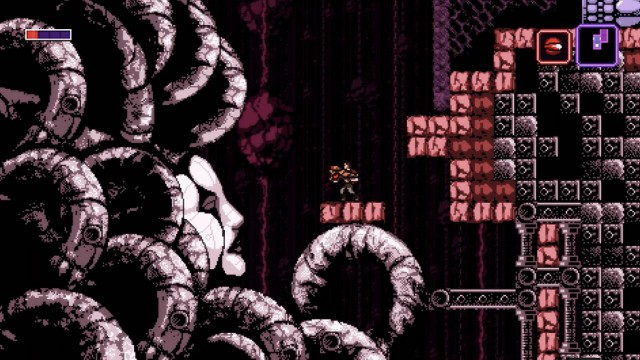 If you've played a lot of the more recent Castlevania titles, you know that any time you invest is rewarded with gradual character enhancements, until finally you're an unstoppable force. Axiom Verge, in contrast, seldom allowed me to feel overpowered. Until the game's midway point or thereabouts, even a trip back to the opening screens felt risky, and I abused the heck out of the save chambers secreted around the game map. There are enough of them that you'll seldom feel angry when Trace collapses to the ground and his life energy floats in the air above him, soul-like. He's dead at that point, but you probably mapped out more of the area and maybe even picked up some sweet upgrades. You failed but probably learned something in the process.

Boss battles are particularly grueling. The over-sized foes rely on simple but astonishingly effective patterns, and it's easy to tell when you're actually dealing damage and when your attacks are useless. However, most of the monsters are damage sponges. A few hits won't do much good, even after you power up your equipment. You'll have to strike with everything you've got, dodging counter-attacks along the way, finding safe ground. There are no energy tanks to hold in reserve, either, so you have to be very careful indeed if you mean to survive.

By the time I reached the end of the game, with 90% of the map explored and just over 70% of the guns and other gear gathered, I had spent most of 18 hours in the effort and Trace had died an embarrassing 77 times. I've never claimed to be some sort of action game savant, but that statistic is depressing even for an initial run. It's possible to rush through in with fewer than 4 hours, though, once you know your way around the world. Some players have even done it in half that number, and there's also a trophy awarded if you manage to clear the campaign without dying. An auto-save feature forces you to play fair, too, so good luck with that. 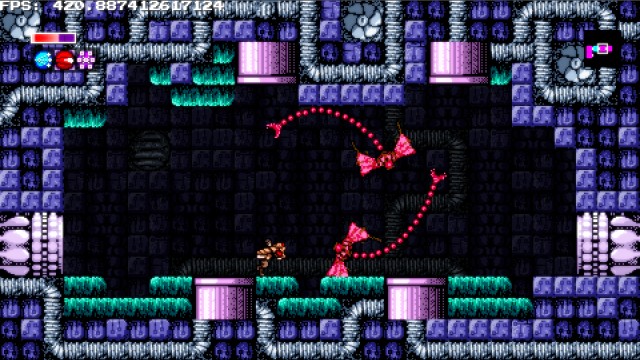 Certainly, the game isn't without its minor issues. I saved my progress in one chamber, for instance, and the screen kept reverting to a higher level without showing the hero as the process concluded. Then he would fall through the map to several rooms below his starting position (according to the indicator) and I couldn't see or control him until I returned to the title screen. Obviously, that was a flaw, but it also resolved itself once I saved at a few other locations, and it only happened the one time.

Then there's stuff that is purely a matter of taste, which I doubt would have come out much different even with a team of 20 people contributing. Sometimes, the game's difficulty feels excessive, with even common guards able to dish out a punishing amount of damage. It's also a little too easy to bang your head up against a wall for my tastes. Early in my mission, I was exploring an area and took a jump from a high ledge. I wasn't able to return to those earlier rooms and the upgrades that I'd missed for quite some time, and there are other points along the way where it's also possible to push forward prematurely. A wide variety of weapons can be unearthed, which is cool, but only a handful of them are useful enough that you'll probably want to rely on them for long. Like I said, those particular issues all come down to personal taste and in the end, they didn't bother me much.

Whatever its few minor flaws, Axiom Verge is one of the finest games of its type that I've played in recent years, going back to at least since Castlevania: Order of Ecclesia on DS (which came out way back in 2008). If you've been looking for something new that can effectively scratch that familiar itch, I can't imagine you doing any better elsewhere. I'm glad to see that there is a developer who still carries a torch for those classic experiences, and who has the skill to share his passion with the rest of us. I can't wait to see where he goes from here.

© 1998-2021 HonestGamers
None of the material contained within this site may be reproduced in any conceivable fashion without permission from the author(s) of said material. This site is not sponsored or endorsed by Nintendo, Sega, Sony, Microsoft, or any other such party. Axiom Verge is a registered trademark of its copyright holder. This site makes no claim to Axiom Verge, its characters, screenshots, artwork, music, or any intellectual property contained within. Opinions expressed on this site do not necessarily represent the opinion of site staff or sponsors. Staff and freelance reviews are typically written based on time spent with a retail review copy or review key for the game that is provided by its publisher.