Undertale is a unique indie game from a fellow named Toby Fox. Predominantly, it is an RPG, with a combat system that mixes turn-based battles with twitch reflexes. To advance through the world, you'll also have to solve a lot of puzzles. Though the environment you must explore is relatively small, it's packed with clever references to classic titles and a sense of humor all its own. There's also considerable replay value, as a lot of players will want to go through it a second and maybe even a third time just to experience everything.

If you're even remotely interested in playing Undertale, my recommendation is that you go for it. The game is an indie title, so you can download it for a perfectly reasonable $10 even when it's not on sale, and your likely experience easily justifies that investment. Whether you fall in love with everything or just find it all reasonably engaging (either one a probable response), there's little chance you'll reach the closing credits and feel sorry about taking the plunge. What you might regret, however, is reading up on it too much before your purchase. 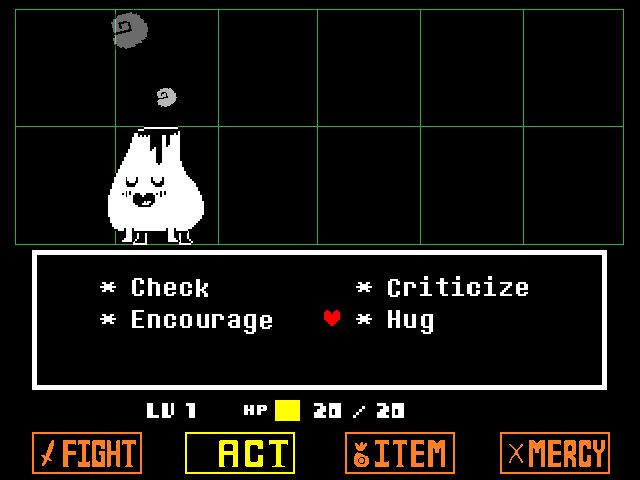 Don't you just hate reviews that say "I'm not going to tell you anything, because you should just go buy the game"? You're reading the review in the first place because you're interested, but you'd like a bit more info. So I'll go ahead and provide more of that here, and I'll do my best to avoid spoiling anything I shouldn't in the process, which means I still have to avoid even vague mentions of a few of the very things that make the game remarkable.

In Undertale, you play a human child who has suddenly appeared in the world of the monsters. This is a subterranean kingdom, shut off from the human realm by a powerful barrier that was put in place by 7 human wizards, ages ago. Ever since then, monsters have been prevented from returning to the surface, and they resent that a fair bit. As a guest in their world, your life is in peril (though not necessarily to the extent you might suppose, since they don't mind you eating at their restaurants or purchasing goods from their vendors). There are numerous perils along the way, but the main hazards are an armored warrior named Undyne and the king himself. They would like to capture your soul, because then they can fuse it with the souls they have extracted from other fallen humans and thus produce enough power to finally pierce that pesky barrier.

Generally dark themes are lightened considerably by comic relief, which pops up almost immediately in some surprising ways. One early example is a skeleton duo. They are brothers, and their stated job is to watch for humans, capture them and take them to the king. However, one of them is thoroughly unmotivated and his fellow is endearingly inept. They make for an intriguing pair, to say the least. I especially liked the puns that one of them insists on sharing, complete with close-ups and rimshots. 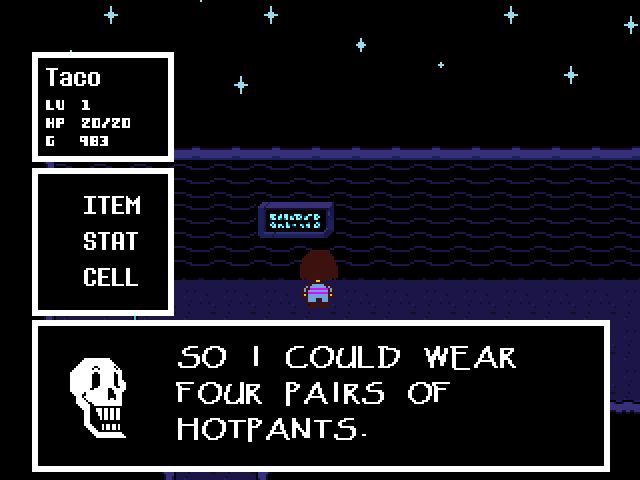 The game's world is simply presented, often with minimal artwork that only just barely establishes a proper sense of setting. Some areas are rather detailed, but a lot of them feel barren, comprised of sterile laboratory hallways or rocky ledges and such. It's all cohesive enough, though, in a style reminiscent of artsy 16-bit RPGs. The visuals ultimately suit the experience quite well. I don't think anything would be ruined by further refinement, but what's here does the job and is joined by a surprisingly enjoyable soundtrack that hearkens back to the same era.

As you explore that treacherous world, you'll frequently need to solve puzzles, which are cleverly tied into the story so that you hardly notice them even when they're being pointed out to you. That's a nice switch from some games that try to pretend a seemingly endless supply of puzzle rooms are anything more than a stalling tactic. The ones you encounter here are generally quite simple, rarely forcing you to do more than step on tiles or push objects in order to advance. Late in the game, I had a bit of trouble with one that had me leap along a series of floating platforms with arrows that would point in various directions and rotate as my movement took me over a series of switches, but that chamber was an exception to the rule.

Combat, as I noted previously, mixes a turn-based approach with action elements. Enemy encounters happen randomly, but they occur infrequently and don't get in the way of any of the puzzles. Their relative scarcity prevents them from ever feeling repetitive, even though the number of unique enemy breeds you'll face is quite low. It also doesn't hurt that you have a number of options when it comes to how you deal with each foe, preventing Undertale from being one of those games where you just mash a single button to dispatch most of your foes. Of course you can attack, but more passive responses are also available. 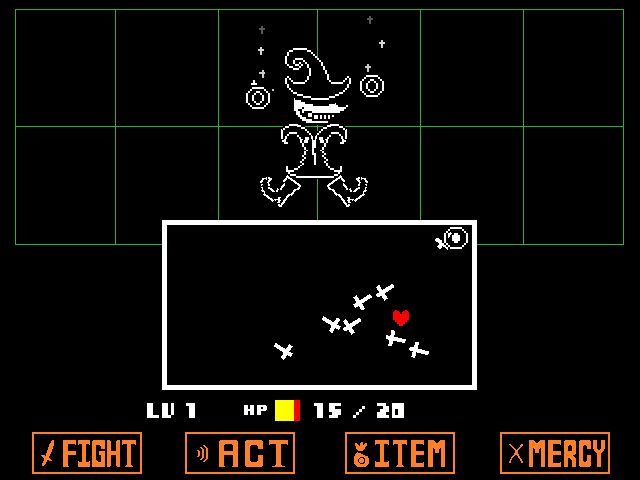 When an enemy strikes, the action part of the battle comes into play. You must move a heart around a provided space, dodging various shapes that fly around the area in patterns unique to each type of foe. For example, when you are facing canine breeds, you might find it effective to bounce around at a distance, then soar over its head like a rubber ball as the canine icon jumps your way. In another case, an orb might emit harmful waves, and you'll need to dodge between them as if you are playing a bullet hell shooter. Some of the patterns can get fairly intense, so you'll want to bring along what little protective gear you can find, and powerful weapons to end things more quickly if you decide to fight fire with fire.

There are some irritating elements sprinkled throughout the campaign, including one character who constantly interrupts your adventuring with status updates that aren't really needed. That quickly gets annoying, but it only really impacts one area. Combat sometimes also can feel excessively difficult until you get the hang of it, especially if you didn't bring along sufficient restorative items, but save points are at least common and will refill your energy. You don't have to worry about losing too much progress to a bit of bad luck.

As I noted near the start of this review, it's best if you can experience Undertale without knowing too terribly much about it. I've done my best to cover the basics, but I realize I probably haven't made the game sound half as terrific as it actually is. In a weird way, though, I'm actually doing you a favor. Now, go buy the game, play through it and thank me with whatever currency seems most appropriate once you're done. I'm fond of chocolates. And cash.
5/5

If you enjoyed this Undertale review, you're encouraged to discuss it with the author and with other members of the site's community. If you don't already have an HonestGamers account, you can sign up for one in a snap. Thank you for reading!

© 1998-2021 HonestGamers
None of the material contained within this site may be reproduced in any conceivable fashion without permission from the author(s) of said material. This site is not sponsored or endorsed by Nintendo, Sega, Sony, Microsoft, or any other such party. Undertale is a registered trademark of its copyright holder. This site makes no claim to Undertale, its characters, screenshots, artwork, music, or any intellectual property contained within. Opinions expressed on this site do not necessarily represent the opinion of site staff or sponsors. Staff and freelance reviews are typically written based on time spent with a retail review copy or review key for the game that is provided by its publisher.