The other day, I went to the local game shop. The owner asked me what I'd been playing lately, so I started telling him how much I've been enjoying Guitar Hero Live. He wasn't having any of that, though. He recounted how he had the title up and running for demonstration in the store, and some customers tried it. One of the younger ones apparently felt so awful about the experience that he was on the verge of tears.

Guitar Hero Live isn't the sort of video game franchise that you might imagine would make a person cry, or even come close to that brink, regardless of age. But I guess I can sort of see it. Unlike previous installments, this newest game in the series--released after a lengthy hiatus that I never asked for and didn't particularly appreciate when it was announced--takes an unusual approach. Instead of featuring polygonal models dancing around the stage, the background now runs mock concert footage that changes according to your performance. If you're doing good, the crowds are enthusiastic and girls are moshing near the stage and riding on shoulders and guys are screaming and fist pumping and holding up signs of encouragement. 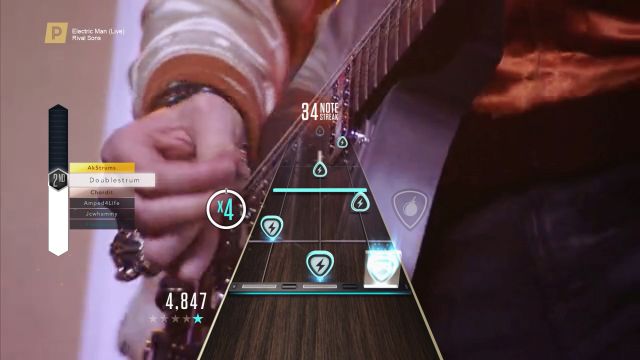 If you're rubbish at the game, things go a little differently. Those adoring crowds won't hesitate to let you know that they're not getting their money's worth. The camera will turn to your band mates, and their body language and expressions make it obvious they'd like to know what the heck you think you're doing. For some people, especially children who the ESRB figures shouldn't even be playing the title in the first place (Guitar Hero Live is rated T by the ESRB, thanks to lyrics that for the most part are censored if they get too Green Day-esque), the disapproval might be too much to take.

I got my own taste of that lack of adulation within a couple of minutes of popping in the disc, because the Tutorial you have to play as the opener throws everything at you in rapid succession. I've spent dozens of hours with the previous games in the franchise, but that was while using the old guitar configuration that has six buttons placed in a row along the neck. The new game ships with a differently configured guitar that puts two columns of three buttons right at the top, near the pegs you'd typically use to tune an actual instrument. This is not a minor change.

When I first tackled the tutorial, I initially did rather well at first, but overall you might say it was 30 seconds to fail. The new placement of the buttons allows for some less familiar challenges that bring the experience a bit closer to the one you'll have if you pick up an actual guitar and give "Hotel California" your best effort. As notes rush down the center of the screen in the familiar Guitar Hero style, you still have to hold the appropriate keys on your plastic instrument while "strumming" the plastic bar near the wide base. White notes require you to hit the lower column of buttons, dark notes require you to press those in the upper column, and others will make you hit one from each column at the same time, almost as if you are trying to play a dead-simple chord. 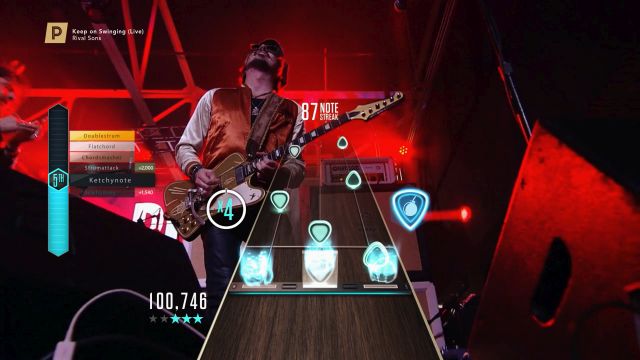 On the lower difficulty settings--including the default one--you don't have to worry about any notes but the white ones, except in that humbling but blessedly brief tutorial. Play is roughly equivalent to the old Guitar Hero experience, and feels mostly natural even though the buttons are grouped closely enough that I sometimes hit the wrong one. I spent most of my time with the game playing on this setting, and I was able to achieve 100% completion on a lot of selections on my first attempt, particularly if I was focusing. Doing so didn't feel overly simple, and there were some songs that definitely tested me, but it all felt quite fair. When I bumped things up from "Casual" to the next of three harsher settings, however, I got schooled. My fingers just aren't good at bending the right way to hit the buttons in a timely manner, which is why I finally gave up on learning to play the actual guitar. This new game accessory leads to finger strain more quickly than the older ones did, and I say that knowing full well that it may just be a personal quirk. It in no way prevented me from being able to enjoy myself and clear songs. If I had needed to, I could have also played on an easier setting still, so I feel comfortable saying that there's an appropriate setting here for just about everyone, from nooblet to expert.

At a glance, you'd be excused for thinking that the game is done with its new tricks once it introduces the crowds and revamped guitar. The song selection seems quite predictable, after all, and features recent hits from Rihanna, OneRepublic, Imagine Dragons, The Black Keys, Pearl Jam, Fall Out Boy and other FM radio mainstays. Tracks are combined into sets as you first encounter them, however, so that you'll have to play three or four in a row. That's an interesting twist I wasn't expecting. It makes you feel more like you're putting on a performance in a stadium, which is cool, but it also means you need to commit to about 20 minutes on average if you want to advance. Fortunately, you'll unlock songs and from there can access them and practice them individually in Quick Play, if it suits you.

But Guitar Hero Live threw still one more unexpected wrench at me, and I wound up loving it for that. The wrench is the "TV" mode. Once I cleared the campaign in around 4 or 5 hours, I spent more than 10 more goofing off with the game's online component, after assuming when I first saw it on the menu that I would test it out for a bit and then be done. 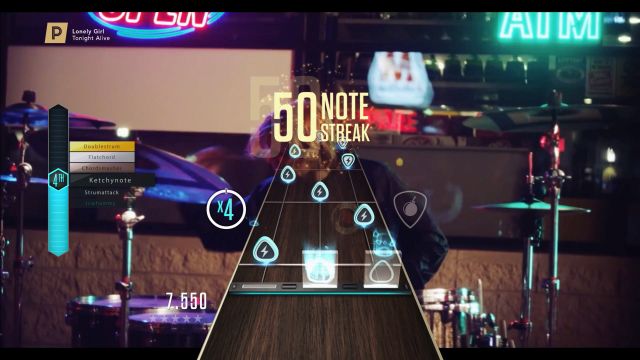 TV mode works like the label suggests it would. You can choose from one of two "channels," one oriented toward pop and one toward harder rock and metal, and they stream music 24/7. There are no commercials, except quick ads for other songs that you can play between every three or so tracks. So you can log in any time of day and find something running, and you can compete against established scores or--sometimes--even against other players. Doing so earns you coins that you can use to purchase "plays," or upgrades for your guitar, or decks and so forth.

There's a huge library of music already available, which I estimate currently triples the total selection of music at your disposal. More seems to drop on a weekly basis, including special stuff like--at present--a selection of Weezer songs performed live. You can either tackle the streaming music in the order it is presented, or you can use plays to individually practice a song you especially like. I looked through the list and was delighted to find "Pretty Fly (For a White Guy)" and "Marcy Playground," two tunes that meant a lot to me in my late teens. I don't believe I ever saw their videos back in the day, so I was more delighted still when those played in the background instead of the crowds from the "Live" mode. The video quality varies wildly from song to song, of course. Some old footage was created before HD was even a thing. But each video is a real treat and there's remarkable variety, ranging from Queen and David Bowie, to Carrie Underwood and Eric Church, to Alice in Chains and Lamb of God and all sorts of artists I've never heard of that fit somewhere in between or off to the side. 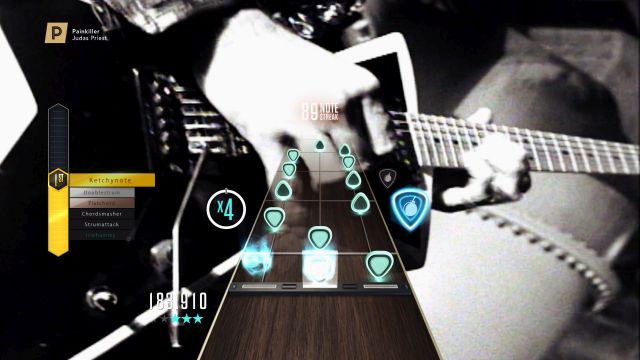 TV mode made me feel almost like I was a teen again, sitting around at my grandma's armchair and watching MTV videos when she wasn't paying attention, then changing it to Nickelodeon if I heard her approaching (a trick I learned from my cousin). I haven't appreciated mainstream and niche music this much in ages, and if Guitar Hero Live manages something similar for you, well, you're in for a treat.

I had some minor issues with Guitar Hero Live along the way, but they're mostly nitpicks that aren't worth the word count it would take to sufficiently outline them. When I was talking to that shop owner about the game, I started with the assertion that it's the best Guitar Hero title to date. I still believe that, after doubling the time I've spent with it thus far. If the franchise had to take a break for five years in order to come back this strong, I say the wait was worth it... even if it does make the occasional player contemplate tears.
5/5

If you enjoyed this Guitar Hero Live review, you're encouraged to discuss it with the author and with other members of the site's community. If you don't already have an HonestGamers account, you can sign up for one in a snap. Thank you for reading!

© 1998-2021 HonestGamers
None of the material contained within this site may be reproduced in any conceivable fashion without permission from the author(s) of said material. This site is not sponsored or endorsed by Nintendo, Sega, Sony, Microsoft, or any other such party. Guitar Hero Live is a registered trademark of its copyright holder. This site makes no claim to Guitar Hero Live, its characters, screenshots, artwork, music, or any intellectual property contained within. Opinions expressed on this site do not necessarily represent the opinion of site staff or sponsors. Staff and freelance reviews are typically written based on time spent with a retail review copy or review key for the game that is provided by its publisher.