After playing through the first level or two of the TurboGraphx-16's Blazing Lazers (or Gunhed, depending where you live), I couldn't see what the fuss was all about. Yeah, since it was made by Compile (along with Hudson Soft), it was automatically a solid game, but it wasn't providing nearly the sort of experience I'd expect from a title that some consider to be one of the best shooters of its era. It felt too easy.

I would fly around, shooting enemies and using whatever power-up schemes suited my style the best, often waffling between the wave beam and laser attacks for the primary weapon and relying on the "F" secondary one that, in conjunction with the wave, would emit multiple beams that covered the majority of the screen. As in most Compile games, part of the challenge lay in simply keeping the exact build I wanted once I had it, since power-ups dropped like snowflakes in the heart of winter. I'd have to be careful in order to avoid picking up the uninspiring regular bullets or semi-distracting homing missiles by accident. 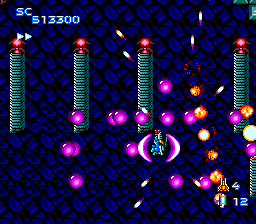 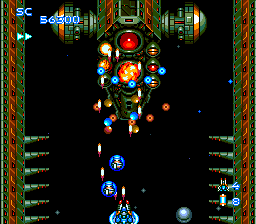 The less intense enemy waves are, though, the easier it is to dodge unwanted goodies. I found that I wasn't having any trouble whatsoever, at least in the early going. I'd cruise through stages, building my ship up so that I could cover the screen with an all-out assault. Mid-bosses and standard bosses alike fell to my might, all without ever putting up more than token resistance. I spent my time collecting a lot of high-powered bombs, but I never found a reason to use them since I never found myself in any real trouble. I was a god and this was my playground -- a zone where I could obliterate all who dared to stand in my path.

Blazing Lazers lulls you into a false sense of security. A misspelled name and a couple of easy levels easily mislead a person into believing this was an early, amateurish effort by Compile, one that perhaps gave the development team practice so that it could refine its vertical shooter chops for future use in Aleste titles. Then the difficulty ramps up, that wide-ranging "F" power-up gets replaced by the shield just so you have some margin for error, you're expending bombs aplenty because there are too many foes on the screen for any amount of regular ammo to handle and you're in the middle of the closest thing to true bullet hell that the TG-16 could facilitate.

A very noticeable difficulty spike occurs around the fifth level. The first two stages were easy and dull, while the third and fourth were a bit tougher and more interesting. Then the fifth one places you in a desert, with hordes of ships in the air and various structures like pyramids and Gradius-type Moais on the ground. More enemies fill the screen than ever before, and now they're more durable. Their strength allows them to fill the air with bullets before they finally perish. You'll go from feeling a mixture of amusement and contempt at the enemies' attempts to halt your progress, to fervently hoping there's only one more wave of pure destruction between you and the level boss.

Each of the game's final five levels has a certain "something" waiting to give you fits. Indestructible bubbles expand and contract, forcing you to maneuver around their radii while you try to contain the massive amount of foes that has been your reality for a few stages. Tiles fly from the floor of a base to assail you as you try to deal with an amazing number of turrets that WILL cover the screen with bullets if you allow them to remain alive for more than a second or so after they scroll into view. And then there is the final level, which is just cruel. Not only is it a boss rush that includes the extremely hard-to-kill tank from the seventh stage, but between each of those fights, you'll have to deal with enemy waves that, towards the end, are as frantic as anything else I've described in this review. 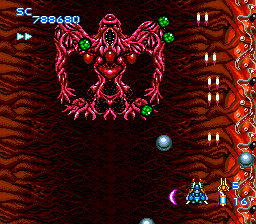 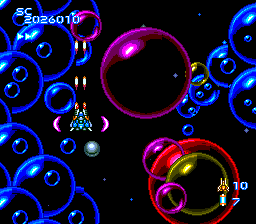 When you die, you resume play wherever it was that you perished, with your new ship boasting nothing more than the bare minimum of weaponry. In the latter stages, good luck trying to collect anything at all before dying again, again and, of course, again. At least a few factors are working in your favor. That shield power-up is amazingly useful, for instance. Collect one of those and you can absorb a lot of damage before it fades. Even when it's gone and you're waiting for another "S" to drop from the heavens, as long as your gun is powered up, you can survive a few attacks at the cost of some of that firepower. While Blazing Lazers does get extremely (and possibly unfairly, depending on one's skill level) difficult, there's at least an effort made to balance things a bit, I must admit. I might have been cursing loudly and frequently, but, still, I have to admit that much.

If the game's difficulty were a bit more even, I might have wound up placing Blazing Lazers among the very best shooters I've played. However, it starts out a bit too easy and winds up a bit on the brutal side for my tastes. Still, those middle levels do rank among the most well-designed stages I've yet experienced. The package offers the rare sort of shooter experience where a person can feel their adrenaline levels rise in concert with their heart rate as they progress, and in the end that makes it a more than worthy addition to any shooter fan's library.
4/5

If you enjoyed this Blazing Lazers review, you're encouraged to discuss it with the author and with other members of the site's community. If you don't already have an HonestGamers account, you can sign up for one in a snap. Thank you for reading!

© 1998-2021 HonestGamers
None of the material contained within this site may be reproduced in any conceivable fashion without permission from the author(s) of said material. This site is not sponsored or endorsed by Nintendo, Sega, Sony, Microsoft, or any other such party. Blazing Lazers is a registered trademark of its copyright holder. This site makes no claim to Blazing Lazers, its characters, screenshots, artwork, music, or any intellectual property contained within. Opinions expressed on this site do not necessarily represent the opinion of site staff or sponsors. Staff and freelance reviews are typically written based on time spent with a retail review copy or review key for the game that is provided by its publisher.