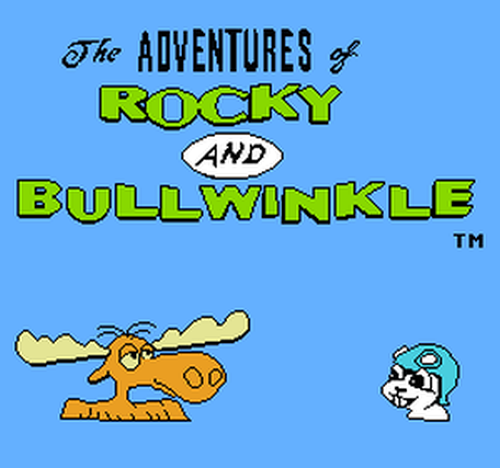 You might be wondering why a man in his mid-thirties would bother playing an old NES game based on an ancient cartoon. It's simple, really: there was once a time when video games based on animated shows didn't make me want to hurl myself from a cliff. I call this era "the early '90s." I thought I had played all of the animation-inspired material this period had to offer, but a quick check of the NES library online revealed that I had missed a few games, including The Adventures of Rocky and Bullwinkle and Friends. Once I made this discovery, I didn't hesitate to act. I secured the title as quickly as I could and took it for a test run, hoping I could recapture the magic of being eleven and playing software based on a license I enjoy.

As you can imagine, calamity struck...

Right out of the gate, I regretted my decision to check out Rocky and Bullwinkle. While it's commendable that the developers utilized an art style that hearkened back to the program, it also proves damning. The video game looks like an authentic Rocky and Bullwinkle product thanks to its minimalist visuals, which mirror the show terrifically. Unfortunately, because the graphics are as sparing as the effects were on the original show, you end up with a lot of vapid environments and poorly generated images. The title screen, for instance, appears to have been drafted by a five-year-old. There's also a castle-themed segment in the first stage that exudes "lackadaisical." It's presented as a seemingly endless sea of gray, with only a handful of minor details to liven up the depressing palette. Of all there is to see in Rocky and Bullwinkle, though, nothing compares to the pale white Rocky, who appears to have died days before setting out on his quest.

Honestly, I wouldn't fault anyone for powering down their NES at this point, especially once they take the soundtrack into account. Every stage features a "lovely" five-to-seven note, high-pitched melody, sometimes accompanied by a second layer that sounds as if it's arguing with the first set of notes. The end result is a nerve-racking score that will make you reach for the volume control. 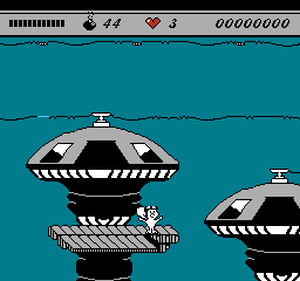 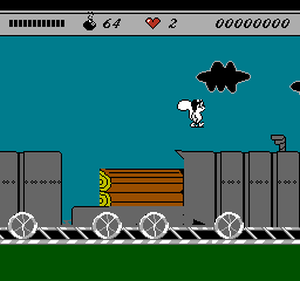 Even if you tune out the music and ignore the blah graphics, though, you'll soon realize that the game plays about as well as it looks and sounds. Slippery control response awaits you, hungry for the four-letter words you'll utter as you slide into Boris or Natasha, slip off of the campaign's myriad narrow ledges, or careen past helpful power-ups and keys. It also doesn't help that you have to walk just about to the right edge of the screen before the viewing perspective will scroll. Thus, you'll end up plowing into dozens of basic adversaries that would be easily dodged in superior platformer titles. The absolute pits, though, is when you encounter enemies like the snakes found in level two, which spawn right on top of you without giving you the slightest warning.

Let's exacerbate the issues, shall we? The game also loves to pit you against goons with tall sprites who are nearly impossible to leap over, and who sometimes fire projectiles that are just as difficult to dodge. The obvious answer would be to mount an offensive, either by lobbing bombs or using Bullwinkle's special antler ram attack. In the case of the former, you'd better time your toss just right, though. Your opponent otherwise might stroll unfazed past the explosive as it slowly detonates. Sadly, a single bomb, or even two or three, never does the trick. In order to off a baddie with incendiaries, you have to continuously throw several of them and wait, hoping that each burst singes your target.

Using your antlers instead of explosives might sound like the clear way to go, but the truth is it's almost a worse option. Not only do you have to collide with the opposing sprite numerous times, but you constantly lose hit points when executing this ability (and the same goes for Rocky's gliding technique). The main reason to defeat an opponent in games like this is so that you can mitigate damage, so it makes no sense to rely on an attack that inflicts it. 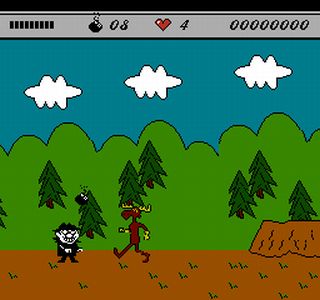 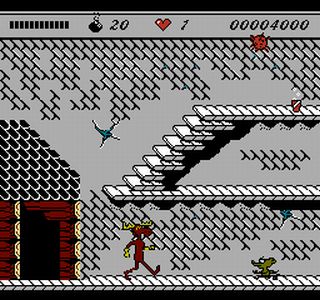 Since scotching nemeses is out of the question, dodging swift monsters and seemingly insurmountable obstacles is pretty much all there is to Rocky and Bullwinkle. It seems like the least you could hope for is some decent stage design, but even that modest wish goes unfulfilled. Each level is a straightforward trudge, requiring you to stop only once in a while to nab a key. There are no complex designs or clever schemes. All you receive are the most basic of platformer layouts, with one or two segments that stand out mostly because the aforementioned slippery control response renders them ridiculously tough.

At times, I have to wonder if this game was released in an incomplete form, like a beta with a price tag. I say this because there are loads of questionable design choices that smack of rushed product. For instance, Rocky is immobile while standing on a staircase. No, I don't mean he can't climb stairs because he's too small to do so. I mean that he can't descend them either, as if he doesn't understand how inclined planes work. It's also rather suspicious--not to mention nifty--that health restoration items reappear after you walk but a few feet away and return to their location. If there was one thing I encountered that I positively detested, though, it was a stairway leading down in stage three. If you don't walk perfectly onto the top step and descend Castlevania-style, then you will die via pitfall. It doesn't matter if you carefully drop from one stair to the next; the game will always rule it as a plummeting death unless you're moseying down them properly.

Towards the end of the campaign, respawn points are few and far between. Some stages even make you take on the whole shebang from the top when you perish. To make matters worse, you don't have any continues or passwords to fall back on, either. Rocky and Bullwinkle demands that you soldier through its rotten collection of banal stages in one sitting, without a single game over.

I should have expected The Adventures of Rocky and Bullwinkle and Friends to be an awful title. However, I was once again blinded by nostalgia and its accompanying optimism. The hearth-warming memory of seeing some of my old favorite characters rendered in 8-bit pixels quieted rational thought. "There's no way a Rocky and Bullwinkle game on NES would be any good," is what I should have told myself. Perhaps I should remain focused on the present and only play games that aren't more than a decade old. Say, isn't there a Rocky and Bullwinkle game on Xbox 360, too? I think I can feel my reminiscing and masochistic heart fluttering yet again...
0.5/5

If you enjoyed this The Adventures of Rocky and Bullwinkle and Friends review, you're encouraged to discuss it with the author and with other members of the site's community. If you don't already have an HonestGamers account, you can sign up for one in a snap. Thank you for reading!

© 1998-2021 HonestGamers
None of the material contained within this site may be reproduced in any conceivable fashion without permission from the author(s) of said material. This site is not sponsored or endorsed by Nintendo, Sega, Sony, Microsoft, or any other such party. The Adventures of Rocky and Bullwinkle and Friends is a registered trademark of its copyright holder. This site makes no claim to The Adventures of Rocky and Bullwinkle and Friends, its characters, screenshots, artwork, music, or any intellectual property contained within. Opinions expressed on this site do not necessarily represent the opinion of site staff or sponsors. Staff and freelance reviews are typically written based on time spent with a retail review copy or review key for the game that is provided by its publisher.