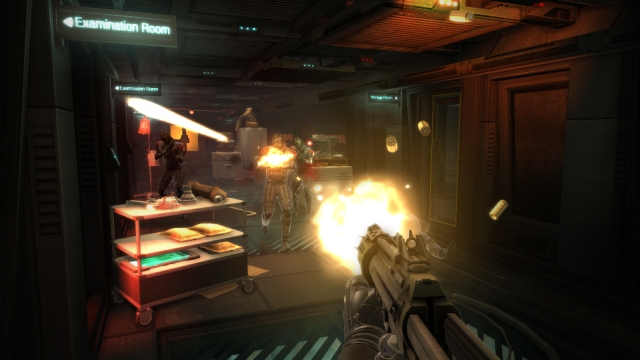 Opening a review with a disclaimer is admittedly awkward, but Deus Ex: Human Revolution practically demands that approach so here goes:

Between the time I bought this game and the moment I finally played it, Eidos released a Director's Cut that improved on a number of aspects, including boss fights and the integration of DLC stories into the main plot. My general stance on the game, as well as my accompanying score, hold true for any version out there, but I recommend grabbing the upgraded edition instead of the original release I played.

When I finished Human Revolution, my first thought was that while I'm not the biggest fan of stealth-based games in general, I could at least appreciate how this one handled things. I remember attempting to traverse a screen in the third Metal Gear Solid game when I played it a few years back. The area was littered with soldiers, and when one of them discovered me, I had to hide and wait for an alarm to cease. Then, every guard I'd dispatched was replaced with another. Certain other games were more punishing still, even going so far as to return me to a previous checkpoint. I was forced to play stealthily and that was that.

Human Revolution, in contrast, doesn't force but instead encourages. If you want, you can eschew stealth entirely, loading up on the more powerful guns and mowing down anyone standing in your way. The only "punishment" for doing so is that you gain fewer experience points. That sort of freedom is appreciated, especially since freedom is one thing protagonist Adam Jensen finds in short supply after the events that play out in the prologue.

Jensen begins the game as the chief of security for Sarif Industries, a leader in the production of mechanical augmentations. A group of terrorists promptly assault Sarif, leaving a number of scientists--including Jensen's girlfriend--seemingly dead. Jensen himself is instead maimed to the point of near-extinction. Fortunately, though, working for Sarif has certain benefits. The company's owner subjects Jensen's barely alive body to an intensive augmentation surgery, which not only saves his life but also turns him into a super cyborg with the potential to unlock all sorts of abilities. 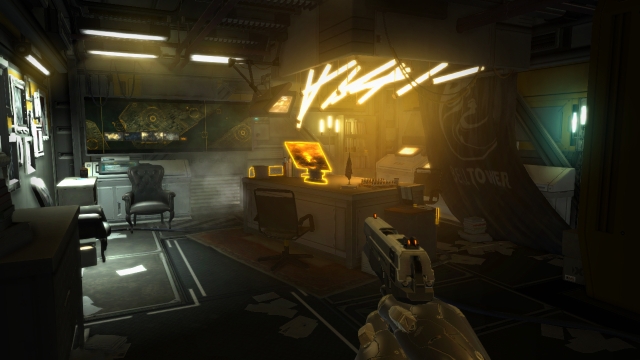 As you dive through a deep plot full of half-truths, lies and intrigue, you must decide how best to upgrade Jensen. You can buy or find a handful of Praxis kits to unlock upgrades, but most of the time it's more efficient to simply gain a few levels. The more experience you amass, the more upgrades you can unlock over the course of the game. This is where the encouragement I mentioned factors most prominently. If you whip out a gun and start blasting at a foe, you'll likely wind up with only 10 experience points when his body slumps to the ground. If you instead sneak up behind him and perform a non-lethal takedown, you'll pick up 50 points toward that next level. Make it through an entire region without any enemy discovering your presence and you'll also gain a substantial experience bonus, which makes it even more appealing to follow the sneaky path.

Of course, dodging enemies isn't always easy. Oftentimes, Jensen will find himself in large rooms with multiple foes on patrol. Since the game takes place from a first-person perspective, you can only see what Jensen can see or spot on radar. This is where proper upgrades really can come into play. By spending points wisely, you can cloak yourself and run past foes, perform takedowns on multiple adversaries, move heavy objects like refrigerators, ignore damage from electricity or poison gas, or hack your way around technological obstacles.

Hacking is almost a game unto itself in Human Revolution . To my surprise, it's also one of the most engaging aspects of this offering. All over the world, Jensen finds locked doors and computers he can hack once he possesses sufficient skill. Such actions award experience points (and potentially items and cash), and also open up a laundry list of potential tactical advantages. I could easily spend the rest of this review just talking about the myriad ways hacking helps Jensen. You can find caches of items, ammo, and weapons, for example. You can explore alternate paths that let you drop in on enemies unexpectedly. You can snag access codes. And for maximum fun, you can reprogram those pesky turrets so they gun down your opposition instead of you.

The possibilities for an adept hacker aren't quite endless, but sometimes it feels like it. The game provides numerous ways to upgrade Jensen, and then offers an abundance of ways to explore his world. If I wanted to complain, though, I guess I could talk about the easily exploited enemy A.I. Whenever I had difficulty advancing through an area, I could simply blow my cover and then lure my enemies to a nearby room, one at a time. Still, I managed to die enough times getting through tough spots that I can hardly call that possible exploit a game breaker. 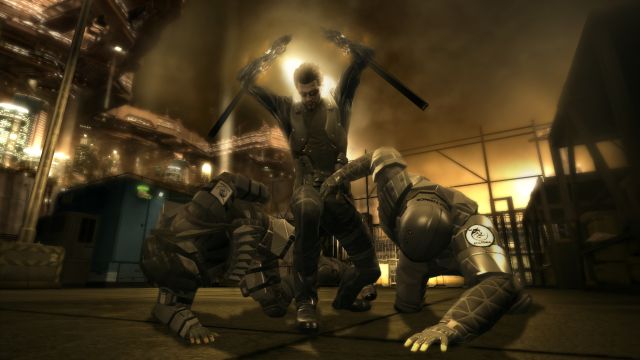 I was surprised by how much I wound up liking Human Revolution, especially given my unpleasant experiences with past stealth titles. Like I said at the start of my review, though, you'll probably want to play the Director's Cut if you take a chance with it now. That's partly because you get to enjoy the DLC without making a separate purchase, but mostly the benefit of the newer release can be summed up in two horrifying words:

This unpleasant fellow offers the game's first boss fight. What's interesting is that boss fights were outsourced to a separate development team. That proved to be a comical blunder, as whoever crafted these encounters seemed not to have known what sort of game Human Revolution is. The game's original release offers no opportunities to hack into computer systems during these fights, and there are no secret passages that will let you avoid a showdown. Instead, you find yourself in a fairly small room with only a few pillars available to provide cover as you stare down a menacing hulk with a high-powered gun grafted into his arm. If I hadn't expended two Praxis points to acquire the Typhoon upgrade, which allows Jensen to use rare and expensive ammo to produce powerful explosions, this fight could have single-handedly stalled my campaign progress. With Typhoon, I won in a matter of seconds. Without it, I had to run around, grabbing gas canisters and grenades and throwing them in the hopes of quickly causing enough damage to avoid eventually getting shredded with bullets.

The Director's Cut reworks those fights, finally allowing you to take advantage of skills such as hacking that you've likely built up over the course of the game. With the boss-created bottleneck eliminated, you're free to improve Jensen in whatever manner best suits your style, without having to worry about hitting a major roadblock you couldn't have anticipated.

And, of course, that's the best way to enjoy Human Revolution: whatever way suits you. Throughout my life as a gamer, stealth games never have been my cup of tea. Thanks to the options it provides, I'm happy to say this one is an exception to that rule.

If you enjoyed this Deus Ex: Human Revolution review, you're encouraged to discuss it with the author and with other members of the site's community. If you don't already have an HonestGamers account, you can sign up for one in a snap. Thank you for reading!

© 1998-2021 HonestGamers
None of the material contained within this site may be reproduced in any conceivable fashion without permission from the author(s) of said material. This site is not sponsored or endorsed by Nintendo, Sega, Sony, Microsoft, or any other such party. Deus Ex: Human Revolution is a registered trademark of its copyright holder. This site makes no claim to Deus Ex: Human Revolution, its characters, screenshots, artwork, music, or any intellectual property contained within. Opinions expressed on this site do not necessarily represent the opinion of site staff or sponsors. Staff and freelance reviews are typically written based on time spent with a retail review copy or review key for the game that is provided by its publisher.