What do you play in the hospital while your wife is sleeping off her surgery? A few days ago, I found myself asking that question. The answer I settled on was Bookstore Dream. It's a DSiWare title from Circle Entertainment. My choice to finally play it was quite random but, as it turns out, also the right one.

Admittedly, I was a captive audience. My wife's successful surgery had ended just a few hours previously, and the in-laws had headed to a local family member's house for the night while I stayed behind with my beloved. She was mostly sleeping and would wake up for only a few minutes here and there before drifting off to sleep again. I was merely there so she wouldn't have to wake up alone in a strange place. And when she wasn't awake, I turned my attention into running a virtual bookstore as a profitable venture.

Bookstore Dream begins by providing you with a generous budget and a mostly bare building with just a few shelves. With your allotted funds, you must pay to establish contracts with various publishers so they will let you buy and stock their books. As the business relationship improves, they'll trust you with better titles and you can work with additional groups to carry newspapers and CDs and postcards, as well. That's not how a lot of book shops work, of course. Many of them just order from a single distributor such as Ingram that takes care of all of the publisher relations on their behalf. But placing orders through Ingram wouldn't make for a particularly great game, so I was willing to forgive the developers for their occasional deviations from reality. 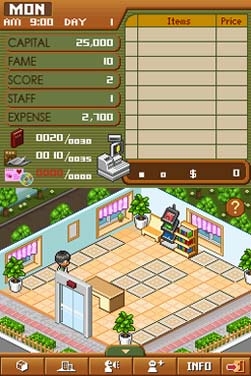 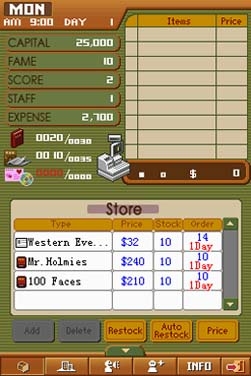 As you start carrying new books, you must decide what number of them to keep in stock at minimum, and how many to order when the time comes to replace dwindling stock. You can sell them at a discount, and you determine how many personnel to employ and what advertising campaigns to run in order to generate additional foot traffic to your establishment. You also have the option to invest in additional shelving and racks, which allows you to expand your inventory when you have the money to do so, and you can even buy comfortable furniture to put bibliophiles in the mood to spend. All of these improvements come with additional upkeep costs.

Managing the shop is actually quite simple, once you've read through the tutorial and started messing around for a bit. The whole shop fits nicely on the bottom screen, and the menus--though not especially obvious at first--make a lot of sense and facilitate the process quite well. Adding furniture isn't quite as easy as I would like, since it's easy to tap in the wrong area and thus select the wrong space with which to interact, but nothing actually gets in the way too badly and eventually you should adapt to it all just fine. Then you'll be managing things like a champ.

As the game progresses, of course, your level of capital increases. You move larger and larger amounts of inventory, and the sales figures get bigger and bigger. However, a lot of that is cosmetic. Basically, from very nearly the start of the game right to the end, you're doing the same general things and you don't need to change your strategy much at all once you find one that works. I was a clumsy manager at the start, and there were some tense early weeks when I wasn't sure what I was doing or if I would survive, but I never had a negative or even a $0 balance and I didn't even come close to losing. 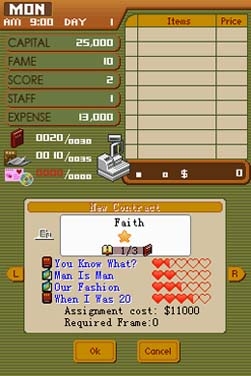 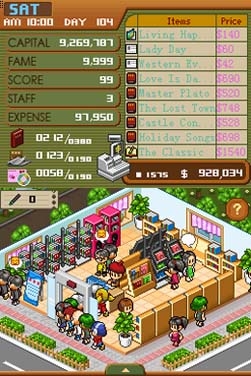 The simulation campaign lasts 99 in-game days, during which you'll see the same cheery sprites and artwork and listen to the same background music and assortment of simple sound effects. Then you get a horribly translated screen congratulating you and encouraging you to pursue your real-world dreams. If you want to keep playing from there, well, you can't. You can only load your save and play through the last day again, or start a new trip through the game from scratch.

Bookstore Dream lasts somewhere around 7 or 8 hours if you play from beginning to end, which is plenty of time to see absolutely everything the game has to offer if you catch on early. It's a mostly enjoyable campaign, even though it does get repetitive by around the halfway mark and there is a fair bit of downtime where you're just watching sales ring up and hoping a lot of people are buying. If you're into micro-management simulations, you'll likely find it rather shallow and repetitive but still competent and even quite enjoyable for long stretches.

When I chose to play Bookstore Dream on a whim in the hospital that night, it kept me relaxed and entertained for as long as I needed it to and the time I spent with it passed quite quickly. The game was almost exactly what I expected and hoped for when I bought it a few weeks previously, without any major surprises working either for or against it. As I recall, it only cost me $2 or so to download, and at that price I'd say it's worth every penny I spent and more besides. Definitely give it a shot.
3/5

If you enjoyed this Bookstore Dream review, you're encouraged to discuss it with the author and with other members of the site's community. If you don't already have an HonestGamers account, you can sign up for one in a snap. Thank you for reading!

© 1998-2021 HonestGamers
None of the material contained within this site may be reproduced in any conceivable fashion without permission from the author(s) of said material. This site is not sponsored or endorsed by Nintendo, Sega, Sony, Microsoft, or any other such party. Bookstore Dream is a registered trademark of its copyright holder. This site makes no claim to Bookstore Dream, its characters, screenshots, artwork, music, or any intellectual property contained within. Opinions expressed on this site do not necessarily represent the opinion of site staff or sponsors. Staff and freelance reviews are typically written based on time spent with a retail review copy or review key for the game that is provided by its publisher.