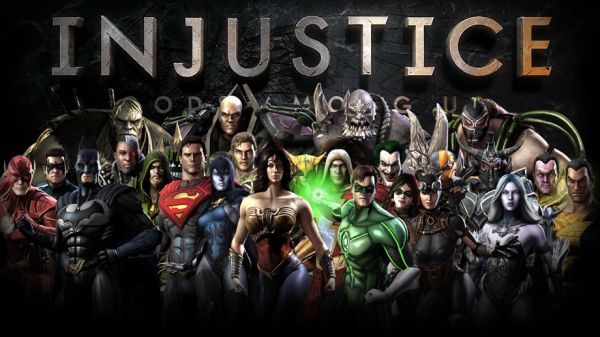 I tend to drag my feet when it comes to tackling another fighting game, thanks to a combination of the expectations I place on myself and the understanding that those expectations aren't realistic. Because I have years of experience with the genre, I like to envision myself cracking skulls, pulling off sweet combos, and deftly maneuvering around my foes' offensive bids without even a modicum of practice... Instead, my first few sessions are typically fraught with bumpy performances and copious amounts of swearing.

One day, however, I picked up Injustice: Gods Among Us - Ultimate Edition and forced myself to finally play it before it had the chance to gather cobwebs. I figured I'd spend an enjoyable few hours while sucking as Batman. After three hours, though, I already had the Dark Knight's move set just about down pat and I was in the process of annihilating the game's roster as Bane. Truly, Injustice and I were made for each other.

I know, I know. It could just be that the game is beginner friendly, but I prefer to believe there's a connection between us. For the most part, it plays similarly to Mortal Kombat, except with a lineup comprised of DC heroes and villains. These include Superman, Wonder Woman, The Flash, Lex Luthor, The Joker, and Sinestro. As in the aforementioned gory tournament fighter, the Injustice combatants possess a single basic move set that mostly differs only cosmetically. It doesn't really matter if you're playing with Catwoman, Ares, or Martian Manhunter; clobbering your opponent into the air requires you to press the same button combinations. Even if you ignore the tutorial, the game's intuitive control scheme makes acclimation a snap. 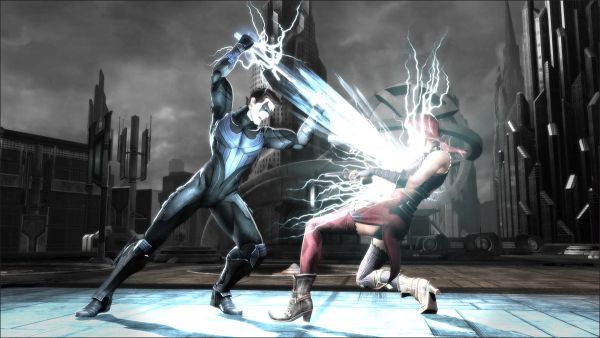 With a learning curve this lenient, you'd think the game would be a breeze even on demanding difficulty settings. The truth is that Injustice can and will destroy you and everything you love, given the opportunity. When a stiffer difficult rating is selected, one slipup allows the computer to grind you into a thick jelly by using endless combination strikes and special moves. As you can likely imagine, blocking and combo mastery are paramount in this title. In regards the latter, I don't mean the old "jump through the air, kick to the face, crouch, two quick blows" multi-hit trick, either. You've got to learn to juggle and make every wallop count, as well as know precisely when to block. Put up your guard too early and you'll only manage to make yourself susceptible to crushing throws.

Thankfully, there is a moderate difficulty setting that provides the best of both the higher and lower ratings. With a middling challenge, you get a marriage of easygoing gameplay with a little added bite. The game might knock you senseless now and then, but you'll find that you aren't struggling to keep up with the computer player's insane string of unstoppable biffs. 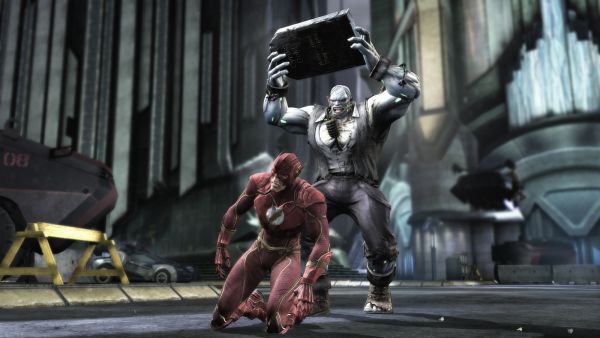 Let's face it, though: I mainly play modern fighting games for one reason. I see it every time I send Nightwing crashing through the exterior of Wayne Manor, smashing his way through several rooms before painfully skidding along the roof and colliding with a massive spire. I see it also when I watch Doomsday launch a super move against an unsuspecting do-gooder, wherein he pummels his adversary through the center of the earth and out into the depths of an ocean on the other side of the globe. Games like this I play for moments such as the one when Cyborg sails through the air and smashes into a background object, or when I throw an automobile at Hawkgirl, or I lob Solomon Grundy onto Ares' battle axe or witness a great white chomp Black Adam while he's impaled on Aquaman's trident... Call me a simpleton, but I prize brutal slams and flashy assaults in my fighting games, and Injustice delivers them in spades.

I tend to not care much about bonus modes or unlockable skins or artwork in games such as this one, but the developers just had to go and do something drastic like provide modes that are actually enjoyable and alternate costumes worth scoping out. I mean, come on! They've got Joker in the Red Hood getup and Harley Quinn's classic red-and-black spandex, not to mention Wonder Woman's #600 look and Cyborg Superman. Additionally, there's a 300-stage mode called STAR Labs, which offers you various challenges with different objectives and constraints for each character, not to mention a story mode that doesn't blow.

No, really. I was actually a little hooked to the game's plot, wherein Batman and a handful of other Justice League members inadvertently travel to an alternate reality where Superman has gone nuts because of Lois Lane's death. By "nuts," what I mean is that he "murdered Green Arrow and The Joker, pummeled all of the supervillains into submission, conquered the world, established a dystopia, and then intimidated his companions and any compliant villains into working for him." Only three warriors dare to defy him: Batman, Lex Luthor, and Deathstroke. It's intriguing to watch the cast interact and cross paths, and especially to see old superheroes reimagined as enemies. 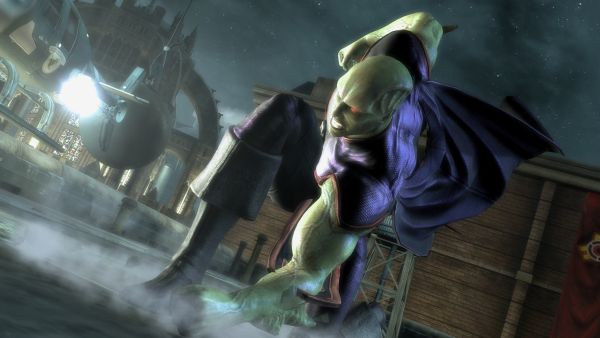 Thanks to Injustice, I won't be so hesitant when the next DC-themed fighting title arrives. The game features all of the fixings that a descendant of Mortal Kombat should: simple mechanics, a low learning curve, bone-shattering strikes and combos, and multiple modes that are actually worthwhile. You know what this means, right? Supes, you're officially forgiven for starring in Superman 64. Now, do more of this and less of that and maybe I'll even burn the part of my brain that remembers Superman 64 even exists, so I never bring it up again

If you enjoyed this Injustice: Gods Among Us - Ultimate Edition review, you're encouraged to discuss it with the author and with other members of the site's community. If you don't already have an HonestGamers account, you can sign up for one in a snap. Thank you for reading!

© 1998-2021 HonestGamers
None of the material contained within this site may be reproduced in any conceivable fashion without permission from the author(s) of said material. This site is not sponsored or endorsed by Nintendo, Sega, Sony, Microsoft, or any other such party. Injustice: Gods Among Us - Ultimate Edition is a registered trademark of its copyright holder. This site makes no claim to Injustice: Gods Among Us - Ultimate Edition, its characters, screenshots, artwork, music, or any intellectual property contained within. Opinions expressed on this site do not necessarily represent the opinion of site staff or sponsors. Staff and freelance reviews are typically written based on time spent with a retail review copy or review key for the game that is provided by its publisher.